Discourse on the Sunday after Theophany

Metropolitan Meletios of Nikopolis and Preveza (March 3, 1933–June 23, 2012) is a well-known hierarch of the Greek Orthodox Church. In 1959 he graduated from the theological department of Athens University. He was ordained a deacon and then priest, preached in the Messina metropolitanate, and served as secretary of the Synodal representation. On March 1, 1980 he was consecrated a bishop with the rank of metropolitan of Nikopolis and Preveza. He participated as chairman of the Church of Greece’s work on the Inter-Orthodox preparatory commission for one of the Pan-Orthodox pre-council meetings on December 11–16, 2009. He is the author of ecclesiastical works entitled, The Fifth Ecumenical Council (which received an award from the Athens Academy of Sciences), The Mark of Antichrist in Orthodox Tradition, and How did I come to know Christ?

The following sermon was given by Metropolitan Meletios on the Gospel reading (Mt. 4:12–17) on the Sunday after Theophany, January 14, 2007. 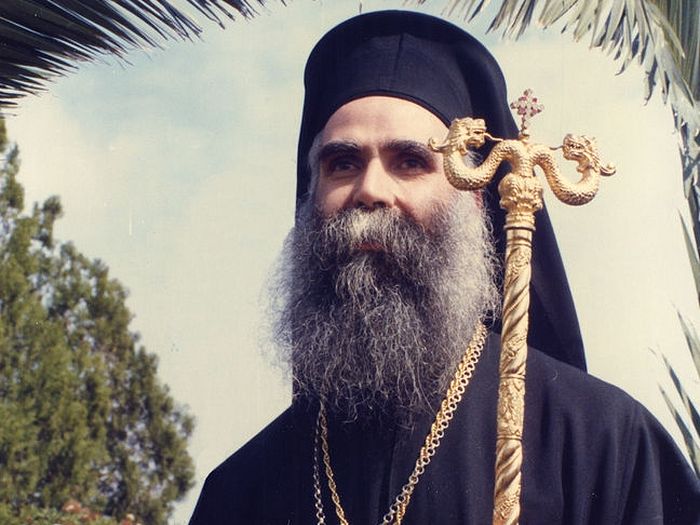 Are we spiritually close to Him?

We have celebrated the great feast of the Theophany. Christ came to us, having become a man, walked in the world and arrived at the Jordan, where He was baptized for our sake, for the sake of our salvation.

How does this happen? Let us take a look at this, because we need to know it. It is connected with our salvation.

We hear the Gospel words: The people which sat in darkness saw great light (Matt. 4:16). Christ—the Great Light—is walking amongst them. I see this, you see this, because He walks as a man. But how do you see it? Do you understand what it is? Do you love it? Do you allow it into yourself? Do you allow Him to change your life?

Remember what the Gadarenes said to Christ when He healed their demoniac compatriot who had become extremely dangerous? “Depart from us, go somewhere else. You are a liability to us, because you have made our swine drown.”

To whom did they say, “Depart”? To the Kingdom of God! To the One Who came to bring with Himself eternal life, the eternal Kingdom of God. To us. To save us.

They loved Him and glorified Him. And the former demoniac asked that he might be with Him (Mk. 5:18). But there were others who said to Him, “Depart from us.” 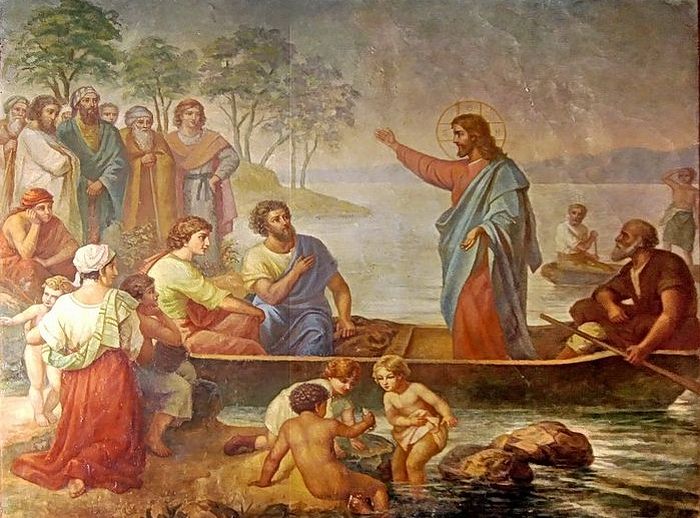 For what did God give us life? So that we would satiate our bodily needs? Satiate with what, my blessed one? With food? With sins and fleshly delights? With a car and a house? But what does the Gospel say? There lived a rich man who did not know where to put his goods. And when he finally found what to do with them he said, Soul, thou hast much goods laid up for many years; take thine ease, eat, drink, and be merry. He died that same night, as soon as he said to himself, take thine ease. And God said to him, “You fool, now whose shall these things be? Why did you destroy you soul? What of this will you eat now? With what will you satiate yourself? (cf. Lk. 12:16–20).

Let’s say a man has lived a hundred years and ate and drank his fill. He never lacked anything. What can be done when he sinks to the level of that rich man, who when he died fell forever into hell and burned there so intensely that he dreamed of at least a drop of water? Therefore, my brothers, the greatest wisdom and understanding for a man consists not in appearing smart here to a few people whom it takes little to impress, but in being wise “in God”; to open our eyes to our eternal salvation; to know faith, the true God, the meaning and worth of eternal life.

Christ, the God of Glory, came into the world and humbled Himself for our sakes. We emphasize: He humbled Himself. Even worse than when we hunger or lose something do we consider—and justly so—that it is a great evil to be despised, to not be loved, to receive no sympathy. But Christ endured all of this for our salvation.

Baptism of the Holy Spirit

We mustn’t forget that when someone begins to fall spiritually, he drowns. In what does he drown? In sin. In this case we say and believe that, “He drowned in evil, in sin, and in corruption.”

What does this mean? The lips? Foul-smelling! The eyes? Evil! The hands? Foul-smelling! The whole body is foul-smelling. The soul and the heart are foul-smelling! Hasn’t this person drowned in evil? Haven’t we often met people who have drowned in sin? What would we say about such a society? Isn’t it a jungle? When it is impossible to trust even your friends—for example, one who you consider your near and dear friend. You let him into your house, and he comes at night to rob you. You trust him, but he makes an attempt on your wife and children. Why has life become a jungle? Because the soul and the heart have become a morass. They have turned into a quagmire, because they did not seek the Light of God and did not try to learn what God’s will is. 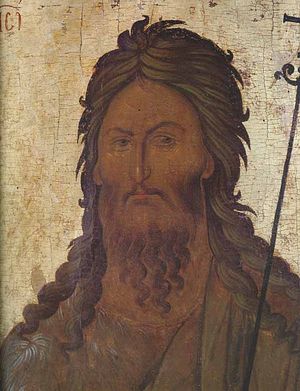 St. John the Baptist; 14th c. Byzantium. Mt. Athos.
Therefore, brothers, we understand how wise were the words of Christ and His Forerunner when they first opened their lips to teach us, saying, Repent, for the Kingdom of Heaven is at hand; which as we already said means, “Change, correct your consciousness. Open your eyes. And when you open them to the light of Christ and repent, then ‘I will baptize you with the Holy Spirit’ (cf. Matt. 3:11).”

What is Baptism? Let’s take a child and totally immerse him in the water, so that there would not be a single spot on him that the Baptismal water had not touched. Why do we say this? For example, someone has fallen into filth. He climbs out, and what does he look for? Water. A lot of water—to clean himself once, twice, three times, so that the dirt would be completely removed. The better he washes himself and no longer smells the foul odor, the more he says, “Glory to Thee, O God! I am cleansed.”

In this manner, as Christ tells us, we should also be immersed, which is what “baptized” in the Holy Spirit means. It cleanses away the trifles of our life, so that they would be fragrant before God, so that they would become bright. So that we would understand them, so that we would see where our inclinations and desires lead us, and where God wants to lead us together with His word, His instructions, His wisdom, His love, and His goodness.

Thus, baptismal water has the meaning of washing our souls and hearts. Otherwise we show that we do not give our hearts over to the action of God’s will, we do not given it over to become bright. Nevertheless, how does this Baptism by the Holy Spirit happen? The Baptism that we received as little children is the Baptism of the Holy Spirit from the beginning. We are not baptized with ordinary water. Washing with clean water means nothing. We are baptized by the Holy Spirit and receive so much grace that it cannot be measured by any standard.

But then we spoil everything. How? The answer is simple: Because we do not take care for what is spiritual. And we say, “Forget about what was written in the Gospel. It’s too hard. Forget the rest, it’s too exhausting. Let’s sin. Otherwise life is not interesting. We have to fast on Wednesdays and Fridays? We have to go to church on Sundays? But when are we supposed to rest?” With this, evil begins to penetrate the soul. And when in gets inside we begin to slip, fall, and get covered with the filth of sin. Let us listen to the message that our Lord Jesus Christ left us on Holy Theophany when He came and manifested Himself to the world, to us. Let us listen to the words of His Heavenly Father, by which it was confirmed to us that He is His Only Begotten Son, Whom we should hear. 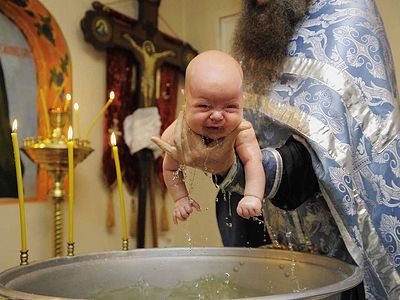 From the font wholly cleansed
A discourse on the Mystery of Baptism
Archpriest Artemy Vladimirov
There are such events and milestones in the earthly life of man that define his future—both in the temporal and eternal perspectives. Baptism, undoubtedly, is just such a turning point in the historical progression of the world.

A Practicing Christian
Fr. Stephen Freeman
Christianity should be seen not just as a set of beliefs, but as a set of practices. 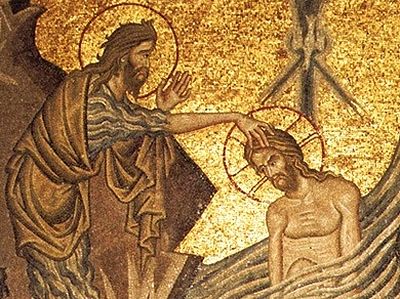 Epiphany
The sixth of January is the feast of the Epiphany. Originally it was the one Christian feast of the “shining forth” of God to the world in the human form of Jesus of Nazareth. It included the celebration of Christ’s birth, the adoration of the Wisemen, and all of the childhood events of Christ such as his circumcision and presentation to the temple as well as his baptism by John in the Jordan.
Комментарии