IOCC Reaches Out to Fijians through OCMC Family in New Zealand 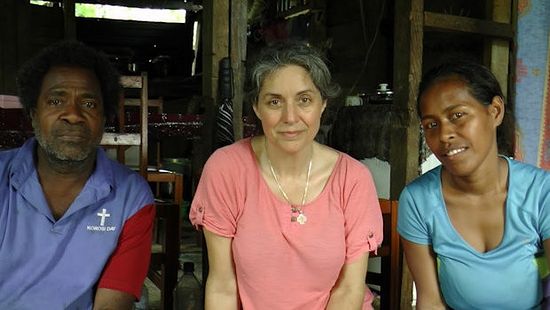 Recently I had an opportunity to chat with Presvytera Katerina Patitsas who is serving along with her husband and children in Auckland, New Zealand through the support of the Orthodox Christian Mission Center, (OCMC).

His Eminence Archbishop Amfilochios, the Metropolitan Archbishop of New Zealand had requested aide and the International Orthodox Christian Charities (IOCC) had designated some emergency relief money to help people in Fiji after Cyclone Winston last February. It was the most devastating weather disaster in recorded history for Fiji Islands.

People from all walks of life from around the world come toFiji for vacation, to relax, to experience the ocean and see what’s in it. Ironically most tourists miss the best part which is Fiji’s people. Fijians are islanders in the truest sense; sincere to smile and wonderful to engage. They are themselves relaxed honorable people and humble. They greet you with the word “Bula.” It means life. As Aloha is used in Hawaii, it is used in many ways. The sound of it is enough to make you smile.

What did you do during your visit?

I had been in Fiji for roughly 3 weeks doing some catechism and meeting people at the compound of the St. Tabitha Orphanage and Holy Trinity Church in Saweni in Viti Levu Island. I had traveled alone to Vanua Levu, to meet the family of Father Barnabas who is the priest of Saints Nicholas and Athanasios parish in Labasa (pronounced LAMBASA). Gracious from beginning to end, this family is bringing many people to the Orthodox Faith. Father, however, was interested in getting aid to the poorest of the poor and he worked hard interviewing people to find the people who were still in need. He is well connected socially and as a community leader, so he was able to find the people we were looking for. Father Meletios of the Holy Archangels Monastery in Levin, NZ was also with us. He had worked with me on reconnaissance, and preparation. 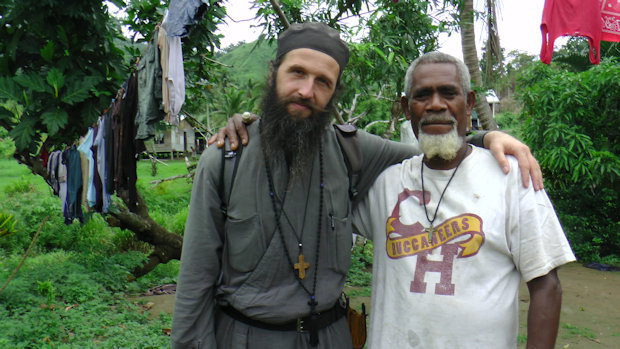 Basically, we had divided into three tasks. Father Barnabas scouted for people in need, talking to government officials, people in the farmer’s markets, and other businesses. I then explained the origin of IOCC and our purpose. I interviewed the individuals to see what kind of aid we could provide. Father Meletios worked with people as I did, and served as a prayerful advocate for those in need. He also helped us determine our priorities as they arose. He had done the initial investigations with Father Barnabas as well.

Was IOCC able to make a difference to the Fijians as they continued to rebuild their homes after Cyclone Winston?

If I tell you that a typical village home is a one room house made of corrugated steel and some wood, you might wonder what their temporary housing looked like. China had fortified many families with tents. Others were living with family members making their homes more tent-like. These people were extremely hospitable but stressed. Some were making due with their fallen walls and broken foundations.

We had some guidelines to go by so that the aid we were giving could have a positive effect on more families. We tried to conserve as much money as possible – like when we were negotiating the cost for customs fees by independent customs agents – so that more could go to the people in need. We also conserved what we ate and received a donation of our hotel stay while we were in Savusavu. The Church provided accommodations for us on the large island while in transition to the more remote areas. Mainly for those to whom we were giving, we counted how many lived in the household and gave accordingly.

The stories were wild, like the young family who ran out of their home just as it was sliding down a muddy bank or the woman who was in the hospital when the cyclone hit and she came home to rubble. In her village, the members kindly organized the rubble from her home and she needed to find a carpenter to put it back together. Another tried to hold down his roof while the wind was lifting it away. He did not succeed.

What are the benefits of waiting six months to take aid?

It seemed fortuitous that we came to the scene a little late with our contributions; the storm occurred in February of this year and we were visiting in August. This delay meant that we could scout out people who were missed by other aid workers, or who just slipped through the cracks of care, by missing deadlines, or some other mishap.

Was it hard to find people still in need and to have the proper supplies?

Basically, the Church found people. Father Barnabas walked the streets of Savusavu and asked around. He also approached government agencies. He asked how people’s villages were doing and if they knew of anyone who needed help. No one said, “Yes, I do.” Some were quick to say, that everyone in their village was fine.

Before departing for our trip, we had heard from Fr Barnabas in Labasa that chainsaws were needed in several villages, as they were still clearing away trees from wooded areas and from atop homes. The city workers were not able to get to them either because it was not their territory, or they were busy still working in common areas. 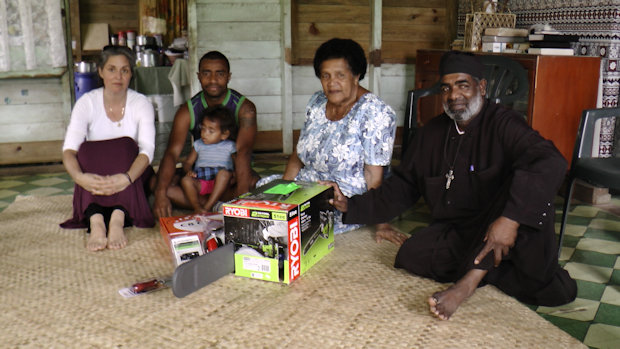 One interesting experience was when we met with the Woman Chief of the Village of Savudrodro in Vanua Levu Fiji. She was a gracious woman, beautiful, around 80 years old. She dressed rather formally to meet us in traditional Fijian dress. We sat on her grass mat and she listened to the story of IOCC and how this aid and the gift of a chainsaw came to her village. We also agreed that anyone who would attempt to use a chainsaw that IOCC provided would also watch and discuss a training video on how to stay safe while operating a chainsaw. We provided the video.

Can you describe their responses?

We expect feedback from the people who were given chainsaws and Father Barnabas and I are going to do follow up. As for people who received a cash donation to rebuild, they were quite pleased. One woman waits for her husband to sell fish that he catches on his own. He uses whatever extra money that he has to buy building materials to rebuild his house himself. By August he had only set up a wood frame. She was tremendously grateful. 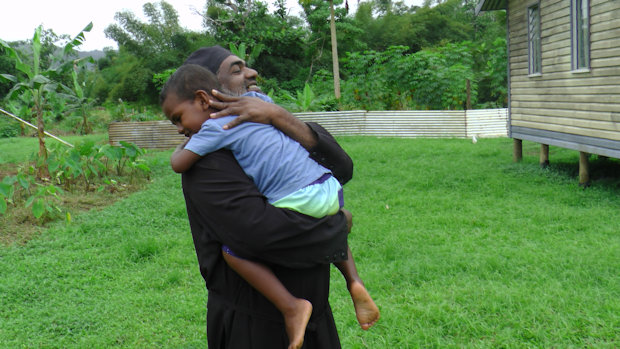 Fr. Barnabas greeted by a child.


Did IOCC ship the materials you needed?

Donations to IOCC made this aid possible. Most materials were purchased on location for this avoiding shipping costs, except for the chainsaws which we bought in New Zealand as chainsaws in Fiji run about 3 times the cost of them in NZ.

Please describe your experience in Fiji.

More than anything, what I felt from those receiving funds is one of hope and faith in their fellow man. The IOCC gifts came as help that their government could not provide for them and in many cases as an answer to prayer. It was special to see how these people felt remembered and how that touched them. Personally, I worked as a servant of those who donated, and as a servant of those who received. I wanted them to know and feel that I was just as blessed as they were to be on the giving end: something that perhaps I did not earn, but appreciated to the depths of my heart. 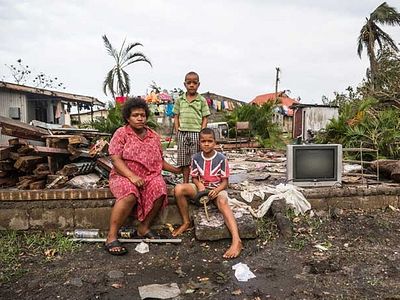 IOCC Responds To Families Devastated By Cyclone In Fiji

IOCC Responds To Families Devastated By Cyclone In Fiji
International Orthodox Christian Charities (IOCC) is responding to the devastation caused in the South Pacific island nation of Fiji by Tropical Cyclone Winston on February 20, 2016 with reconstruction assistance to families who have lost their homes. Houses, especially along the coast, were battered by both Category 5 cyclonic wind and tsunami-like storm surge. An estimated 40 percent of the population was affected by the cyclone and are now in need of assistance. 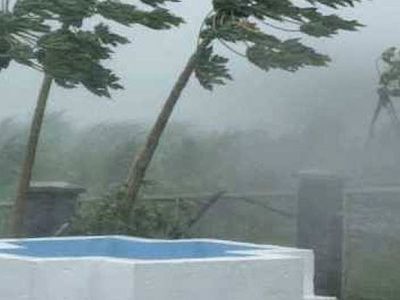 Cyclone Does Not Deter Mission Work in Fiji
Archimandrite Christodoulos Papadeas
The Church is alive and well now in Labasa and nearly 100 men, women and children have been baptized – including the 23 that we baptized on this trip. The baptized couples have also now been wed. 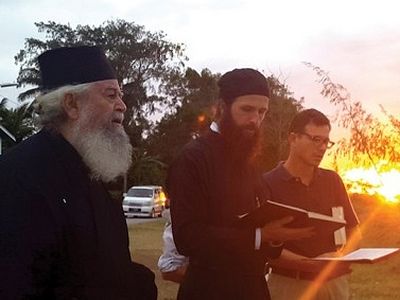 I Came to Cast Fire Upon the Earth
Bishop Amphilochios of New Zealand
With the help of our Good God three projects have been completed in Fiji: the majestic Holy Trinity Sacred Church, the St. Tabitha Orphanage and the Home for the unprotected women known as “Safe Home”.
Комментарии