Shocking Conditions of Refugee Camps in Greece as Winter Sets In

At the foot of Mt. Olympus lies a place called Petra, where a make-shift refugee camp has been set up comprised of tents that house hundreds of refugees. In all, 240 people, including many women and children woke up to a fresh blanket of snow and ill-prepared to handle the conditions.

An aid worker, Paul Carr, turned to Twitter to ask for help in providing refuge to these people. He posted photos f snow-covered tents and refugees walking in nothing but socks in the icy conditions. (Photos at the end of the story)

Tatiana Diego, a volunteer from Spain at Petra told The Pappas Post via email that many refugees were seeing snow for the first time and were ill-prepared to deal with the conditions. She also reported that several had frostbite and appealed to the Greek government to respond quickly to urgent cries for assistance.

On the island of Chios, gale-force winds left about 200 people without cover as tents were blown away and torrential rain created pools of mud in already squalid conditions following firebomb attacks last month by far-right attackers.

The Greek Orthodox Metropolitan of Chios, Markos, pleaded with several church communities to open up their auditoriums and public spaces for temporary shelter for the homeless refugees but all four refused.

“Unfortunately I asked but because of ‘logistic reasons’ the parishes refuse to offer their public spaces to house the refugees,” Metropolitan Markos said in an interview with a local online newspaper called PolitisChios.

Manolis Vournos targeted his frustration with the Greek government, noting that “unfortunately the minister (in charge of the refugee situation) has yet to respond to us about the transfer of 200 people to mainland Greece,” following the devastating wind storm that left so many homeless on Chios.

The mayor continued that “It’s obvious that in the future, as has been the case in the past, the local communities must pick up the burden from an absent national government.” 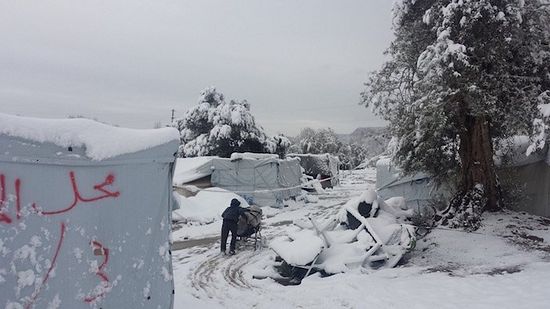 The International Rescue Committee (IRC), one of the leading aid agencies supporting the refugees in Greece said that freezing temperatures and poor infrastructure is putting lives at risk and Europe, as well as Greece, must act quickly.

“No-one should have to endure the harsh cold of winter in an unheated camp or an overcrowded facility anywhere in Europe. The failure to provide appropriate accommodation and basic assistance for this relatively small caseload is a sad example for the rest of the world. EU leaders must take action to ensure that no refugees remain in substandard conditions this winter,” said Elinor Raikes, the IRC’s Regional Representative.

Current EU policies appear to be designed for the sole purpose of deterring spontaneous arrivals, with little consideration for Europe’s responsibilities or humanitarian consequences. The result is the continued loss of lives in the Mediterranean, thousands stranded on Greek islands in inhumane conditions, and the vast majority denied effective access to safe and legal routes to protection in Europe, according to the IRC.

The IRC further suggested that Greece should immediately close mainland refugee camps that are not safe to accommodate people in winter, including numerous warehouses and tented sites and to transfer all those who have the necessary paperwork and wish to move to the mainland, in order to decongest the overcrowded facilities in places like Lesvos and Chios.

ChiRho 7 декабря 2016, 07:00
What a bunch of leftist propaganda. I'd read the New York Times, BBC, CNN, or whatever website does official press releases for the German government if I wanted to be manipulated into thinking armies of Muslim supremecist invaders were the victims. If The Pappas Post had any sense, they'd realize that carrying water for the Euro Elites isn't as secure of a job as it used to be. They're on their way out.

Allan Wafkowski 6 декабря 2016, 18:00
Blame falls on those who allowed these immigrants into their countries and to the immigrants who thoughtlessly came to areas they had no understanding of. What is to be expected, first-call hotels?

Robert Minor 6 декабря 2016, 03:00
Are these Syrians? Mohammedan Syrians? Someone should have told them that Saudi Arabia was a lot closer and warmer.

Anthony 5 декабря 2016, 20:00
Manolis Vournos targeted his frustration with the Greek government, noting that “unfortunately the minister (in charge of the refugee situation) has yet to respond to us about the transfer of 200 people to mainland Greece Maybe Manolaki should target his frustration at Britain Amerika and Merkel. They are the cause of this disaster. The Greek government can't look after its own people and is expected to care for these foreigners whose countries the western white man colonised and destroyed. Not our fault. Not our problem. Transfer them to Britain. Transfer them to Germany. Transfer them to Amerika.