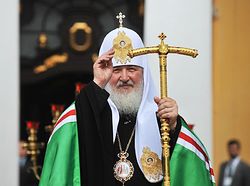 On July 27, 2010, His Holiness Patriarch Kirill of Moscow and All Russia gave an interview to reporter for the Russian National Television and Radio Company, I. N. Semenov. Below is the full text of the interview, released on July 28, the Day of the Baptism of Russia.

– Your Holiness, your second major trip to the Orthodox Ukraine is drawing to an end. How has the country changed in this year, and what are the brightest impressions you will take away?

– The country has changed, and has changed greatly. One can tell that the people, the Ukrainian society are entering a period of stability. Actually, something similar happened Russian society also at the turn of the [21st] century. There are many commonalities in the post-Soviet development of many countries on the vast Eurasian land, the former Soviet Union.

I rejoice in the fact that a period of stability is coming, and the people are settling down, and this means that there will be more opportunities for work towards solidarity. It is only possible to come out of a difficult situation—be it economic, social, or political—on the basis of solidarity, when people help one another to move forward. I have not so much seen as felt quite a different atmosphere in the country, and this makes me confident that the Ukrainian people will, in the very near future, overcome much of what needs to be overcome in order to build a more just, peaceful, and prosperous life.

– This year you visited some regions you had not seen last year. Is there any difference between the piety of Odessa and of Pochaev, for example?

– I have not seen any difference in their piety. There is of course an external difference, as these territories may have experienced different cultural influences. But as for the people’s piety, it is the same on the Black Sea coast, and on Pochayev hill, and in every other place. There is such a vivid and strong manifestation of religious feeling that it takes your breath away. It is easy to pray together with the Ukrainian people, who live historically in the place from which proceeded Holy Rus’.

– You have met with representatives of almost all the branches of power in Ukraine. About what did you speak?

– About many things. We exchanged opinions on the developments in Ukraine today. I shared some of my thoughts and experiences, and heard very interesting things that people had to say, including very right and reasonable thoughts about the organization of life in Ukrainian society. All this is very important for me as a pastor. I assess developments not from a political point of view; I am not an economist and cannot make any economic analyses. But as a pastor, I am, of course, attentive to what goes on in people’s souls and consciousness, and I am satisfied with the level of dialogue with Ukrainian officials and representatives of the Ukrainian public. I have had a chance to meet many people, including local politicians, representatives of the business community and intelligentsia—scientists, engineers, metallurgists—all those who create real wealth.

– Some wondered why Ukrainian President Victor Yanukovich, who has assumed his post quite recently, was immediately given a high award of the Russian Orthodox Church. For what achievements?

– He was granted this high order on the occasion of this 60th birthday. It is an important jubilee in the life of Victor Fedorovich. I should tell you that as a statesman he relies on the Orthodox worldview. He is a profound believer, and, under the law and constitution, as befits a President, he serves the cause of the spiritual enlightenment of his people, through the means available in his high position. The Church appreciates these efforts of the Ukrainian President, and it was with full responsibility and profound satisfaction that I awarded him this high order of the Russian Orthodox Church.

– Your Holiness, the Russian Orthodox Church has initiated many public projects on the Church-wide scale, while being located in different countries. Are there any difficulties which arise from legislative differences in these various countries? For instance, the Department for Social Work and Charity has launched many Church-wide projects in Russia, Ukraine and Byelorussia. Will there be differences in the implementation of these projects?

– There may be differences, but we are quite accustomed to them. The Church is 2,000 year old, while the Russian Church is 1,000 year old. The Church has come through various political systems, and always lived in different legislative fields, to put it in modern terms. What could be done in one place was not always easy to do in another. This is true for the life of the Church assessed on the scale of time.

But on a geographical scale? Certainly, there are also differences. But the most important thing, for which we should thank God today, is that in all the countries of the canonical territory of the Russian Orthodox Church, people have the full opportunity to freely confess their faith and to live as Christians not only in their private or family life, but also to express their Christian beliefs in public life. I believe this to be the most important thing. For this we thank God.

– Your Holiness, here in Kiev a meeting of the Holy Synod of the Russian Orthodox Church took place, and, among other things, it adopted an appeal to believers in the Ukraine who are regrettably still in schism. This appeal unfortunately lacks any practical recommendations for coming out of schism. A few days ago Ukrainian believers asked me to ask you what practical actions you advise those who wish to come out of schism to take. How can they bring forth repentance? To whom should they turn? Do you plan to give some practical recommendations to those who wish to come back from the schism?

– First, thank God that this process has already started, and thousands of people are coming to local priests and bishops; many receive Baptism in the awareness that the ‘baptism’ which was administered to them does not have the grace of God. Priests are coming over. Certainly, however, all these moves have not yet been on a mass scale, for a number of reasons.

First of all, people are afraid. It seems to some that repentance is a judgment with a jury. We should repent before God every day. Repentance should be brought both by those who claim to be righteous, repenting perhaps for their purely spiritual pride, and by sinners. Even imprisoned criminals repent. Repentance is our main spiritual power, through which every one of us becomes better. Therefore, repentance does not mean subjecting oneself to a public ‘whipping’—the thing people fear, and disagree with. It is because many found themselves in schism against their own free will. Besides—when a child comes to his parents to admit that he did something wrong, does it lead to aggravation in family relations? On the contrary, the parents show love and help this child. The Church, as I have repeatedly stated, is a community of healing in which healing is offered to all, including those who experienced the tragedy of schism.

Therefore, I would like to say to all those who are listening to me now: you should not hesitate. The most terrible thing is to die in schism. The most terrible thing is to deprive yourself of God’s grace. It is necessary to return from schism to the Church, to take the Sacraments, and, with the true gift of the Holy Spirit given to people only in the Church, to make up for all that was only externally received in the schism.

I greatly hope that this process of people’s reuniting with the one saving Church will ultimately lead to the full disappearance of the schism. This is not only the case in the Ukraine; it has happened before in Russia and in many other places, and the Church has always found the strength to restore unity and the fullness of grace-giving life through prayer and repentance.

– We are talking on the eve of the Day of St. Vladimir Equal-to-the-Apostles. From this year on it will be a public holiday in Russia. Some representatives of civilian society do not much like it, saying that is a continuation of a “clericalization” of public life, and that the Church is invading public spheres that should be secular. What can you say in response to these people?

– Almost nothing. This attitude borders upon a sort of delirium. If we deny the historical significance of the Baptism of Rus’, we should reject the supporting pillar of our civilization; because we as a nation were formed through the influence of that most powerful spiritual tradition which proceeded from the Baptism of Rus’. Those who speak that way do not themselves belong to this tradition, of course. It is their right. But they have no right to deprive an absolute majority of people of their historical memory. Indeed, it is not possible for them to do so. 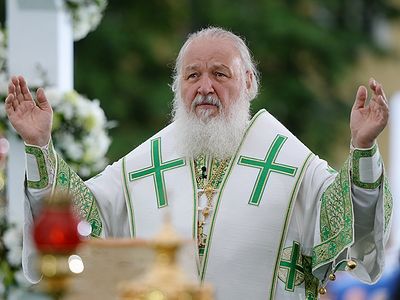 Patriarch Kirill: “We are praying for the Ukraine. This is a great sorrow for us”

Patriarch Kirill: “We are praying for the Ukraine. This is a great sorrow for us” “We call it a fratricidal battle, that is, the same internecine war that took place in ancient times. But today it is greatly aggravated by a whole series of external circumstances, which many of us are aware of.”

A Letter from His Holiness Patriarch Kyrill to Patriarch Bartholomew on the Real Situation in the Ukraine In recent weeks we have received reports from local bishops indicating abuse of canonical Orthodox clergy as they carry out their pastoral duties.
Комментарии
Войдите через FaceBook ВКонтакте Яндекс Mail.Ru Google или введите свои данные: