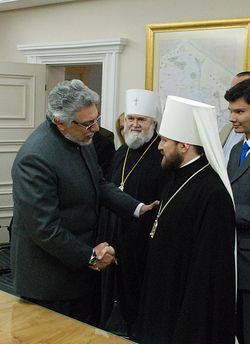 On July 1, 2011, Metropolitan Hilarion, head of the Moscow Patriarchate’s department for external church relations, met with President of the Republic of Paraguay Fernando Lugo at his residence in Asuncion.

During a friendly talk, which lasted over an hour, the DECR chairman conveyed to the president a written message of greetings from His Holiness Patriarch Kirill of Moscow and All Russia on the occasion of the 200th anniversary of the republic. He also explained the structure of the Russian Orthodox Church, her present situation and the life of her parishes in Latin American countries. Both sides pointed out the contribution that Russian emigrants made in the cultural life of the country and their participation in the 1932-1935 Chaco War.

Another topic they considered was cooperation between the Orthodox and the Catholics in defending traditional Christian values in the modern society.

Mr. Lugo showed a deep interest in the Russian spirituality and culture when they talked about Russian religious philosophy and the main themes tackled by such brilliant representatives of this philosophy as V. Solovyev and N. Berdyaev.

In the conclusion of the meeting, the DECR chairman presented Mr. Lugo with a copy of Patriarch Kirill’s book Freedom and Responsibility in Spanish and an icon of Our Lady produced by the Moscow Patriarchate’s art shop.