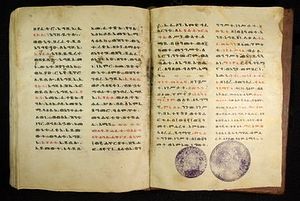 Steve Delamarter, the George Fox University professor who digitizes Ethiopian religious manuscripts and returned one to Ethiopia last year, has found another prize: an illustrated copy of the four Christian Gospels that belonged to Queen Zewditu, who ruled Ethiopia from 1916 to 1930.

Working through the manuscript, Delamarter was surprised to find an extensive colophon, or notation, that the book was created for the queen, who was the daughter of King Menilek II and was succeeded by her cousin and co-regent who became known as Haile Selassie. The colophon suggests the book was made during the 11th year of her reign.

Two seals, made with ink-covered stamps, were stamped at the bottom of a right-hand page. Kesis Melaku Terefe, a priest in the Ethiopian Orthodox Church, translated the words of each seal. The smaller one on the left is the seal of a government official, the Minister of the Pen, and includes the admonition, "Let the Hearer Hear." The one on the right reads "Conquering Lion of the Tribe of Judah, Queen of Queens of Ethiopia, Zewditu, daughter of Menilek."

The text is handwritten in Ge'ez, the ancient liturgical language of the Ethiopian Orthodox Church. A colorful illustration accompanies each Gospel. Matthew, Mark, Luke and John are rendered in rich shades of orange, green and blue.

The manuscript is owned by Gerald Weiner, a collector who lives in Chicago who has decided to return the book to Ethiopia. Delamarter will take it with him this fall when he makes his 12th trip to Ethiopia.

Delamarter is founder and director of the Ethiopian Manuscript Imaging Project, which has digitized the contents of hundreds of rare books from collections outside of Ethiopia and created copies for Ethiopian libraries.