Earthquake in Mexico: Archimandrite Nektarios and the Mission survive, but the Monastery continues to struggle 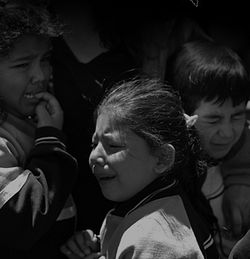 “Thanks to God nothing very serious happened,” wrote the abbot to the Fund for Assistance in an email.

“All our religious items fell to the ground, icons, bookshelves, lampadas, candelabra, furniture, kitchenware etc. Lots of broken glass and loose bricks everywhere; the major damage was in the cupola. Phone lines, Internet and electricity were interrupted for many hours. But all our parishioners are fine, just very scared. We have already had 15 aftershocks. “

Holy Trinity Skete was established in 2007 and swiftly became the spiritual heart of the Russian Diaspora, which serves the needs of local Russians, Serbs, Bulgarians, Moldavians and Mexicans. The monastery is very active in the local community: it provides medical and psychological aid in Russian to alcoholics and drug addicts, domestic violence victims; provides legal assistance to Russian women in case of a divorce from their Mexican husbands and questions of child custody; assists the needy and the unemployed. They teach the fundamentals of the Orthodox faith to their parishioners; accept pilgrims from all over the country.

The monastery has always experienced great financial hardship, but has never recovered from the loss of their bakery after the outbreak of swine-flu in 2009 forced it to close down for several weeks.

For the past several years the monastery has survived on the abbot’s salary as a professor t a local university, and the three brethren’s constant toil as they engage in different projects to benefit the skete and the community. Their current project is centered around an apiary and the hope of selling honey and making their own candles. They are now trying to scrape enough money to pay off the skete’s mounting debts as well as buy a candle-making machine. The difficult situation is exacerbated by Fr Nektariy’s constant health problems and the inability to pay for health insurance.

In this difficult moment for the monastery, we ask you to please help them survive and continue to spread Orthodoxy in Mexico. Ninety eight percent of parishioners are Russian women married to Mexicans, who thanks to Fr. Nektariy’s missionary work, are converting and bringing their families to church.