H. E. Michael McFaul was commented this meeting and conversation with Patriarch Kirill of Moscow and All Russia 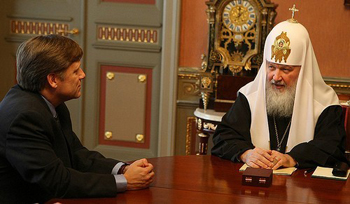 On 30 March 2012, His Holiness Patriarch Kirill of Moscow and All Russia  met with H. E. Michael McFaul, the recently appointed Ambassador Extraordinary and Plenipotentiary of the USA to the Russian Federation.

Michael McFaul  commented this meeting and conversation with Patriarch in his own blog:

Today, I had the honor to meet with His Holiness, Patriarch Kirill I, at his picturesque residence on Chisty pereulok. The building has a rich history that includes residents ranging from German diplomats to Russian nobility.

Patriarch Kirill was a gracious host, a fascinating interlocutor, who displayed a passion for the rich traditions of Russia and the Russian Orthodox Church. He also showed a penchant for history, recounting some of the historical ties between Russia and the United States. I was fascinated to learn that in 1794, the Russian Orthodox Church established its first parish in North America, at Kodiak Island in southeastern Alaska. No less interesting was his account of how he stood in line for hours in the 1960s to visit an American exhibition.

During our time together, I was reminded that as our relationship with Russia moves forward, we must continue to engage everyone, government and society. One of the areas of civil society in which I wish to see stronger relations between Russian and American counterparts is interfaith relations.