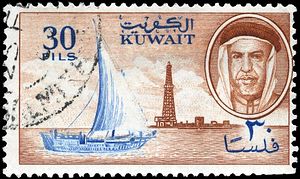 Kuwaiti postage stamp.
Kuwait's parliament recently passed a bill authorizing the death penalty for Muslims who curse God, the Qu'ran and its prophets, including the wives of the Prophet Mohammed.

Non-Muslims face a jail term of not less than 10 years; defendants who repent will be spared capital punishment in lieu of five years imprisonment and a fine of $36,000.

"We do not want to execute people with opinions … because Islam respects these people," said MP Ali al-Deqbasi, "but we need this legislation because incidents of cursing God have increased. We need to deter them."

Forty MPs voted for the bill against six opponents; Sh'ia MP Abdulhameed Dashti said the bill violated the Kuwaiti constitution and the tenants of Islam.

"Why are we trying to show Islam as a religion of death and blood when it is actually the opposite of that," he said.

The vote for the death penalty came after authorities arrested Sh'ia Hamad al-Naqia for allegedly cursing the Prophet Mohammed, his wife and his companions in a "tweet" last March; sectarian tensions have recently arisen in Kuwait between its Sunni majority and minority Sh'ia.