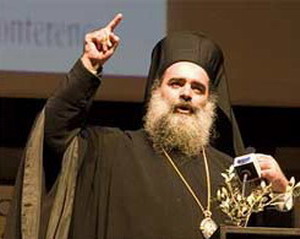 Archbishop Attalla Hanna of the Greek Orthodox Church In Jerusalem, voiced strong condemnation to the Israeli attempts to recruit Arab Christians in the 1948 territory (Israel) into the Israeli military that occupies their people and their lands.

Father Hanna strongly denounced some elements that held meetings with Israeli officials in an attempt to encourage young Arab Christians to join the Israeli occupation army, and said that those persons do not represent the Palestinian Christians.

Hanna added that Christians in the holy land are Arabs, Palestinians, and will not be part of the military that occupies and oppresses their people.

He also said that Israel is conducting a conspiracy that aims at uprooting the Arab Christians population from their national identity, adding that the Christians in the holy land are an essential part of the Arab nation.

The statements of Archbishop Hanna came after Israeli Defense Ministry officials held a meeting in Nazareth Illit City with a number of Christian priests urging them to encourage the Arab Christians to join the Israeli military.

In related news, the Islamic Movement in the 1948 territories warned young Arab men ”from falling into the Israeli trap that aims at creating sectarian conflicts within the Palestinian nation in occupied Palestine”.

The Islamic Movement urged all Arab political parties in the countries to play an essential role in countering the repeated Israeli attempt to recruits Arab youths in the Israeli army.