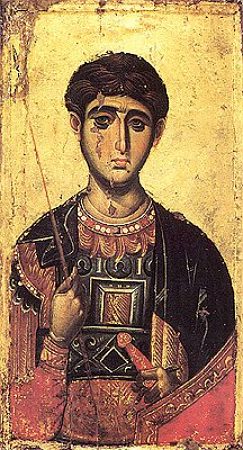 The feast day of Saint Demetrios is a great feast for all of Orthodoxy, but especially Thessalonica, which is his birthplace. His church is a building dating from the ancient Christian era, built one hundred years after his holy martyrdom which was in 296 A.D. But after 300 years it burned down, and was rebuilt in the days of Leo the Wise.

Saint Demetrios along with Saint George are the two brave young men of Christianity. These two are below on earth, and the two Archangels Michael and Gabriel are above in heaven.

In ancient times they were painted without armor, but in later years they were depicted armored with swords and spears and dressed in metal breastplates. On one shoulder they have their helmet hanging, and on the other their shield. At the waist they are girded with the straps which hold the sheath of the sword and the quiver which has in it the arrows and the bow. In recent years, after the conquest of Constantinople, these two saints, and many times other soldier saint as well, are painted as riding horses--Saint George on a white horse, Saint Demetrios on a red one. 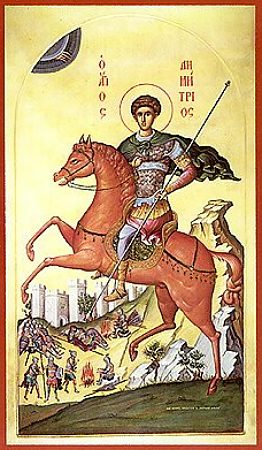 This armor which these Saints wear depicts spiritual weapons, like those of which the holy Apostle Paul speaks: "Put on the armor of God, that you may be able to stand agains the wiles of the devil. For our wrestling is not against flesh and blood, but against the principalities and the powers, against the world rulers of this darkness, agains the spiritual forces of wickedness on high. Therefore tak up the armor of God that you may be able to resist in the evil day, and stand in all things perfect. Stand, therefore, having girded your loins with truth, and having put on the breastplate of justice and having your feet shod with the readiness of the Gospel of peace, in all things taking up the shied of faith, with which you may be able to quench all the fiery darts of the most wicked one. And take unto you the helmet of salvation and the sword of the spirit, that is, the word of God" (Eph.6:11-17). This heroic and perservering character, which the warriors have who were martyred for Christ like harmless and innocent sheep, refers to spiritual things.

Saint Demetrios, the Great Martyr and Myhrr-Gusher, was born in Thessalonica in 260 A.D. His parents were illustrious people and along with the transitory glory which Demetrios had from his family, he was adorned with imperishable virtues: with prudence, sweetness, humility, justice, and with every noble comeliness of the soul. All these were like precious stones which shone on the crown which he wore, and this crown was his faith in Christ.

In those days, Diocletian reigned in Rome, and he had appointed as caesar in the parts of Macedonia and the East a hard-hearted and bloodthirsty general who was called Maximian--a beast in human form as were all those military rulers who then ruled the world with the sword: Diocletian, Maxentius, Maximian, Galerius, and Licinius. They were hard headed, fierce-faced, strong-jawed, grim-mouthed, with short thick necks like barrels, ruthless, and terrifying. He in turn appointed Demetrios ruler of Thessalonica and all Thesalia. When Maximian returned from a certain war, he gathered the officers of Thessalonica in order to offer sacrifice to the idols. Then Demetrios revealed that he was a Christian, and did not accept hewn stones as gods.

Maximian flew into a rage and ordered that he be tried and imprisoned in a bath. And all the while he was imprisoned, the populace ran with mourning to hear Demetrios teach the people of Christ. A young lad, Nestor, also went every day and heard his teaching.

During those days, many brave men fought in the stadium and Maximian rejoiced at these spectacles. He even had a certain henchman Lyaeus, a beastly man, brass-knuckled, an idolator and blasphemer, brought from some barbarous nation. Nestor, seeing that this Lyaeus had defeated all and boasted that he had the strength of Ares, the pagan god of war, and that no native dared wrestle with him, went to the prison and besought Saint Demetrios to bless him to defeat and put to shame Lyaeus, Maximian, and their religion.

Saint Demetrios prayed and made the sign of the Cross over him; immediately Nestor ran to the stadium and wrestled with that fierce giant, and he threw him down and slew him. Then Maximian became beside himself with rage. Learning that Nestor was a Christian and that Saint Demetrios had blessed him, he ordered the soldiers to have them put to death. 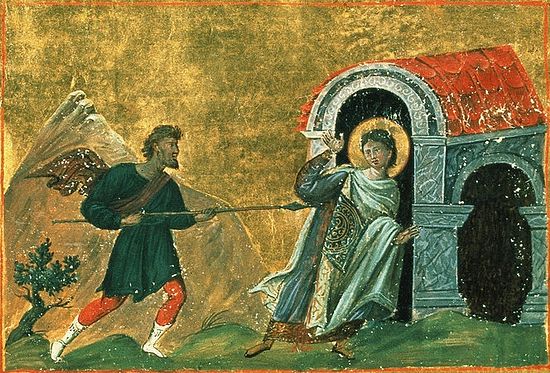 They went to the bath and pierced Saint Demetrios with their spears, and thus he received the eternal crown on the 26th of October, 296 A.D., at the age of thirty-six. It is written that when he saw the soldeirs thrusting their spears at him, he raised high his arm so that they could pierce his side, that might be deemed worthy to receive the same wound as did Christ in His side, and there ran blood and water from the wound. Nestor was beheaded the next day (holy Martyr Nestor of Thessalonica is commemorated in the holy Orthodox Church on October 27/November 8) outside the wall at the Golden Gate. He was killed with his own sword.

The Christians took the holy remains and buried them side by side, and from the grave of Saint Demetrios there came forth holy myrrh, which cured many diseases. For this reason he is called Myrovletes. Over his holy grave and the place of his holy martyrdom there was built a church in the form of a basilica which stands to this day. In 1143 the Emperor Manuel Comnenos sent from Constantinople for the holy icon of the Saint preserved at his tomb, and placed it in the Monastery of Pantocrator, the church of which was build by the Comneni. Today it is called today Zeirek.

Saint Demetrios longed above all for the Kingdom of Heaven, of which he was made worthy. Through his prayers, may we also be vouchsafed this kingdom. 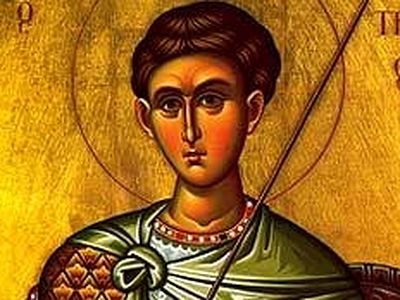 Saint Demetrios the Myrrh-Streamer: A True Martyr A martyr is not one who chooses to die; rather, it is when one involuntarily - but without hesitation - suffers torment at the hands of others because of a public declaration or confession of faith, that they genuinely receive the crown of martyrdom. 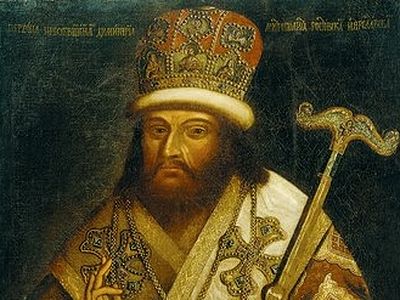 Holy Hierarch St. Dimitry of Rostov Commemorated 28 October/10 November Soon Dimitry was called to perform a different labor. There was a need to assemble a collection of the Lives of the Saints. Metropolitan Makary had long since begun the task of collecting the Lives of Saints from various sources and assembling them in his great volumes of the Menaion. 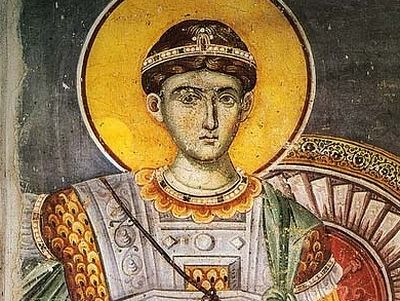 The Holy Great Martyr Demetrios of Thessaloniki St. Nicholai Velimirovich Knowing what was awaiting him, Demetrius gave all his goods to his faithful servant Lupus to distribute to the poor, and joyfully awaited his imminent suffering for Christ the Lord.An angel of God appeared to him in prison, saying: "Peace be to you, O sufferer of Christ; be brave and be strong!"
Комментарии
Войдите через FaceBook ВКонтакте Яндекс Mail.Ru Google или введите свои данные: