Fr. Mihai Negrea, protector of orphans, departs to the Lord 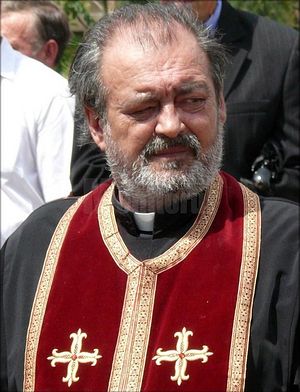 Photo: www.monitorulsv.ro
“What a painful beginning to 2017! Mourning weighs heavily upon me and the whole village of Podu Coşnei… Unfortunately, Fr. Mihai Negrea, the abbot of Podu Coşnei Monastery in the village of Poiana Stampei, left us last night... It’s a great loss for our village… May God grant your soul to rest in peace, dear friend!” wrote Viluț Mezdrea, mayor of Poiana Stampei, Romania on social media early on January 25.

Fr. Mihai reposed in the Lord on January 25, reports Monitorul. He is known as a man who devoted himself entirely to others, and especially to orphans, the sick, and the poor. The many children he leaves behind will remember him fondly and continue to trust in his prayers.

This father to so many was ordained as a priest in 1974 and went on to build churches, parish houses, historical monuments and philanthropic and rehabilitation institutions wherever he went. He was serving as chaplain to a unit of mountain troops before moving to the Sts. Peter and Paul Monastery in Podu Coşnei Monastery on April 2, 2006. He immediately set to work, taking care of four children whom he “adopted” as the first of the monastery’s future children’s home.

Fr. Mihai quickly set up a center for abandoned children, orphans, and the poor and sick, which eventually grew to take care of nearly one hundred children, and a social center which offered free meals, school supplies, and help with homework. He went door to door and asked everyone he knew to help as the monastery built its children’s home with nine spacious rooms, bathrooms, a kitchen, a dining room, a study, a library, a small medical office and various workshops and a chapel dedicated to the Archangels Michael and Gabriel and St. George.

The children under Fr. Mihai’s care were taken to school every day with food and money in pocket, and trained in household chores at the monastery to participate in the habitation’s daily life. Further facilities were eventually built to take care of more needy families and children.

“My great regret,” he once said, “is that some children live in train stations and in parks, going hungry or freezing in their homes.”

In 2014, Fr. Mihai received the title of honorary citizen of Poiana Stampei in gratitude for his life of dedication to the less fortunate.

May his memory be eternal!

Foma28 января 2017, 11:00
Very inspiring life! Memory Eternal Fr. Mihai! Could Provoslaviye.ru clarify where this all took place? Is it in Romania? Not all Orthodox reading the site know where Podu Conei and other locations in the article are. Thanks!