Cultivating Humility: Homily for the Sunday of the Pharisee and the Publican in the Orthodox Church 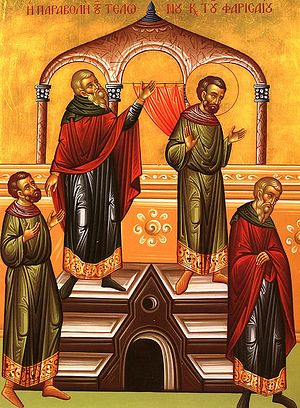 There are some problems that have to be identified clearly and addressed plainly because they are so important, so foundational to our life in Christ. They are some temptations so subtle, persistent, and dangerous that we must always be on full alert against them because they have the power to destroy our souls. Today we call ourselves to that kind of vigilance against pride, which often leads us to wander far from the path of the Kingdom without even knowing it.

In the parable of the Pharisee and the Publican, we encounter a man whom we would probably admire based on how he lived his life. He was just in his dealings with others, did not commit adultery, fasted, and gave alms. He appeared to be the model of righteousness. But he had one fatal flaw that destroyed him spiritually. That, of course, was pride as shown in his self-righteous judgment of other people, especially the publican or tax collector who was also in the Temple that day.

Like Zacchaeus, this tax collector was a traitor to his own people by collecting taxes from his fellow Jews to pay for the Roman army of occupation. He made his living by collecting more than was required and then living off the difference. He was crooked and a collaborator with his nation’s enemies. There was nothing admirable about the outward appearance of his life. Who would not be tempted to look down upon such a person? But this fellow had one tremendous virtue that healed him spiritually. That, of course, was his humility as shown when he would not even lift his eyes up to heaven, but simply prayed from his heart as he beat his breast, saying “God, be merciful to me a sinner.” The Lord explained the key difference between these two men in this way: “I tell you, this man went down to his house justified rather than the other; for everyone who exalts himself will be humbled, but he who humbles himself will be exalted.” The Pharisee sent Himself down by the weight of his own pride, while the miserable tax collector was raised up by the Lord due to his humility.

Today we begin the three-week period of preparation for Great Lent, which begins this year on February 27. Lent prepares us to follow our Lord to His cross and empty tomb. It is a penitential season that provides tremendous opportunities for the healing of our souls. But if we retain the spirit of the Pharisee, the disciplines of Lent will not bring us any closer to Christ; indeed, they will have the opposite effect. For it is possible to attend services and pray at home in a self-congratulatory way such that, like the Pharisee, we are really worshiping ourselves and not God. That is called idolatry. It is possible to corrupt prayer and church attendance as ways to build ourselves up and put others down when we fall into the self-righteous judgment of others. It is possible to destroy the spiritual benefit of fasting, giving to the poor, and every other spiritual discipline through pride. We will do ourselves more harm than good by approaching them in that way. Spiritual disciplines are not ways of showing God how good we are or making us feel better about ourselves; instead, they help to open the eyes of our souls to the truth that each of us is personally the chief of sinners and totally dependent upon our Lord’s mercy and grace.

This is an important lesson not only as we prepare for Lent, but for every day of our lives. We face temptations all the time to put ourselves in the place of the angels and to view others as demons. We may do that in relation to particular people who have harmed us or whom we do not particularly like, perhaps for good reason. It may have to do with people or groups we do not know personally, but who inspire hatred and fear in us for whatever reason. Without denying that harms have been done or that there are risks in the world as we know it, we must never allow our hearts and souls to be consumed by self-righteous judgment as though it were perfectly fine for us to celebrate how great we are in contrast to how rotten others are. If we have ever fantasized about how some deserve condemnation and we deserve an award for good behavior, we have become the Pharisee.

Thank God, then, that we have seasons of intensified spiritual struggle, such as Great Lent. For there is nothing like them to help us see the true state of our souls a bit more clearly. Periods of intensified prayer make us aware of how far we are from being fully present to God in the services of the Church or in our daily lives. Try to focus on prayer and you will likely be distracted by thoughts that seem almost impossible to control.   Something similar happens when we try to fast. The call to abstain from the richest and most satisfying foods often reveals a fixation on how we simply cannot live without meat, cheese, and other rich food. And even when we change what we eat to lighter fare, the temptation to stuff ourselves remains. The reminder to give generously to the poor makes us fear that we will become impoverished if we help, even in small ways, those who are truly in need.   We so easily justify extravagances for ourselves while others starve or lack basic necessities. In other words, the spiritual disciplines of Lent call us to humility precisely because they reveal our spiritual weakness and brokenness.   They show us our pride because we are obsessed with putting our desires before God’s will, and we can always find someone to look down upon in order to feel better about ourselves. When we struggle with these and other spiritual disciplines, they help us to gain just a bit of the spiritual clarity of that blessed tax collector who knew his own corruption so well that the prayer of his heart was simply “God, be merciful to me, a sinner.”

The hard truth is that we will never grow in Christ unless we intentionally take steps that help us grow in humility, that help us embrace the truth about where we stand before the Lord. To see that truth does not mean having ideas about ourselves or about God. Instead, it means gaining the spiritual health to become more fully the unique persons He created us to be in His image and likeness. Of course, we are called to holiness, but true holiness is incompatible with thinking that we are holy. True holiness means becoming like Christ, Whose humility knows no bounds, not even the Cross and the tomb. And since He calls us to become perfect as our Heavenly Father is perfect, we are always in need of His mercy and grace as we press on toward an infinite goal that we may never say that we have fully met or mastered.

The key difference between the two men in today’s gospel reading is that the Pharisee was so spiritually blind that he thought he actually had done all that God required. He even prayed to himself. He apparently thought that he needed no forgiveness and was justified in worshiping himself and condemning others. His was a very watered-down religion, ultimately a form of idolatry that was focused on the glories of his own life. The tax collector was the complete opposite, focused only on his own need for God’s mercy as the chief of sinners. As we begin to make our plans for intensified prayer, spiritual reading, fasting, almsgiving, forgiveness, and repentance this Lent, we should focus on turning away from every form of self-justification and every form of condemnation of others. We should embrace the spirituality of the Jesus Prayer as much as possible: “Lord Jesus Christ, Son of God, have mercy on me, a sinner.” We should look for opportunities in our daily lives to put the needs of others before our own, to live for others and not simply for ourselves. And when we struggle and fail to accomplish what we set out to do, we should kneel in humility like the publican with no excuses, no passing of the blame, and no judgment of anyone else for any reason. We should learn to see ourselves as the chief of sinners with nothing to present to the Lord except a plea for mercy and a humble resolve turn away from our sins and to turn toward Him in how we live our lives each day.

Our inflamed passions will tempt us to give up quickly when prayer, fasting, almsgiving and other disciplines are difficult. If we make progress in any discipline, we will likely be tempted to focus on that and fall into pride. We should be prepared for strange thoughts and odd desires to attempt to distract us. We should be ready for a struggle, but it is precisely through the battle that we may acquire the humility that will open our souls to the healing power of the Lord Who lowered Himself to the cross, the tomb, and Hades in order to rise in glory and conquer all forms of corruption. And if we want to share in the glory of His resurrection, then we must also lower ourselves by crucifying our passions, by dying to sin, and doing all that we can to destroy the corruptions of pride in our souls. In other words, we must kill the Pharisee within us even as we cultivate the spiritual clarity of the tax collector if we want to follow Christ to His crucifixion and behold the brilliant light of the empty tomb. The only way to do that is by being in the place of that humble publican who knew that he was the chief of sinners. May we all follow his blessed example during our Lenten journey this year. 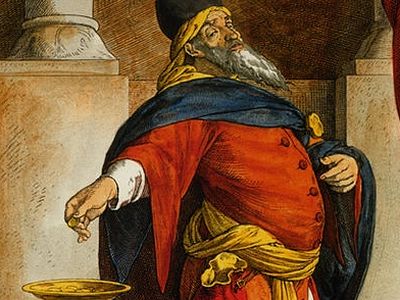 The Parable of the Publican and the Pharisee
Archpriest Victor Potapov

The Parable of the Publican and the Pharisee
Archpriest Victor Potapov
These, then, are the two different states - on the one hand, there is the prayer beginning with thanksgiving: God, I thank thee that I am not as other men are. This is seemingly an invocation of God, but in actual fact it is a confirmation of his "ego", for the core of pride, according to Venerable John Climacus, is "the shameless parade of our labours". 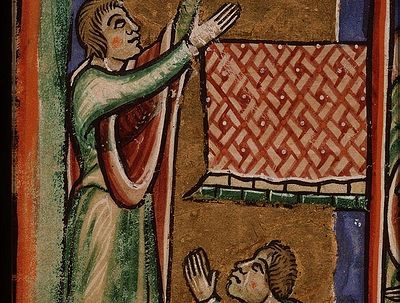 Seeking Vision of God
A Homily on the Sunday of the Publican and Pharisee
Joseph Magnus Frangipani
Too often, we mostly identify with the airport on top of our head. This airport welcomes compulsive thoughts taking off, landing, circling around us. We're constantly debating with ourselves, assessing everything. Whether good or bad, the fact our will is independent says we're not in harmony with God. Most of us don't hear God speaking in our midst because we're tuned in to this airport. 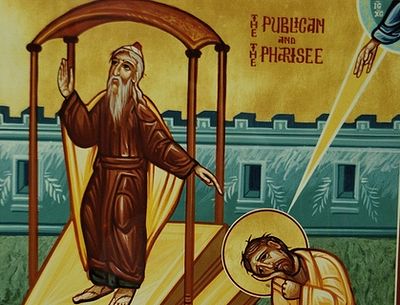 Sunday of the Publican and the Pharisee
Fr. Milan Katanic

Sunday of the Publican and the Pharisee
Fr. Milan Katanic
We need to be sober-minded and always aware of our sins. As our holy St. Bishop Nikolai points out, God is more pleased when man numbers his sins and not his good deeds, because He is our Physician and comes to our bed and asks us our pains. Foolish is the man who conceals his pain speaks to the Physician of his good health and wise is the one who tells him of all his pains.
Комментарии