Icon of the Mother of God “Elets-Chernigov” 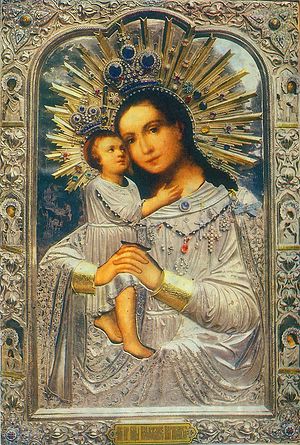 The Elets-Chernigov (Chernigov Spruce Tree) Icon of the Mother of God appeared on a spruce or fir tree near Chernigov in the year 1060, in the time of Prince Svyatoslav Yaroslavich, as was recorded in the Synodikon of Bishop Zosimus Prokopovich of Chernigov (1655-1657). The icon was placed in a church built in honor of the Elets-Spruce Icon of the Mother of God. Saint Anthony (July 10), while living an ascetical life on the Boldino Heights (1068-1069), had given his blessing to found a monastery at this place.

The ultimate fate of the icon is unclear. According to one tradition, a descendant of the Chernigov princes, Baryatinsky, carried the icon to Moscow in the year 1579, when Chernigov fell into the hands of the Polish King Stephen Bathory. In 1687, Prince Daniel Baryatinsky was returning from a campaign in the Crimea. At Kharkov he fell seriously ill, and before his death he bequeathed the Elets Icon to the nearby Kharkov Dormition church.

According to another tradition, the icon vanished from the monastery when it was sacked in the seventeenth century by the forces of Sigismund III. In 1676, Prince Constantine Ostrozhsky presented the Elets monastery a copy of the Elets Icon of the Mother of God, brought from Vladimir by the Kozel brothers. Archimandrite Joannicius (Golyatovsky) was at this time restoring the monastery and he described numerous miracles of this icon in his book, “Skorbnitsa” (or “Sokrovischnitsa”, i.e. “Consoler” or “Treasury”), published in 1676 in Novgorod.