Monkmartyr Conon and his son of Iconium 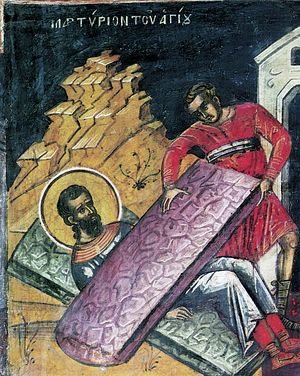 Photo: Days.Pravoslavie.Ru
The Holy Hieromartyr Conon lived in Iconium (Asia Minor). After he became a widower, he went to a monastery with his son. Because of his devout life the saint was granted help from above. He cast out devils, he healed the sick, gave sight to the blind, and preached Christ among the pagans, converting many.

Reports of him reached the governor Dometian, a persecutor of Christians. Saint Conon was brought to trial and they ordered him to offer sacrifice to idols, but since he would not, he was handed over for torture. The seventeen-year-old son of the martyr, Deacon Conon, was also brought to trial.

After persuasion failed to make him renounce the True Faith, both father and son were subjected to cruel tortures. They were stripped and laid on a red-hot cot, they were drenched with hot oil, they were thrown into a cauldron with boiling tin, sulfur and tar, they were suspended upside down and scorched with a choking smoke. Preserved by God, the martyrs remained unharmed.

The irate torturers then resorted to a horrible way to destroy the preachers: sawing them in two with a wooden saw. Learning of this sentence, the saints asked time to pray and they cried out to the Lord, “We give thanks to You, O Lord, for permitting us to suffer for Your Name! We beseech You to grant peace to Your Church, put its persecutors to shame, strengthen and increase those who believe in You, grant us to come to You, and give peace unto our souls.”

The Voice of God was heard from above, calling the holy sufferers. Having signed themselves with the Sign of the Cross, the holy martyrs gave up their souls to the Lord. At once, there was an earthquake, and all the pagan temples in the city collapsed.

Monks secretly buried the bodies of the martyrs at the monastery where the saints had labored in asceticism during life. This occurred during the reign of Aurelian in the years 270-275. The relics of the holy martyrs were later transferred to Italy, to the city of Acerno (Campania).