This article is dedicated to two Welsh saints whose veneration has continued for many centuries and whose feast days are very close to each other. They are Sts. Brynach and Derfel Gadarn. 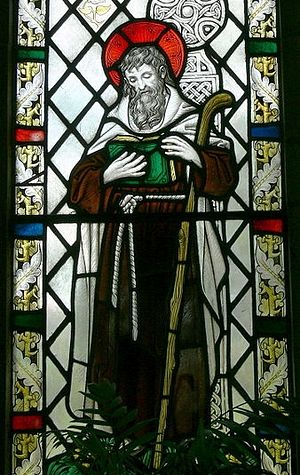 A stained glass image of St. Brynach (source - Wolfgang Sauber)
Venerable Brynach most probably lived in the fifth to sixth centuries. Little information about him survives, as the only surviving hagiography was composed in the twelfth century. According to one popular version, he hailed from Ireland and in his youth led an impious life, but later mended his ways, repented and devoted his energies to the service of God, prayer and the foundation of churches. One tradition says that once, the future saint, returning from a trip to Brittany back to his native Ireland, was shipwrecked in the south of Wales and thrown onto the Welsh shore. The man of God understood that it was a sign from above, as the Lord wanted Brynach to serve Him in Wales.

The saint did indeed travel to many regions of Wales, and, according to one late legend, even visited Rome. Like other Irish saints, Brynach became a wandering missionary and labored mainly in the west of Wales. The saint combined preaching and building churches with the ascetic life for which his soul particularly strove. It is known that St. Brynach built a cell and a church at the foot of a hill called Mynydd Carningli (meaning “The Mount of Angels” in Old Welsh) in Pembrokeshire, which is 347 meters (1138 feet) high. He may have founded a monastery there too. Whenever life in the monastery became too hectic, the saint would climb the hill and spend a long time at the top in fasting, prayer, contemplation, serenity and communion with the angels. According to his Life, the saint literally communicated with angels when he retreated to the summit, and he was eventually able to communicate with the angelic powers permanently. 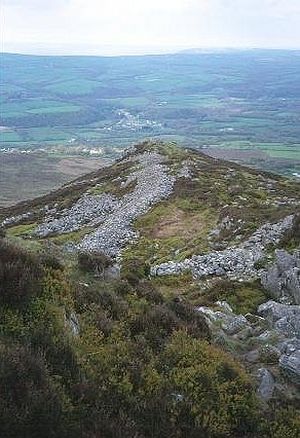 Mynydd Carningli (source - Geograph.org.uk)
With time the ascetic built a small monastery close to Mynydd Carningli in the present-day village of Nevern in Pembrokeshire. As was the case with several other Welsh saints, a white sow appeared to him in a vision and pointed to the place where Brynach was to build his church. Wild animals, especially deer, served him; thus, a “team” of deer helped him bring tree trunks from the forest to build the monastery church. It was said that Nevern, where Brynach gathered many disciples, later had a school. Today this village has a Norman church dedicated to St. Brynach. Brynach was an illustrious preacher and inspired people so much that a local king in Wales named Clether abdicated the throne in his old age, moved from Wales to Cornwall, himself became a missionary there and after his death was venerated as a saint.

Among other traditions connected with St Brynach let us mention the following. There was a famous “red well,” the water of which acquired healing power through the prayers of Brynach. St. Brynach used to pray in cold water for a long time, as did many other Celtic saints. The saint despised any possessions and lived in such poverty that there was nothing in his cell except a rock which served him as a pillow. Once Brynach travelled to the deserted village of Pontfaen, which was inhabited by evil spirits who terrified the local population and made them flee. Through his prayers and the sign of the cross the saint drove all the demons away from the locality and people returned to live there. According to tradition, St. Brynach was a friend to St. David, the patron of Wales.

The holy man founded a number of other churches and chapels along rivers in Wales. Most of his establishments can be found in Pembrokeshire. Today some churches in the counties of Pembrokeshire, Carmarthenshire, Glamorgan, Monmouthshire and the former county of Brecknockshire are dedicated to him. A parish church in the village of Dinas Cross in Pembrokeshire is dedicated to Brynach. The chancel of the original old church, dating to the time of the saint, was washed away by the waves in 1850, and the roof and the north wall were destroyed nine years later. In the early 1860s, a small new church in honor of this saint was built in Dinas Cross further from the seashore (the original church had stood on the beach on the south-eastern corner of Dinas Island Peninsula). Some ruins of the old church survive and are now located in a park; their exact location is the hamlet of Cwm-yr-Eglwys (“Valley of the Church”) near Dinas Cross. 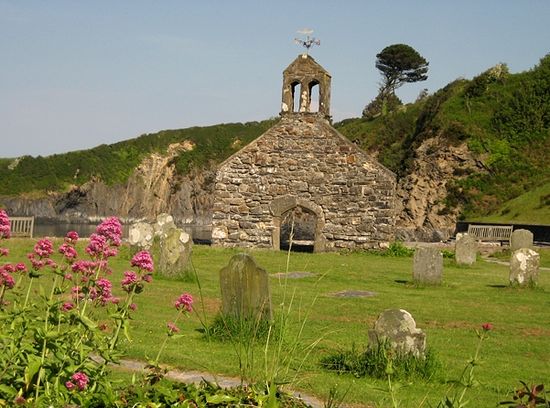 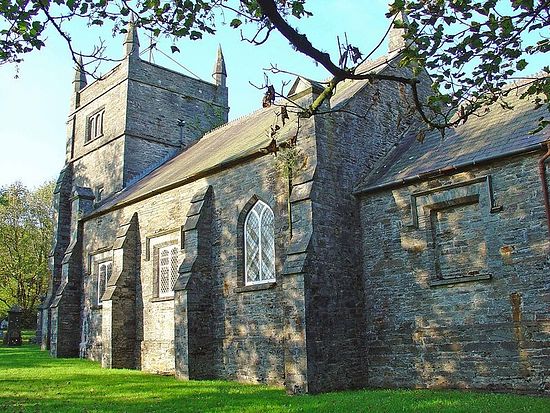 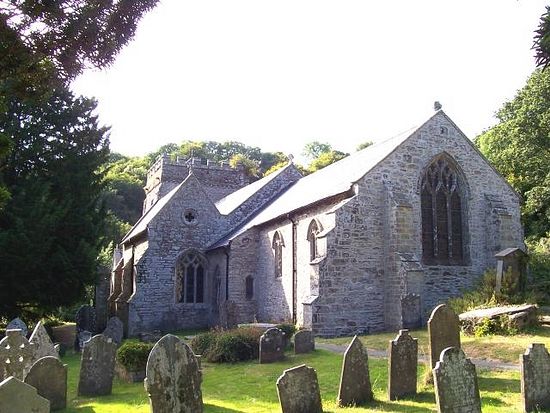 
The most important church dedicated to the saint is in Nevern in Pembrokeshire, mentioned above, which was his principal center. The church sits by the river at the foot of a hill. The tower is its oldest feature and can be traced back to Norman times. The rest of the church is of the fifteenth and sixteenth centuries. There is a collection of stained glass and carved stones inside. These include the smart “Braided Cross Stone” in the south transept chapel, which has a rare relief knotwork cross, and the “Maglocunus stone”—both are over 1000 years old. The church commemorates the Welsh geologist, antiquarian and author George Owen (1552-1613) who was buried here. 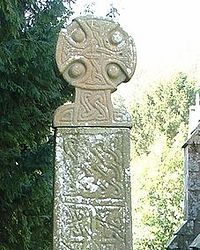 The Celtic cross at Nevern (tenth cent.)
This holy place is very unusual. Firstly, it has preserved a Celtic cross of the tenth century outside the church, which stands intact to this day. It is called “the Great Cross”; it is about four meters high and sixty centimeters (two feet) in diameter. According to experts, it is one of the finest surviving examples of a Celtic monument in Wales. Secondly, there is a fifth century monument just outside the church, called the “Vitalianus stone”, which retains early inscriptions in Latin and Ogham—an ancient British and Irish alphabet, consisting of twenty characters formed by parallel strokes on either side of or across a continuous line. (There are more historic crosses nearby). 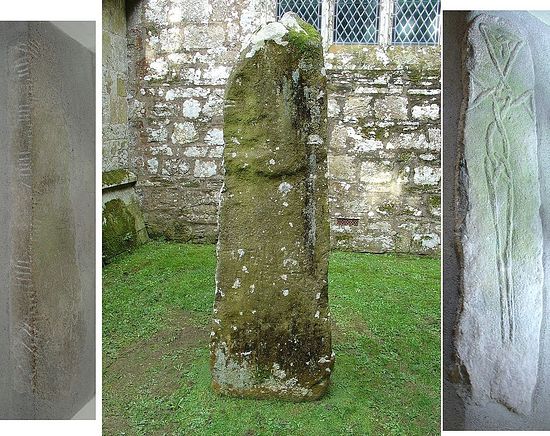 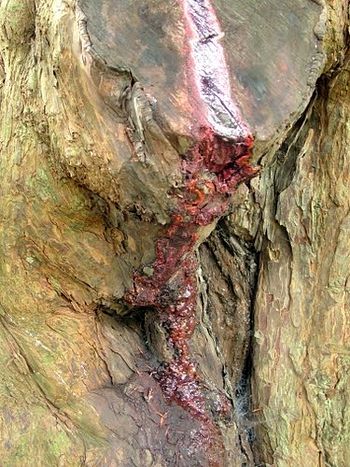 Thirdly, among the old yew trees growing near the church there is one very special one, called “the bleeding yew” because it emits a red sap of unknown origin at a certain time of the year that resembles blood. It stands near the gate. The nature of this sap has not yet been identified by scientists who have tried to examine it more than once. This flow has dripped from a “wound” in this 700-year-old tree (all of the local yew trees are at least 600 years old) for decades. Drops suddenly start trickling from the yew to the ground regularly, amazing and puzzling sceptics to this day. The sap has neither smell nor stain, and, since most kinds of yews are poisonous, nobody has yet tasted it. There are numerous legends around this mystery. One explanation is that this yew “bleeds” in sympathy with Christ Who was crucified on the Cross; another explanation is that it symbolizes the Tree of Life in Eden; another that it will “bleed” until there is peace in the world; another is that an innocent monk was hanged on this tree for a crime that he never committed. Some associate this phenomenon with paganism, since this site was used by pagans before the coming of Christianity. Fourthly, there is an ancient pilgrims’ cross outside the village, carved into a cliff. This site lies on a medieval pilgrimage route to St. David’s, so that the numerous pilgrims passing by could stop and pray at the cross, which was originally a shrine with a niche, and had the figure of a saint in it. 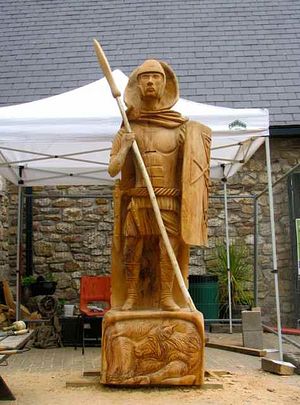 St. Derfel Gadarn's sculpture by David Lloyd (source - Behance.net)
The memory of St. Derfel Gadarn (fifth to sixth centuries?) lives on in Wales to this day. The name means “Derfel the Strong”. He was originally a prominent soldier, but then abandoned his military career and gave himself over to spiritual labors for the glory of God. He was a hermit at Llandderfel (“Church of Derfel”) in the kingdom (and now county) of Gwynedd in Wales where he established a church or monastic community. He may also have been the abbot of two famous monasteries: those of Llantwit Major (Llanilltud Fawr in Welsh), founded by St. Illtyd, where he had probably studied, and that on the island of Bardsey (founded by his cousin St. Cadfan).

St. Derfel reposed in the Lord a very old man, much venerated as a saint. In the Middle Ages Derfel was celebrated in poetry, especially as a soldier. Pilgrimages to his shrine and relics in the church of Llantarnam (the present-day county borough of Torfaen) in the south-east of Wales continued for many centuries.

The church at Llandderfel had a splendid, life-size, wooden statue of the saint dressed as a warrior on a horse (according to another interpretation, on a deer, as the saint had a pet deer), which through the centuries was much venerated as a relic and visited by numerous pilgrims. According to medieval stories, not long before the Reformation pilgrims would come to the saint’s statue every day and even bring their domestic livestock with them. In thanks for the miracles that St. Derfel performed, the faithful brought generous donations to this church. It was believed that the saint would intercede for the soul of every single believer after his death if in their lifetime they had come to his church at least once with sincere faith and a donation. On St. Derfel’s feast day—April 5 according to the old calendar—no fewer than 500-600 faithful would come to Llandderfel church. 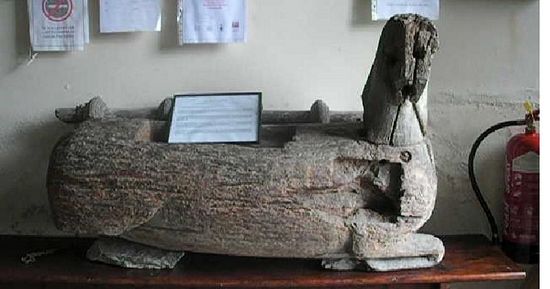 This wooden statue of St. Derfel Gadarn was burned in 1538 in Smithfield, London, during the Reformation, by the Chief Minister of Henry VIII, Thomas Cromwell, in spite of protests. This statue was used for the fire on which the Catholic saint and Franciscan friar John Forest1 (1471-1538) was executed by burning at the stake. Thus a prophecy was fulfilled, according to which this wooden effigy of St. Derfel would set a whole forest afire.

The parish church in the village of Llandderfel in Gwynedd is dedicated to St. Derfel Gadarn to this day. It was certainly mentioned in 1291, and the present structure is of the early Tudor period. The church boasts a fine and rare oak rood screen dating back to about 1500. This ancient church still houses the surviving part of the wooden shrine: namely the wooden staff and the life-size horse (or deer) of the saint. Some believe that even this segment of the statue possesses miraculous powers. It is a very moving surviving monument in Wales. Even after the barbarous and bloody Reformation, people continued to venerate Derfel Gadarn, and they would take his horse out to a local field on Easter Week and let their children play with it (this somewhat odd tradition stopped and at present the effigy is kept only in the church). The Welsh poet Dewi Havhesp (1831-1884), author of Oriau'r Awen (“The Hours of the Muse”), is buried in the churchyard.

A holy well in honor of this saint partially survives near the village. It is hidden half-way up a steep hill under a line of trees by a small wall. Though both shrines survive only in part, they remain memorials to the saint who from a secular warrior turned into a warrior of Christ. A life-size sculpture of St. Derfel was recently created by the Welsh sculptor and artist David Lloyd. The sculpture was unveiled at the Thornhill Communities first annual St. Derfel’s Day celebrations in April 2011, according to the Ancient Cwmbran Society’s website.

Holy Fathers Brynach and Derfel Gadarn, pray to God for us!

1 John Forest was the confessor of King Henry VIII’s first wife Catherine of Aragon. He was condemned to death after refusing to accept Henry VIII as the supreme head of the Church of England.