Rejoice greatly, O daughter of Sion; proclaim it aloud, O daughter of Jerusalem; behold, the King is coming to thee, just, and a Savior; he is meek and riding on an ass, and a young foal (Zach. 9:9). 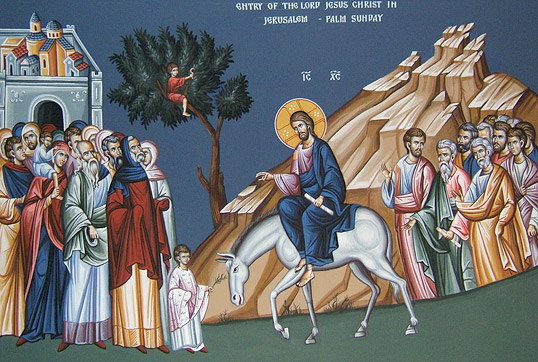 Entry of The Lord Jesus Christ in Jerusalem
The prophet of God pronounced this prophecy over four hundred years before the event that we commemorate and celebrate today. Having completed His preaching on the earth, our Lord Jesus Christ made His triumphant entry into the royal city of Jerusalem, into the city where the true God was worshipped, a city in most ways Godly. The Lord made this entry as the King and victor, in order to finish His service by a decisive exploit: destroying death by death; removing the curse from the human race by taking this curse upon Himself. He made His entry into the royal city on the colt of an ass, whereon yet never man sat (Lk. 19:30), in order to restore to mankind the royal dignity which our forefather had wasted; to restore this dignity by ascending the cross. The unbroken colt was tamed beneath the wondrous Rider. The Apostles placed their garments upon the colt; great multitudes of people ran ahead to meet the Lord and walk alongside Him, shouting in their ecstasy, Hosanna to the son of David: Blessed is he [the king (Lk. 19:38)] that cometh in the name of the Lord; Hosanna in the highest (Mt. 21:9). The Lord is proclaimed King in the name of the Lord at His own beckoning—not accidentally, and not by conscious human will. In the course of four days, those same people who that day proclaimed Him King will cry, Away with him, away with him, crucify him… We have no king but Caesar (Jn. 19:15).

What is the significance of the Lord’s riding into Jerusalem on an unbroken colt? According to the explanation of the holy fathers, this has a deep, prophetic meaning. The all-seeing Lord already saw the Jews’ approaching final apostasy from God. He announced this apostasy even back when the Law was given to the Israelites on Mt. Sinai, through the lips of the inspired Law-giver. They have sinned, said Moses of the Jews’ future sin against the God-man, as if he were speaking of something already done. They have sinned, not pleasing him; spotted children, a froward and perverse generation. Do ye thus recompense the Lord? (Deut. 32:5–6). It is a nation that has lost counsel, neither is there understanding in them. They had not sense to understand: let them reserve these things against the time to come (Deut. 32:28–29). For their vine is of the vine of Sodom, and their vine-branch of Gomorrha (Deut. 32:32). While to the contrary: Rejoice, ye heavens, with him—the Son of God—and let all the angels of God worship him; rejoice ye Gentiles, with his people, and let all the sons of God strengthen themselves in him (Deut 32:43). The entry into Jerusalem upon an unbroken colt is a repetition of Moses’ prophecy—not in words, but in symbol. Moses foretold that the Gentiles would rejoice in the Lord, but the Jews would be rejected. Here, the unbroken colt, whereon yet never man sat (Lk. 19:30), is an image of the Gentiles. The Apostles’ garments are Christ’s teachings by which they would instruct the Gentiles, and the Lord seated Himself spiritually upon the Gentiles, making them God. He led them into Jerusalem, to the bosom of the Church, to the eternal city of God not made by the hands of men, to the city of salvation and blessedness. The rejected Jews were also present there. With their lips they cried, “the King of Israel,” but in their soul, their Sanhedrin, they had already resolved to kill the Savior.

Here is another meaning of the colt of an ass. It is an image of every person who is led by irrational desires, deprived of spiritual freedom, attached to the passions and habits of fleshly life. Christ’s teaching looses the ass from its attachment; that is, from fulfilling its sinful and fleshly will. Then the Apostles lead the ass to Christ, place their garments upon it; the Lord seats Himself upon it and makes His entry upon it into Jerusalem. This means that the person who has left his sinful life is led to the Gospels, and is clothed as if in apostolic vestments, in the most detailed and refined knowledge of Christ and His commandments. Then the Lord seats Himself upon him by spiritually appearing to him and spiritually abiding in him, as it was His good will to promise: He that hath my commandments, and keepeth them, he it is that loveth me: and he that loveth me shall be loved of my Father, and I will love him, and will manifest myself to him (Jn. 14:21). And my Father will love him, and we will come unto him, and make our abode with him (Jn. 14:23). The Lord’s coming is accompanied by peace surpassing words and comprehension; peace that is full of grace, and worthy of the one Who grants it—the Lord. This peace is not to be compared with the natural rest of fallen man, who may feel rest and pleasure from fleshly delights, and who may consider his own insensibility, his own eternal death, to be rest. The Lord is seated upon the natural qualities of the person who has submitted to Him and has assimilated His all-holy teachings; and He leads that person into the spiritual city of God, the city of peace—into the Jerusalem created by God, and not by man.

The soul that upholds the Lord is greeted by the Holy Spirit, Who offers that soul spiritual joy which is incorruptible and eternal. Rejoice greatly, O daughter of Sion, the daughter of the Holy Church—because you belong to no one but God. Proclaim it aloud, O daughter of Jerusalem; behold, the King is coming to thee, just, and a Savior; he is meek and riding on an ass, and a young foal (Zach. 9:9). You have felt the grace-filled peace of Christ, and become a daughter of this peace; you have been renewed with spiritual youth and have come to know Christ’s Kingdom by experience. The passions are tamed in you by the grace-filled power of Rider Who steers you; your natural qualities cannot break their natural laws, they cannot go beyond their boundaries and be transformed into uncontrolled passions! Taking all your thoughts, feelings and actions from the Lord, you can and must proclaim the Name of the Lord to your brethren, and hymn Him in the midst of the Church (Ps. 21:22). As one born of the Holy Spirit and a daughter of the Spirit, you are able to behold the spiritual procession of your King, you are able to behold the righteousness of your King. He is meek and lowly in heart (Mt. 11:29), and He will guide the meek in judgment, He will teach the meek His ways (Ps. 24:9). Our God is a Spirit which is incomparable to any created spirit, as He is in all aspects infinitely different from all creatures. The holy created spirits are His thrones and chariots. He is seated and rides upon the Cherubim; He is seated and rides upon those blessed human souls who have submitted to Him and brought all their natural qualities to Him as a whole burnt offering. The King rides upon such souls, and enters the holy city of God, bringing holy souls into it also. Hosanna in the highest! Blessed is the King of Israel that cometh. Amen.