Instruction on the Sunday of the Prodigal Son. On Repentance

Beloved brethren! The Holy Church, the loving mother of all her children, who gave them birth unto salvation, and takes upon herself all care to ensure that her children not lose their inheritance—Heaven, preparing them for the successful completion of the forthcoming podvig of the Forty Days Fast, has ordained that we read today at the Divine Liturgy the parable of our Lord Jesus Christ about the prodigal son. 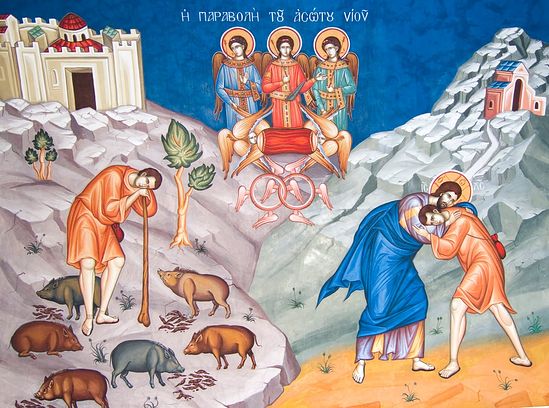 In what does the podvig of the holy Forty Days Fast consist? In the podvig of repentance. During these days, we stand before the time dedicated largely to repentance, as before the doors of repentance, and sing the song that is filled with contrite feeling: Open unto me the doors of repentance, O Giver of life! What does our Lord’s Gospel parable that we hear today reveal to us? It reveals the unfathomable, infinite mercy of our Heavenly Father for sinners who bring forth repentance. The Lord made it known to people, calling them to repentance: Likewise, I say unto you, there is joy in the presence of the angels of God over one sinner that repenteth (Lk. 15:10). So that His words would become even more strongly impressed in the hearts of His listeners, He decided to supplement them with a parable.

A certain man had two sons, says the Gospel parable. The younger of them asked his father to give him his share of the inheritance. The father did so. After not many days, the younger son took his inheritance and left for a far country, where he spent all his inheritance on a wanton life. When he had spent it all, there came a famine on that country. The son of the rich man not only found himself wanting, but was in a desperate state. In this serious plight, he asked assistance from one of the local inhabitants, who sent him to the field to herd his swine. Exhausted with hunger, the wretch would have been happy to fill his belly with the coarsest swine feed! But this turned out to be impossible. In such a state, he finally came to his senses, and remembering the abundance of his father’s house, resolved to return to his father. He prepared mentally what he would say to his father in order to gain his propitiation: he would admit his sin and his unworthiness, and humbly ask to be accepted, not into his father’s family, but as one of his host of slaves and hired servants. With this in his heart, the younger son set out on his way. He was still far from his father’s house when his father saw him. He saw him and had compassion on him; ran, fell on his neck, and kissed him. When his son pronounced the confession and request he had prepared, his father called the servants, saying, Bring forth the best robe, and put it on him; and put a ring on his hand, and shoes on his feet: And bring hither the fatted calf, and kill it; and let us eat, and be merry: For this my son was dead, and is alive again; he was lost, and is found! The older son who was always submissive to his father’s will was in the field, and he when returned to the house, the feast was on. He found his father’s behavior toward the younger son strange. But inspired by the righteousness of love, before which every other righteousness is pathetic and insignificant, the father remonstrated, Son, thou art ever with me, and all that I have is thine. It was meet that we should make merry, and be glad: for this thy brother was dead, and is alive again; and was lost, and is found (See Lk. 15:11-32).

According to the holy fathers,[1] the younger son could also be an image of all fallen mankind and of every sinner. The younger son’s inheritance is God’s gifts, with which every person is endowed, especially Christians. The most supreme gifts of God are the mind and heart, and especially the grace of the Holy Spirit given to every Christian. The son’s demand that the father give him his inheritance to use according his own will is man’s attempt to cast off his submission to God, and follow his own thoughts and desires. The father ceding the inheritance is a portrayal of the self-governance with which God honored man for the use of His gifts. The far country is a sinful life, distancing and alienating us from God. The squandering of the inheritance is the exhaustion of the powers of our mind, heart and body; in particular the outrage against the Holy Spirit and its expulsion from ourselves through our sinful deeds. The younger son’s poverty is the soul’s emptiness, which comes about from a sinful life. The permanent inhabitants of the far country are the princes of the darkness this age, the fallen spirits, permanently fallen and alienated from God. The sinner submits to their influence. The herd of unclean animals [swine] is the sinful thoughts and feelings that roam in soul of the sinners, grazing on its pastures. They are the inevitable consequence of sinful acts. In vain does a man think to silence these thoughts and feelings by fulfilling them—they are most impossible to satisfy! Man can carry out these passionate thoughts and dreams, but that does not destroy them—it only rouses them to redouble their strength. Man is created for heaven; only true goodness can be his satisfying, life-giving food. Evil, which attracts and seduces the heart’s taste damaged by the fall, is only capable of despoiling man’s nature.

How horrible is the emptiness of soul brought on by a sinful life! Unbearable is the torment from passionate, sinful thoughts and feelings, when they roil like worms in the soul, when they tear at the soul that has submitted to them, the soul that has been violated by them! Often a sinner who is tormented by fierce thoughts, dreams, and unfulfilled desires comes to despair. He often tries to take his own life, both temporal and eternal. Blessed is the sinner who comes to his senses during that terrible period and remembers the boundless love of the Heavenly Father, and the measureless spiritual riches overflowing in the house of the Heavenly Father—the holy Church. Blessed is that sinner who, horrified by his own sinfulness, wants to be free of its oppressive weight through repentance.

We learn from the Gospel parable that for successful and fruitful repentance, a man needs to provide on his part: seeing his own sin, recognizing it, repenting of it, and confession of it. God sees a person who has made this pledge in heart while he is yet a long way off; He sees him and runs to meet him, embraces and kisses him with His grace. No sooner had the penitent pronounced his confession of his sin than the merciful Lord commanded the slaves—the servants of the altar and the holy Angels—to clothe him in bright garments of purity, to place his ring upon his finger as a testimony of his renewed union with the Church both on earth and in heaven, and to place shoes upon his feet, so that his actions would be protected from spiritual thorns by steadfast ordinances, for that is the meaning of the shoes—Christ’s commandments. To complete the action of love, a feast of love is held for the returned son, for which a fatted calf is killed. This feast signifies the Church feast to which the sinner is invited once he has made his peace with God—the spiritual, incorruptible food and drink—Christ—promised long ago to mankind, prepared through the unspeakable mercy of God for fallen man from the very moment of his fall.

The Gospel parable is a divine teaching! It is deep and exalted, regardless of the extraordinary simplicity of the human words in which God’s Word deigned to be clothed! The holy Church most wisely ordained that this parable be read to all before the beginning of the coming Forty Days Fast. What more consoling news could there be for a sinner who stands trembling before the doors of repentance than this news about the Heavenly Father’s infinite and unspeakable mercy for repentant sinners? This mercy is so great that it amazed the very Angels—the first-born sons of the Heavenly Father, who had never transgressed a single commandment of His. Their bright, lofty minds could not fathom the unfathomable mercy of God for fallen mankind. They needed a revelation from on High regarding this subject, and they learned from this revelation that it is meet for them to make merry, and be glad, for their lesser brother—the human race—was dead, and is alive again; and was lost, and is found, through the Redeemer. There is joy in the presence of the angels of God even over one sinner that repenteth.

Beloved brethren! Let us make use of the time appointed by the holy Church to prepare ourselves for the ascetic labors of the holy Forty Days Fast, in accordance with its purpose. Let us use it to contemplate the great mercy of God for people and for each person who wishes to make peace with God and unite with Him through true repentance. Our time in this earthly life is priceless; for during this time, we decide our eternal lot. May we be vouchsafed to decide our eternal lot unto our salvation, and to our joy! May our rejoicing be endless! May it be joined to the rejoicing of the holy Angels of God! May the joy of Angels and men be fulfilled and made perfect through their fulfilling the will of the Heavenly Father! For, it is not the will of your Father which is in heaven, that one of these little ones—human beings, deprecated and humiliated by sin—should perish (Mt. 18:14). Amen.

[1] See the Explanations of St. Theophylact.

Phyllis E. Amundsen13 февраля 2017, 02:00
Thank you for reminding us of the Parable of the Prodigal Son, and the unfathomable Mercy of our Lord, Jesus Christ.

Christine17 марта 2015, 05:00
I am really struggling because my sister on her conversion from sin pictured me in the parable as the older son. This conflict between repentance and faithfulness has continued for over thirty years - but has become more intense in the past five years. Can you help? What would the Holy Angels have done if mankind remonstrated with them and called them hypocrites for their faithfulness?
×