Of the Last Judgment

From City of God 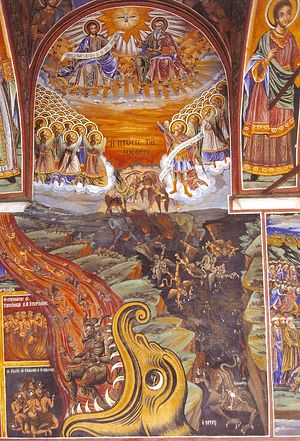 The Last Judgment. Fresco, Lavra of St. Athanasius, Mt. Athos.
Intending to speak, in dependence on God’s grace, of the day of His final judgment, and to affirm it against the ungodly and incredulous, we must first of all lay, as it were, in the foundation of the edifice the divine declarations. Those persons who do not believe such declarations do their best to oppose to them false and illusive sophisms of their own, either contending that what is adduced from Scripture has another meaning, or altogether denying that it is an utterance of God’s. For I suppose no man who understands what is written, and believes it to be communicated by the supreme and true God through holy men, refuses to yield and consent to these declarations, whether he orally confesses his consent, or is from some evil influence ashamed or afraid to do so; or even, with an opinionativeness closely resembling madness, makes strenuous efforts to defend what he knows and believes to be false against what he knows and believes to be true.

That, therefore, which the whole Church of the true God holds and professes as its creed, that Christ shall come from heaven to judge quick and dead, this we call the last day, or last time, of the divine judgment. For we do not know how many days this judgment may occupy; but no one who reads the Scriptures, however negligently, need be told that in them “day” is customarily used for “time.” And when we speak of the day of God’s judgment, we add the word last or final for this reason, because even now God judges, and has judged from the beginning of human history, banishing from paradise, and excluding from the tree of life, those first men who perpetrated so great a sin. Yea, He was certainly exercising judgment also when He did not spare the angels who sinned, whose prince, overcome by envy, seduced men after being himself seduced. Neither is it without God’s profound and just judgment that the life of demons and men, the one in the air, the other on earth, is filled with misery, calamities, and mistakes. And even though no one had sinned, it could only have been by the good and right judgment of God that the whole rational creation could have been maintained in eternal blessedness by a persevering adherence to its Lord. He judges, too, not only in the mass, condemning the race of devils and the race of men to be miserable on account of the original sin of these races, but He also judges the voluntary and personal acts of individuals. For even the devils pray that they may not be tormented (cf. Mt. 8:29), which proves that without injustice they might either be spared or tormented according to their deserts. And men are punished by God for their sins often visibly, always secretly, either in this life or after death, although no man acts rightly save by the assistance of divine aid; and no man or devil acts unrighteously save by the permission of the divine and most just judgment. For, as the apostle says, There is no unrighteousness with God (Rom. 9:14) and as he elsewhere says, His judgments are inscrutable, and His ways past finding out (Rom. 11:33). In this book, then, I shall speak, as God permits, not of those first judgments, nor of these intervening judgments of God, but of the last judgment, when Christ is to come from heaven to judge the quick and the dead. For that day is properly called the Day of Judgment, because in it there shall be no room left for the ignorant questioning why this wicked person is happy and that righteous man unhappy. In that day true and full happiness shall be the lot of none but the good, while deserved and supreme misery shall be the portion of the wicked, and of them only.

Again, in another passage, in which He was speaking of the present intermingling and future separation of the good and bad,—the separation which shall be made in the day of judgment,—He adduced a comparison drawn from the sown wheat and the tares sown among them, and gave this explanation of it to His disciples: He that soweth the good seed is the Son of man [Augustin quotes the whole passage, Mt. 13:37–34] etc. Here, indeed, He did not name the judgment or the day of judgment, but indicated it much more clearly by describing the circumstances, and foretold that it should take place in the end of the world.

In like manner He says to His disciples, Verily I say unto you, That ye which have followed me, in the regeneration, when the Son of man shall sit on the throne of His glory, ye also shall sit upon twelve thrones, judging the twelve tribes of Israel (Mt. 19:28). Here we learn that Jesus shall judge with His disciples. And therefore He said elsewhere to the Jews, If I by Beelzebub cast out devils, by whom do your sons cast them out? Therefore they shall be your judges (Mt. 12:17). Niether ought we to suppose that only twelve men shall judge along with Him, though He says that they shall sit upon twelve thrones; for by the number twelve is signified the completeness of the multitude of those who shall judge. For the two parts of the number seven (which commonly symbolizes totality), that is to say four and three, multiplied into one another, give twelve. For four times three, or three times four, are twelve. There are other meanings, too, in this number twelve. Were not this the right interpretation of the twelve thrones, then since we read that Matthias was ordained an apostle in the room of Judas the traitor, the Apostle Paul, though he labored more than them all (cf. 1 Cor. 15:10), should have no throne of judgment; but he unmistakeably considers himself to be included in the number of the judges when he says, Know ye not that we shall judge angels? (1 Cor. 6:3). The same rule is to be observed in applying the number twelve to those who are to be judged. For though it was said, “judging the twelve tribes of Israel,” the tribe of Levi, which is the thirteenth, shall not on this account be exempt from judgment, neither shall judgment be passed only on Israel and not on the other nations. And by the words “in the regeneration,” He certainly meant the resurrection of the dead to be understood; for our flesh shall be regenerated by incorruption, as our soul is regenerated by faith.

Many passages I omit, because, though they seem to refer to the last judgment, yet on a closer examination they are found to be ambiguous, or to allude rather to some other event,—whether to that coming of the Saviour which continually occurs in His Church, that is, in His members, in which comes little by little, and piece by piece, since the whole Church is His body, or to the destruction of the earthly Jerusalem. For when He speaks even of this, He often uses language which is applicable to the end of the world and that last and great day of judgment, so that these two events cannot be distinguished unless all the corresponding passages bearing on the subject in the three evangelists, Matthew, Mark, and Luke, are compared with one another,—for some things are put more obscurely by one evangelist and more plainly by another,—so that it becomes apparent what things are meant to be referred to one event. It is this which I have been at pains to do in a letter which I wrote to Hesychius of blessed memory, bishop of Salon, and entitled, “Of the End of the World.” [Ep.199].

I shall now cite from the Gospel according to Matthew the passage which speaks of the separation of the good from the wicked by the most efficacious and final judgment of Christ: When the Son of man, he says, shall come in His glory, . . . then shall He say also unto them on His left hand, Depart from me, ye cursed, into everlasting fire, prepared for the devil and his angels (Mt. 25:34–41), given in full. Then He in like manner recounts to the wicked the things they had not done, but which He had said those on the right hand had done. And when they ask when they had seen Him in need of these things, He replies that, inasmuch as they had not done it to the least of His brethren, they had not done it unto Him, and concludes His address in the words, And these shall go away into everlasting punishment, but the righteous into life eternal. Moreover, the evangelist John most distinctly states that He had predicted that the judgment should be at the resurrection of the dead. For after saying, The Father judgeth no man, but hath committed all judgment unto the Son: that all men should honor the Son, even as they honor the Father: he that honoreth not the Son, honoreth not the Father which hath sent Him; He immediately adds, Verily, verily, I say unto you, He that heareth my word and believeth on Him that sent me, hath everlasting life, and shall not come into judgment; but is passed from death to life(John 5:22–24). Here He said that believers on Him should not come into judgment. How, then, shall they be separated from the wicked by judgment, and be set at His right hand, unless judgment be in this passage used for condemnation? For into judgment, in this sense, they shall not come who hear His word, and believe on Him that sent Him.

From The Nicene and Post Nicene Fathers, by Phillip Schaff. For the complete text, see Christian Classics Ethereal Library. 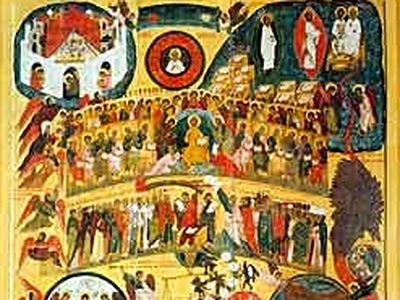 When Thou Shalt Sit to Judge the World, Count Me Worthy to Sit at Thy Right Hand

When Thou Shalt Sit to Judge the World, Count Me Worthy to Sit at Thy Right Hand
Then begin the torments—according to the Holy Gospel, weeping and the gnashing of teeth, where their worm dies not and the fire is not quenched—and the sinner shall be cast into outer darkness. The entire Church of God will joyfully delight in attaining the Kingdom of Heaven, being close to God in His holy place, and receiving everlasting glory and exaltation.

Meatfare Sunday
The next time that you set out to destroy someone’s reputation, break someone’s heart, show indifference and even ignorance toward a person, or maliciously gossip about someone, remember that Christ says that you’re doing exactly the same thing to Him! 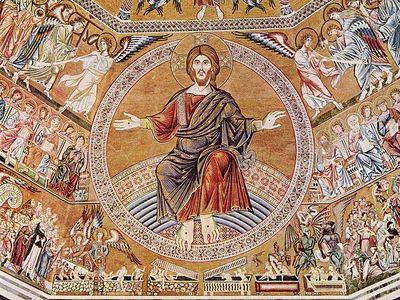 On the Second Coming of Christ
St. Ignatius (Brianchaninov)

On the Second Coming of Christ
St. Ignatius (Brianchaninov)
Mercy will present to Christ also those who were only able to show mercy to themselves, who visited themselves with self-criticism and freed themselves from the poverty, sickness, and prison of sin through repentance. Repentance is impossible for the hardened heart: the heart must be softened, filled with sympathy and mercy toward its catastrophic state of sinfulness.
Комментарии

Dominic Jai 9 марта 2013, 23:00
"Augustine of Hippo is the fount of every distortion and alteration in the Church's truth in the West" Christos Yannaras "Lord deliver us from the Augustinian dialectic". Saint Gennadius Scholarius.
×