In the name of the Father, the Son, and the Holy Spirit! 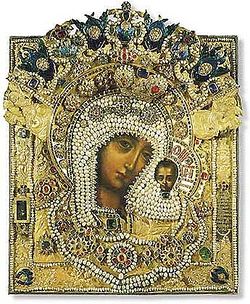 Today the feast of Most Pure Sovereign Lady, the Theotokos, speaks to us of Her intercession for our Fatherland. For hundreds of years, Russian Orthodox people have prayed to the Most Pure Mother of God, knowing that she always protects us and helps us when human strength fails, or when our mistakes have gone so far that we ourselves cannot set things right.

But lately the unfortunate opinion has arisen amongst some of the clergy that the very thought that the Lord, the Most Holy Theotokos, and the saints help our Fatherland—is false; even worse—it’s not Orthodox; that a person’s love for his Fatherland is also not spiritual, and not Orthodox. They say, “We have only one Fatherland, in heaven, and we should not let our hearts become attached to an earthly Fatherland.” This is not the Orthodox tradition, they say.

But is it that really how it is? The troparion of today’s feast of the Kazan Mother of God speaks to the contrary: “O Fervent Intercessor, Mother of God Most High”. She is an Intercessor for every person and for our earthly Fatherland. This Fatherland may not be in very good shape, but it is an Orthodox Fatherland, which is an image of Christ’s Church. Why do we love Holy Rus’? Because it is a history, a nation, a people, the yearning of all the Orthodox peoples living in our land for God, for the Heavenly Kingdom—that very heavenly Fatherland which truly is our main goal, our main homeland—that vineyard planted by the Lord on earth. We have read the Gospel parable of the vineyard: the Lord gave us this vineyard so that we would cultivate it, and bring its fruits to God. We cannot neglect that vineyard of God; we must love it and take care of it. Therefore, when they tell us that our love and care for our Fatherland is not Orthodox, we should know that this is a serious mistake made by those who have been either lead astray by the spirit of evil, or who do not want God’s Church to flourish here on earth.

This is a complex, difficult time for our Fatherland. We don’t need any propaganda or news to tell us about it—we can see for ourselves how hard it is for people to live, how many mistakes have been made and are being made, and how hard it is to find the strength to change. We see how much injustice there is in our land, and we can look at it in two ways: coldly, or even angrily. Or we can show some concern for this sick vineyard and heal it, according to the measure of strength and possibility given to each of us by God. Some He has placed in authority over the whole vineyard, and much will be demanded of those people; some He has placed over a particular plot, and these people will be held responsible for their portion of the vineyard; some He has placed in charge of but a single vine—those are each one of us, and we will be held responsible for the health and fruitfulness of that vine.

If we will be careless and lazy, if we will not take care of ourselves, and of what the Lord has planted… We recall the parable of the evil husbandmen. What did the Lord do with those evil husbandmen? They were punished and the vineyard was given to someone else. Throughout the history of Russia there have been many instances when we, who confess the Christian faith, both then and now, betrayed our divine calling, departed from faith in God, and ceased to care for the vineyard entrusted to us by the Lord. Then terrible catastrophes ensued, thieves came, enemies arose from within the land, and disease consumed our Fatherland and every person, and most importantly, the Church. But we always found the strength to overcome this, to restore the health of individuals, society, and the earthly Church. And in the final analysis, Holy Russia acquired sanctity.

Let us recall what terrible trials have come upon Russia. We won’t even go very far back in history. In the seventeenth century, the Poles—the Latins—took over our entire country. We say now that it is hard for us, and of course, it is hard. But just imagine: Poles in Moscow, in the Kremlin’s Dormition Cathedral; Roman Catholic services are being conducted, all the boyars have sworn fealty to the false Dimitry. They all knew perfectly well who he is: a thief, a runaway monk. Nevertheless, all swore fealty to him as to Tsarevich Dimitry. The clergy nearly swore allegiance as well. Tsarevich Dimitry’s mother, a nun living in a distant convent, was brought frightened to Moscow; she said that, yes, he is her son, although she well knew that he wasn’t, for her son had been murdered in Uglich. Such spiritual corruption, such faintheartedness, such fear had conquered the Russian land. Didn’t that deserve punishment? That spirit, which set the stage for these actions—after all, it did not all come about in a minute, it had been forming for many decades. Only a few people—Patriarch Job and Patriarch Hermogenes, who was tormented in the Chudov Monastery—had the courage to fulfill the will of God, by speaking out for the truth.

It was then that the special mercy of God was shown through the Kazan icon of the Mother of God. Then people understood that they could no longer lie, no longer live with such a false heart, distorting Christ’s Church on earth, that they could no longer betray Christ; and the Lord gave them the strength to rise up, and once again, Orthodoxy and sanctity became the most important thing in our Fatherland. Then the heavenly Fatherland saved the earthly Fatherland, for they are inseparable.

In the year 1812, Moscow was again taken by the enemy, churches were burning—the churches of Moscow were desecrated. And again, prayers; again the Kazan icon of Mother of God was born on the battlefield of Borodino, and the foe retreated. Again, God had mercy upon us. Why? Because our ancestors did not just complain about how bad things were. In their hearts arose the decisiveness to make things right—first of all themselves. All the unrighteousness that was within every husbandman, and all their faithlessness with regard to each vine—each portion, entrusted to each person. All realized that they must live differently, and relate to God and neighbor, to their Fatherland, in a completely different way. Then, gradually, but in the historical sense, very quickly, everything changed in our Fatherland.

Glory be to God, this is how those troubled, onerous times came to a close in our land. But things can turn out differently. Byzantium, the New Rome, our predecessor, that great nation, was many times on the verge of ruin, of total enslavement. But each time, when disease had overcome the people of Byzantium, they found the strength to return again to God, through their right confession of the faith. Not just individually but collectively—the entire Church, the entire Fatherland, the entire nation. And then the Lord granted them salvation. This often happened when people grasped that they can turn to God only through His Mother, to whom He will never refuse succor, even when our sins and iniquities spill over the cup of His patience and justice. The people cried out to the victorious Queen of the Heavenly Hosts. Only when our ancestors the Russians were standing outside the walls of Constantinople ready to conquer it, did the sated, slothful people of that city understand what an illness had befallen them and that they needed to correct themselves—just as we now understand that we must take stock of our own lives in many respects, now that sorrow and disease has overtaken us.

But the time came when the people of the New Rome, Constantinople, had no more strength to transform their minds, to repent. Repentance in Greek is “metanoia”, change, transformation of mind, a correct change of thought. So, in 1453, Constantinople fell. But let us recall what led up to that event. Sad as it is to say, the last emperor of Constantinople was a Uniate—that is, a Catholic. The people betrayed Orthodoxy not because they did not love their faith—certainly, they loved it—but because they did not trust in it; they trusted more in their Western allies, who promised to come and route the Turks from the surrounding areas. We all know how that vain hope ended. Constantine XI Palaeologos and his predecessor accepted the Unia. The last Patriarchs of Constantinople were Uniates. People placed their hope mainly in human strength—in princes, in sons of men. We know the words of the psalm: Trust ye not in princes in the sons of men, in whom there is no salvation. History has shown the truthfulness of these words. No one came to the aide of the New Rome. It fell; but the Lord, in a marvelous way, preserved the most important thing—the heart of Orthodoxy.

Let us think a moment about this. Of course, history does not know the subjunctive tense—“If only…” However, take a look at our Western Ukraine. The Unia came there also, and now nothing can remove it. Nothing can air out or sober up that land. We know that, and history shows it. We could suppose that if the Turks had not taken over Constantinople, all of Byzantium would have become Uniate in thirty or forty years. It would all have become (Roman) Catholic. That process was under way. Yes, there were priests, monks, hierarchs, and of course ordinary people who stood against it, but the Uniates were infiltrating Constantinople more and more. Decades would have passed, and then Constantinople would have fallen for real, having betrayed Orthodoxy. But the Lord allowed Sultan Mehmet to conquer Constantinople. The sultan feared more than anything that the Byzantines would unite once again with Western Christians, and so he placed Gennadios Scholarios—the greatest foe of the Unia—as Patriarch. Mehmet rested content that Gennadios would never agree to the Unia. Thus, the Patriarch had every opportunity to preserve Orthodoxy and destroy the Unia within that Orthodox nation. The most important thing was saved—the true confession of the Christian faith.

We are all responsible for our own salvation. But we are also responsible for the salvation of our Fatherland. How? Let us recall the words of St. Seraphim of Sarov: Acquire the spirit of peace, save yourself, and thousands around you will be saved. But let us not be deceived. That cross is an extraordinary responsibility, and the reward for upholding it is very great, but punishment for not upholding it is terrible. We are given a cross according to our strength. But we must suffuse everything around us with the will of God, with Orthodoxy, with love—which people seek, and which God finds. We must show mercy, and a true Christian example. Then the Mother of God will always help us in this work, and in all human sorrows that come to us throughout the course of our life. Then we, turning to her with the words, “O fervent Intercessor,” will feel that these are not just our words, but our experience. Each one of us is called to be that very husbandman of Christ’s vineyard. Each of us must take care of that vine in our earthly Fatherland, where we were placed. Let us remember what that vine is for each of us: our neighbors, and the work that has been entrusted to us. Let us regard this as the highest responsibility—responsibility before the Lord God. May God help us all—not only to contemplate this, but also to fulfill it. And our Helper in this will then undoubtedly be the Most Holy Mother of God. Amen.