A Dream: About my vision of Patriarch Tikhon 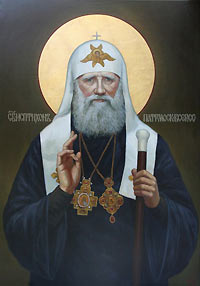 St. Tikhon, Patriarch of Moscow and All Russia
Generally we should not believe in dreams.

The holy fathers even talk about the special “virtue of not believing in dreams” (Blessed Diadodochos, in The Philokalia). However, sometimes they can be true in an obvious way.

I will very briefly tell you about my vision of Patrirach Tikhon.

It was as if I was in some very large huge city. It seems it was Moscow… but on the very outskirts. There were no streets, only houses scattered here and there… an uneven place… clay pits. Beyond it were grasses and an endless field. I found myself in one of those houses, basically a peasant’s hut. I was dressed in a ryassa, without my bishop’s panagia,[1] although they all knew that I am a bishop. There are ten or fifteen people in the hut, all simple peasants without exception. No rich, famous, or scholarly people.

They are silent. They move around languorously, just like autumn flies on a window before the winter frosts… I say nothing, I cannot talk—they haven’t the strength to hear reproach or instruction, or anything about God for that matter. Their souls are wounded by both sins and troubles, and they are incapable of rising from their fall, they are people with burnt skin, and can’t be touched even lightly… Sensing this, I say nothing. It is sufficient that I am in their midst, that they not only “bear” me, but even feel comfortable around me (not familiar or impudent, however), are not timid, and consider me one of them.

“Only be silent,” their hearts say silently to me, “it is enough that we are together… Don’t touch us—we have no strength.”

I am sad for myself that I cannot do anything, and even sadder for them because they are so miserable.

Suddenly, someone says, “The Patriarch is coming.”

It was as if they were expecting him. We all went outside. I was with the group.

We looked, and Patriarch Tikhon was moving almost above the earth, in his hierarchical mantle and a black monastic klobuk (not in a white, Patriarchal kukol). Behind him was an assistant, holding the end of his mantle. There was no one else in his entourage…

And there was no need for one—these were sick souls, and extra pomp would have been too much for them to bear.

We looked at the holy hierarch approaching us and saw how his face was shining with an extraordinarily tender smile of love, sympathy, and consolation. Well, it was such a sweet smile that I could almost feel a sweet taste in my mouth…

He was sending all of this sweetness of love and affection to these people! He didn’t notice me at all… And he approached nearer.

Suddenly I felt that something was changing in the hearts of all the peasants around me; they were beginning to “come to themselves”, to melt, like flies at the first rays of the spring sun. I could even feel within my body as if something in both me and them, “under the heart”, began to “unloose”, relax. It was as if something was falling away. Later I learned that in that spot is located a nerve center called the “solar plexus” (where people feel the onset of grief)…

I began to read their thoughts through their eyes: “Look, His Holiness is smiling… It means that we can breathe easier!”

Then all became easier and lighter for them—the poor, downtrodden ones.

His Holiness came closer and closer, smiling more and more. His face was framed by a reddish beard.

When he had come quite near, I could see that my neighbors were also smiling, but still very, very little.

“So, only now,” a thought struck me, “now something can be said to them, now they are capable of hearing it, for their souls have melted. But there in the hut there could be no thought of teaching.” 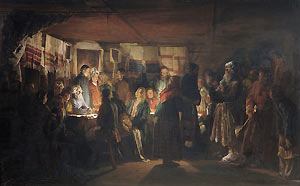 I understood that we must first warm the sinful soul, and correct it only afterwards. His Holiness could do this—he greatly loved these sinful but miserable children of his. And he warmed them with his love.

I understood that earlier it was not possible (for me) to talk to them, and therefore it was not necessary. That is why we were silent in the hut. I marveled at the great power that love has!

His Holiness came closer. It seems that we—in any case, I—bowed at his feet. When I arose I kissed his hand. It seemed soft and tender to me.

I presented myself to him first, as a bishop. But strangely, he did not ascribe any importance to this at all, as if he did not notice me. This seemed very upsetting to me. All his love was directed to these sorrowful, downtrodden, simple people.

Finally, unable to restrain myself any longer, I decided to ask him a silent question (without words—with the heart, but his heart already felt was I was thinking):

“Vladyka! What should we do there (outside of Russia)?” That is, about the division in the Church between Metropolitan Anthony and Metropolitan Evlogy. “Where should I go?”

He immediately understood my question, but apparently he was not the least bit interested in it; in fact, it seemed to trouble him. His previously shining smile disappeared.

I waited for an answer… What answer? I could have said to him, “Should I go to Met. Anthony, or to Met. Evlogy—or something to that effect, or about the division in general… But his answer was totally unexpected, something I could never have thought up:

Those were the astounding and unexpected words His Holiness said to me. Not about metropolitans, not about divisions, not about jurisdictions, but about serving the people… Precisely the people, that is, the simple people… It was no coincidence that there were only peasants in the hut (and my father, who was a serf)…

He did not use the plural form of the word “serve”, but the singular, which meant me personally. Then the meaning of the Patriarch’s words became clear to me:

“Why are you bishops arguing amongst yourselves? Is it all about you? The issue is the people’s salvation, and specifically the simple people. If they are saved, then all will be well. If they are not saved, then it is all over. What is a general without his soldiers?”

Then suddenly the whole argument about authority paled…

Then, an answer was required of me…

But—to my shame!—I felt the difficulty and boredom of the everyday work of those people with whom I had been silent in the hut. I was overcome by some kind of temptation, and like a slave with no will of his own, I made an attempt to refuse the cross…

“Vladyka!” I “said” in my heart, “They are offering me a bishopric!”

Then an enormous church appeared to me. I was in my mantle. They were singing… but the church was empty. I went to the altar…

But His Holiness became suddenly sad, and I could read in his gaze:

“You are foolish, foolish! What benefit comes from being a bishop if there is no one to serve? After all, the people are not for the bishop, but the bishops are servant of God for the people”…

I felt very ashamed… And I was ready to take my words back, but—alas!—it was too late. They had already been uttered. Then the Patriarch added, “Well then go to Antony…”

“Well then go,” that is, out of those two paths (as compared with serving the people) choose what is relatively better…

Then something was said about a monastery, something forgotten… the mist… the end, and he was no longer seen.

I found myself in a house (perhaps the same hut, I don’t know).

I walked to the head, and St. Joasaph stretched his hand back and affectionately patted me on the right cheek.

The dream ended. I awoke.

Such was my dream. Several months passed afterwards. I read the dream to an acquaintance (the notes are lost). Then suddenly a question came to me:

I looked at the time of that dream, and it turned out to be his commemoration day (September 4, O.S.) A remarkable concurrence.

This strengthened my thoughts that this was not an ordinary dream. I sent it to the elders on Mt. Athos, who answered, “A significant dream!” but did not explain the details…

I understood it to mean that I should go to Russia to “serve the people”.

So I got ready to go… I had already received permission, when suddenly Metropolitan Evlogy (with whose knowledge I was secretly making preparations) sent me a letter pleading me “in the name of our Lord Jesus Christ” to cancel the trip, so that there “would be no scandal” amongst the emigration, and promised to somehow arrange something for me.

I stopped not before “the emigration” but before the name of God… And I answered him by telephone that I have to obey… He thanked me.

I went out into the garden of the St. Sergius metochion and… wept bitterly. I had refused to “serve the people”[2]

And I still grieve when I remember this. I should have prayed for three days, and the answer would probably have been different…

[1] The pectoral icon on a chain worn by a bishop.