St. Cyril of Chelmogora, Enlightener of the Karelian Wilds 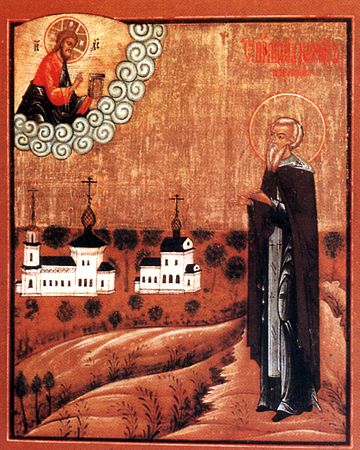 St. Cyril of Chelmagora
St. Cyril of Chelmogora is one of the first desert-dwelling monks to come to the Lake Onega region to preach the Gospels. The wonder-worker was venerated in Olonetz province, especially by the people near the city of Kargopol, who considered him the protector of their region.

We know about the life and miracles of this ascetic from his Life, most likely written in the fourteenth century. The original text was not preserved, and what we have now is an edition by Priest Feodor Guriev, who served in the Chelmogora monastery in the mid eighteenth century; he copied the Life and filled out the biography of St. Cyril with some oral tradition.

We do not know the exact time of the saint’s life. According to Church tradition, he was born in the area of Novgorod at the end of the thirteenth century. At the age of twenty-one he entered the monastery of St. Anthony in Novgorod the Great, where he received monasticism and performed various obediences for six years. Then, after leaving the monastery, he spent three years wandering until he came to a solitary place on Chelma Hill, at the mouth of the Chelma River, which empties into a small forest lake. His Life says that “this place had a hill that was not very large, but covered with berries and trees, and this hill was very beautiful, and no man ever lived here before; and St. Cyril rejoiced exceedingly in spirit and loved it greatly.” With the words, “This is my dwelling and rest unto the ages of ages, here I am glad, for the Lord has willed and shown love for my soul,” the saint resolved to remain on the tall bank of the lake and to dig a cave in the hill, where he would labor in asceticism until he built a log chapel and a small hut for a cell. He fed himself with vegetables from his own garden, and with wild herbs.

According to the testimony of his contemporaries, St. Cyril had the appearance of a “noble elder.” “His head was of a magnificent appearance, his face was bright, pale, and pleasant, his beard was large and long, his hair was reddish blonde and graying, his gaze was meek, and his forehead was tall.” Having settled in this rough land inhabited by pagans, St. Cyril preached the Gospels to the local tribes, which the Russians called “the white-eyed Chud” and “pagan raw meat-eaters”. The ascetic lived for over a half century on Chelma Hill. During that time, the demons and “savage people” tried many times to burn down his cell and to compel the saint to leave, but the elder always conquered his enemies by the power of prayer and the sign of the cross. “His glory spread throughout the territory,” and impressed by St. Cyril’s ascetic feats, his determined labor, patience and meekness, the local inhabitants gradually began to accept his Christian teaching and to revere their desert-dwelling neighbor. “Orthodoxy began to flourish and piety spread: all the Chud received Holy Baptism.” Tradition says that the fishermen of Lekshma Lake would bring the desert-dweller part of their catch as a sign of respect.

St. Cyril died in deep old age; according to his hagiographer he was eighty-two. Just before his death he received the Holy Mysteries of Christ from the hand of Abbot Joseph of the Strokina Monastery of the Savior near Kargopol, who came to visit him. Several years later, according to his Life, monks came to Chelma Hill from Novgorod and placed a gravestone over the saint’s grave.

St. Cyril was glorified by many miracles. We will relate one of them. In 1674, on the eve of the Nativity of Christ, Monk Martyrius was seriously burned all over his body while saving church utensils and service books from a burning church in Chelmogora Monastery. The monk’s sufferings ended on the feast of the Meeting of the Lord, when St. Cyril of Chelmgora and St. Macarius of Zheltovodsk appeared to him, telling him to pronounce out loud the words, “The Light of Christ enlightens all”. St. Cyril’s Life says that he then wiped the ailing monk’s eyes with his mantia, and healed him.

Sometime after the saint’s repose, a monastic community gathered at the site of his solitary cell and a whole monastery grew around it—the Chelmogora (Chelmensky) Hermitage, one of the oldest monasteries of the Olonets diocese. Its main church was dedicated to the Lord’s Theophany. It housed the monastery’s most important holy shrine: in the side-altar dedicated to St. Cyril of Chelmogora was a grave-covering over his relics, which reposed underground. Not far from the monastery church dedicated to the Dormition of the Mother of God, where according to tradition St. Cyril’s cave was located, a wooden cross stood under a roof, surrounded by a flower garden. In the 1930’s the entire monastery was destroyed [by the Communists —OC]. 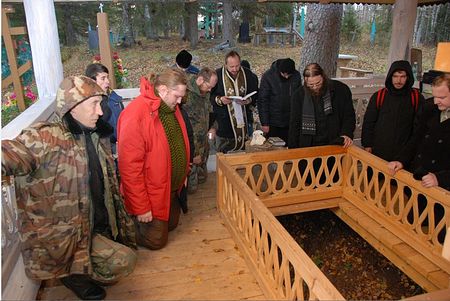 Sretensky Monastery clergy and seminarians from the Sretensky seminary pray with local people at the site of St. Cyril's relics.
The people who live near Chelmogora today have not forgotten their saint. Every year on his commemoration day, people come from as far as Moscow, braving the cold and rural roads to serve a moleben at the site of the Chelmogora monastery. —OC.

James J.REad22 декабря 2011, 11:00
It is wonderful to see the biography of yet another Russian saint in English. Whilst understanding those Orthodox who want Russian preserved, it is unreasonable to expect the thousands of converts in the United States and WEetern Europe to learn the language. Now Praise God, this spiritual material is available in a language not only used in Britain & the U.S.A but widely understood in many parts of the world,

James J.REad22 декабря 2011, 11:00
It is wonderful to see the biography of yet another Russian saint in English. Whilst understanding those Orthodox who want Russian preserved, it is unreasonable to expect the thousands of converts in the United States and WEetern Europe to learn the language. Now Praise God, this spiritual material is available in a language not only used in Britain & the U.S.A but widely understood in many parts of the world,