Metropolitan Hilarion of Volokolamsk: the Russian Revolution was prepared abroad 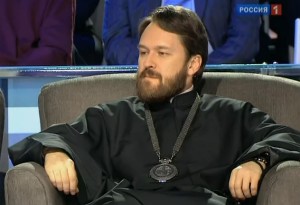 On March 2, 2012, Metropolitan Hilarion of Volokolamsk took part in the talk-show ‘The White Guards. Foreward’ on Russia-1 TV channel. It was devoted to the TV serial premiere ‘The White Guards’, a new cinematographic reading of Mikhail Bulgakov’s novel as interpreted by film director Sergey Snezhkin. Producers, historians and writers gathered together to discuss historical developments which preceded the writing of the novel.

As Metropolitan Hilarion noted, the tragedy of the Russian pre-revolution intelligentsia lay in the fact that they were far from the people and the Church. ‘The people and the Church are an inseparable whole. The Church was the core of our people’s life. Look, what our intellectuals taught the people to and from where they taught it. They had left for Paris or Zurich and from there they taught our people how to improve their life. The Russian Revolution, first the February one and then the October one, were prepared abroad by our Russian intellectuals who lived abroad. Instead of listening to the voice of the Church and turning to the history of our country, they based their ideas on utopian theories which they then tried to impose on our people, to impose on us a matrix alien to our life’.

According to the metropolitan, precisely this was the tragedy of the 1917 Revolution, as it took an enormous toll of human life. ‘All this order, all this system was not fit for the living. And these living people had to be cracked and trampled upon in order to make the revolution ideals triumph’.

Responding to a remark by the Russian Federation State Archives S. Mironenko that the metropolitans were the first to recognize the Provisional Government and to identify with the new power, the DECR chairman said that not all the metropolitans supported the 1917 February Revolution. ‘There were differences within the Church. Some sympathized not with revolutionaries but with those who wanted to change the system, but most of the church people did not sympathize with them but actually were against them’. According to Metropolitan Hilarion, the Church did not recognize the Soviet power, pronounced an anathema against it and this was followed by a long and hard period when the Church tried to adjust to the new reality.

The DECR chairman underscored that the Church’s attitude to the civil power is dynamic. ‘The Church has always called to obey the power whatever it may be. The Church is not a political force which would say: this party is good and that one is not. The Church throughout her history has lived in any historical situations and any political systems’, he said.

He also said that ‘the Revolution was an anti-church act. What were the first decrees and the first statements to be issued by the Bolsheviks when they came to power? They were aimed against the Church as the people’s conscience. Then they began to crack it first by repressing its members, then the bourgeoisie and after that began repressing their own’. His Eminence stressed that the Soviet power was not only anti-church but also anti-people. ‘When the authorities openly came upon the Church, they came upon the people. And they could not do otherwise because the godless slogans taken up by the Bolsheviks inevitably made the power anti-popular, making it build its existence on violence’, he said.