Sermon on the Feast of the Three Hierarchs 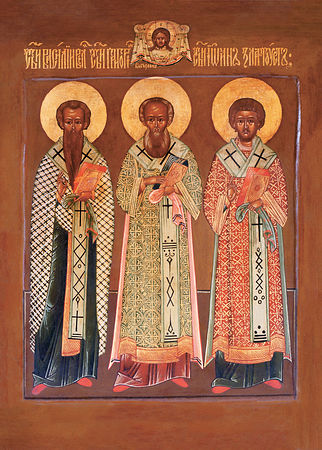 Synaxis of the Three Hierarchs: St. Basil the Great, St. Gregory the Theologian, and St. John Chrysostom
Dear brothers and sisters in Christ!

There is much in common among the three hierarchs and great ecumenical teachers whom we commemorate today: Saints Basil the Great, Gregory the Theologian and John Chrysostom. All three lived in a time when the Christian Church, after almost three centuries of persecution, received freedom and was flourishing throughout the Byzantine ‘oikoumene’. All the three were involved in contesting contemporary heresies, of which the most dangerous was Arianism, which rejected the Divinity of Jesus Christ. All the three combined serving the Church in episcopal rank with literary activity, and it is precisely their literary legacy which secured for them the paramount place that they occupy in Christian Tradition. All the three were victims of ecclesiastical intrigues, and suffered — in one way or another — from their fellow bishops: in fact, two of the three (Gregory and John) were deposed and died in exile. Their posthumous glory, however, exceeded any expectations their contemporaries might have had, and their significance for the entire Christian Church in East and West cannot be overestimated.

A particular common characteristic of the three holy hierarchs was their love for scholarship and learning. Gathered as we are today, in this place of Christian learning, in this chapel of which they are the holy patrons, it seems appropriate to remind ourselves of some features of their attitude toward scholarship. In what follows I will focus mostly on St Gregory the Theologian’s teaching on this subject.

Gregory was educated in the Academy of Athens, where he extensively studied Greek literature, poetry and philosophy. Apart from Greek authors, he also read the Christian Scriptures, as well as the writings of Origen, from whom he may have inherited the high respect for ancient Greek scholarship. Gregory’s closest friends, Basil the Great and Gregory of Nyssa, contributed considerably to the development of Greek scholarship on Christian soil. St Basil wrote a famous ‘Exhortation to Youths as to How They shall Best Profit by the Writings of Pagan Authors’, where he recommends Christian youth to use the works by ancient Greek writers, poets and philosophers for educational purposes. The same approach is exhibited by Gregory of Nyssa, who allegorically interpreted the ‘jewellery of silver and of gold’, stolen by the Jews on their departure from Egypt (Ex. 12:35-6), to be the wealth of pagan learning which Christians must borrow from the Greeks. He said that this wealth included ‘natural philosophy, geometry, astronomy, dialectic, and whatever else is sought by those outside the Church’.

The fourth-century Fathers realized that they were living at a time when the scholarly and intellectual wealth inherited from ancient Greek culture needed to be appropriated by the Christian Church. While insisting on the superiority of Christian learning over Hellenistic wisdom, they at the same time thought it necessary for Christians to accumulate everything positive that had been amassed by human civilisation outside Christianity.

St. Gregory the Theologian
In accordance with these views Gregory the Theologian promoted the idea that heathen culture and Hellenistic education do not belong to the pagans: though pagan in origin, they belong to the Christians as long as Christians are able to receive them. Not only Greek scholarship, but also world civilisation in general belongs to the Christian Church, Gregory claimed. Together with Origen and Gregory of Nyssa he was convinced that the jewellery of Egypt, which symbolizes pagan learning, must not be left by the New Israel (Christians) in the hands of Egyptians (pagans).

We may note that early Christian literature at times saw human civilisation, art and culture, as being demonic in their provenance, since they result from the fall. John Chrysostom himself wrote that ‘cities, arts, clothes and many other things… were introduced by death’. In the ‘Macarian Homilies’ we read that wise men, philosophers, writers, poets, artists, sculptors, architects and archaeologists were ‘prisoners and slaves of the evil power’ and worked under the influence of the devil.

Yet many church writers pointed to the positive aspects of human civilisation and culture. Gregory the Theologian was one of them. He argued that no nation, religion, or philosophical school can monopolise culture, science and art, because these belong to the whole of humanity. For Gregory, it is God himself who is the true creator of human civilisation, and the artists are instruments in God’s hands: ‘Language belongs not to those who invented it but rather to all who use it, and so also art and every occupation which you can imagine. In music, each string has its own sound, high or low — so also in these arts the Divine Word, Artist and Creator, appointed various inventors of various occupations and arts, giving everything to those who desire to use it, in order to unite us by the bonds of common life and friendship, and to make our life more civilised’.

Gregory the Theologian respected everything which demonstrates the power of human reason, be it humanitarian and natural sciences, rhetoric, literature, poetry, music or other arts, even the art of circus trainers, about which he spoke with great admiration. Gregory’s ideal is a man of reason, of high intellectual culture, of great erudition, who combines the true faith with knowledge in various fields and with an open attitude to the world. It is reason that makes humans alike to the divine Logos. Many of Gregory’s poetic works contain praises of reason, education, and scholarship. ‘Consider reason as the lamp of your whole life’, he says. ‘Do not think that there is anything better than education’, he writes elsewhere.

At the same time Gregory underlines that education should not be considered as an aim in itself: it is necessary in order to bring one to the knowledge of God and to contribute to one’s progress in faith. One has to study in youth in order to offer the fruits of one’s learning to the divine Spirit when one reaches maturity. This was Gregory’s own aspiration from his early years. In the twilight of his life he wrote: ‘One glory was pleasing to me, to progress in literary sciences, which are collected by East and West, and by Athens, the glory of Greece. In them I toiled much for a long time. But even these I placed before Christ, having prostrated myself, in order that they should give room to the Word of great God, which eclipses any changeable and diverse invention of the human mind’.

Thus, secular letters and the fullness of non-Christian culture withdraw into shadow when a person encounters Christ. Compared with the Divine Word, every human word is nothing but myth, tale and invention. Yet the studies of Greek philosophy, mythology, poetry and other humanitarian and natural sciences are necessary in order to bring them to Christ’s feet.

Gregory the Theologian had before his eyes many living examples of true Christian scholarship. One of them was Basil the Great, his friend and classmate, of whose erudition and learning he spoke with admiration. Praising Basil’s knowledge of rhetoric, grammar, history, poetry, philosophy, astronomy, geometry, mathematics and medicine, Gregory exclaims: ‘He was a ship loaded with scholarship insofar as human nature can possibly accumulate’. Remembering their days in the Academy of Athens, Gregory writes with nostalgia: ‘Two ways were familiar to us: the first and more precious leading us to our sacred buildings and the masters there; the second. to our secular teachers. All else-festivals, spectacles, assemblies, and banquets-we left to those with a taste for such things. Our great concern. was to be Christians and be called Christians’.

Being a defender of the Greek paideia, Gregory the Theologian was a strong opponent to any kind of ignorance and obscurantism. Resistance to learning, contempt for education and unwillingness to accumulate the richness of human culture are, according to Gregory, incompatible with Christianity. The understanding of Christianity as a semi-catacomb sect which encloses itself by thick walls of suspicion and prejudice, opposed to the outside world, is alien to Gregory. On the contrary, Christianity must be open and all-embracing enough to be able to contain within itself the achievements of human reason.

In our days there are people who say: ‘It is not necessary for a Christian to study much: the important thing is to observe the rules of the Church’. Some even claim that great learning is an obstacle to salvation and refer to the ‘ancient times’, when ‘there were bishops and priests who could neither read nor write, who were not versed in sciences, and still achieved genuine holiness’.

To this we must first of all reply that there were nevertheless other bishops and priests who could not only read and write, but who were among the most brilliantly educated people of their times: Basil the Great, Gregory the Theologian and John Chrysostom, together with many other great hierarchs and teachers, belonged to this group. Secondly, even those bishops and priests of Christian antiquity who did not know how to read or write were not necessarily uneducated: many of them studied sciences orally (which was quite widespread in those days). Thirdly, we are no longer in the fourth, the fourteenth or even the nineteenth century; we have entered the twenty-first century, where it is very unlikely that there will be any place for ignorant and half-educated clergy. Priests and lay leaders seeking to build the Church in our times, to defend it from the attacks of enemies both internal and external, must themselves be educated. Priests wishing not only to save themselves, but others as well (which is precisely the essence of priesthood), not only the ignorant and the illiterate, but also the intelligent and the educated — such priests must themselves be educated.

Our time, dear brothers and sisters, is not less challenging for the Church than the time of the fourth century, and the mission which is set before us is in no way less important than one carried out by the great hierarchs and teachers of the past. In order to face the challenges of modernity we — I now mean especially the pastors and future pastors of the Church gathered here — must be highly educated.

Dear students! Use the time which is given to you to acquire as much knowledge in different fields of scholarship as possible in order to be able to put it to Christ’s feet, when the time comes. Follow the example of the great hierarchs of the past, whose worldly erudition did not prevent them from but, on the contrary, assisted them in becoming true pillars of the Church. Follow also the example of the teachers of our times, such as Fr Alexander Schmemann and Fr John Meyendorff, whose legacy is preserved by this Seminary and who combined total dedication to serving the Church with great erudition and scholarship.

May this school be for you a true place of learning, a new Academy of Athens, in which you will know only two ways: the way to the church and the way to your teachers. May you become ‘ships loaded by scholarship’ insofar as your human capacity allows. And may the prayer of the three great hierarchs, whose memory we keep today, assist you in your studies and in your spiritual life. Amen.