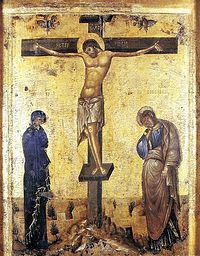 Let us consider what it means that Jesus life was made a ransom “for many.” With respect to this latter expression, its meaning in Mark 10:45 must take into account the very similar words pronounced by Jesus at the consecration of the Eucharistic cup during his final Seder:

“This is my covenant blood, which is shed for many.”

Here, implicitly, Jesus’ blood is the instrument of our redemption.

These two Markan texts, which demand to be considered together as coming from the lips of Jesus, certainly rely on the imagery of Isaiah’s Suffering Servant, as presented in Isaiah 53.

For the early understanding of the Atonement, hardly any Old Testament text rivals the importance of this Isaian passage. The New Testament contains no fewer than ten literal quotations from the fifteen verses between Isaiah 52:13 and 53:12 and more than thirty allusions to the passage. Luke’s story of Philip and the Ethiopian testifies to the central place of this Isaian prophecy in early Christian preaching (Acts 8:32-33).

According to Mark, Jesus himself testified to the identification of the Messiah with the redemptive Sufferer in Isaiah 53. Not only does Mark trace this testimony to Jesus; he also places in a specific setting—the Last Supper—the solemn historical event that virtually defined what the early Christians called paradosis, “tradition.” In the Eucharistic institution Jesus invoked both Isaiah 53 and Exodus 24:8 with respect to the libation of his blood:

“This is my covenant blood, which is shed for many.”

Thus, proclaiming himself to be the Suffering Servant, he identified the Atonement blood as his own.

Since the entire theology of the Atonement rests squarely on this Eucharistic scene, it seems important to test—as best we can—the authority by which Mark ascribed to Jesus the identification of himself as the atoning sufferer in Isaiah 53. In this respect, let us bear in mind that Mark is not our earliest literary witness on this point; nearly a decade before the composition of Mark’s Gospel, Paul had written to the Corinthians on this very point, declaring that Jesus took

“the cup after supper, saying, ‘This cup is the new covenant in my blood.’”

Paul went on to complete this theology later in the same epistle by reminding the Corinthians,

If, as Paul testifies, this understanding of the Atonement pertained to the common deposit of the Christian tradition, is it possible to link this tradition to a specific name, a person whose witness on the matter rendered to it a particular and weighty authority? Neither Paul nor Mark, after all, was present at the Last Supper. Can we trace these words of Jesus to someone who was? Yes, we can.

It is useful to recall how the Gospel of Mark came to be included in the Apostolic corpus known as the New Testament. We need not guess on this point, because writers of the second and third centuries—the men able to testify to the formation of the New Testament canon—explained the matter: Mark wrote down the preaching of Peter; he was “the interpreter of Peter”—in Greek hermeneutes Petrou, in Latin interpres Petri. This designation of Mark by Papias of Hierapolis and Irenaeus of Lyons was repeated by the Roman Anti-Marcionite Prologue, dated between 160 and 180, which further testified that

“after the death of Peter himself, [Mark] recorded this present Gospel in the regions of Italy.”

Tertullian and Clement of Alexandria, in the next generation, further supported these testimonies.

By the year 200, then, we are dealing with an impressive, fairly uniform, and widespread consensus, which asserts that Mark wrote his Gospel at Rome, preserving the preaching of Peter.

On the basis of these witnesses, I submit that Peter served as Mark’s historical source. It was on Peter’s firsthand testimony that Mark confidently ascribed to Jesus the identification of himself with the atoning sufferer in Isaiah 53.

I propose to support this thesis by examining another work closely associated with the Church at Rome: The First Epistle of Peter.