A Day to Remember Our Fathers

For many evangelical Christians today, the only liturgical feast days are those of the American civil calendar. 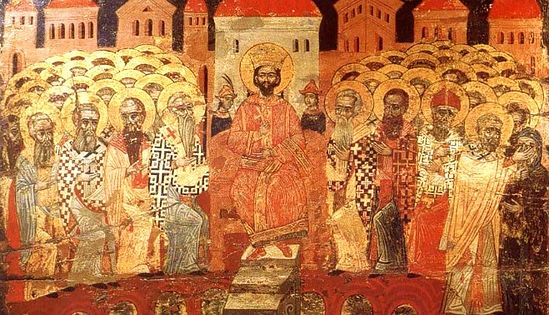 Mother’s day, Father’s day, and Independence day are given their own place of glory in certain churches, and some will even cancel worship services on Christmas day if it happens to fall on a Sunday. While today is the American celebration of Father’s day, it is more importantly the day we commemorate the holy fathers of the First Ecumenical Council, or the first Council of Nicaea in the year 325.

The Council of Nicaea is often the victim of ridicule and historical revisionism. From the grammatical nightmares of Dan Brown novels to the revisionist and anti-ecclesial speculations of Protestant or non-Christian historians, it has certainly become a whipping boy of early Christian history.

The problem with many of the critiques of this council is that they are based upon both faithless skepticism and a de-incarnational ecclesiology. Skepticism regarding both the promises of Christ and the work of the Holy Spirit, as well as a vision of the Church that would have both Arius and Athanasius be equally “fathers” of our one, true faith. There is no denying that these were tumultuous days for the Church, but the rise of heresy can never overthrow the Orthodox faith — and neither can it divide the Church. The rise of skepticism regarding this council would have the viewpoints of Arius and the Acacians be equally “Christian” as those of Athanasius; they would have any other, random creed be equally important as the Nicene.

Heresies will arise, but there can never be a true division in the Body of Christ. The Orthodox faith will ever prevail, no matter the circumstances — even if it rests upon the shoulders of a small group or a single individual (as was the case with both Ss. Athanasius of Alexandria and Mark of Ephesus in the fifteenth century). God will always preserve a remnant that refuses to bend the knee towards Ba’al. Those who left the Church were never of the Church, as the beloved apostle writes (1 John 2:19); an ontological division of the Church has never occurred, and Arius was never a Church Father.

At the vespers for this feast, our hymns explain its theological significance:

Arius fell into the precipice of sin, having shut his eyes so as not to see the light, and he was ripped asunder by a divine hook so that with his entrails he forcibly emptied out all his essence and his soul, and was named another Judas, both for his ideas and the manner of his death. But the Council in Nicea loudly proclaimed you, Lord, to be Son of God, equal in rank with the Father and the Spirit.

Arius the insane cut the Monarchy of the All-holy Trinity into three dissimilar and unrelated Essences; therefore the Godbearing Fathers eagerly came together, burning with zeal, like Elias the Thesbite, and cut off with the sword of the Spirit the blasphemer with his teachings of shame, as the Spirit decreed.

Pentecostarion, Translated from the Greek by Archimandrite Ephrem

Another emphasis of this feast is that our faith itself rests upon the shoulders of our fathers.

The festal readings from Deuteronomy remind us that God is faithful to the promises he makes to not only our fathers, but also to those of us who faithfully come after them (Deut. 1:8-11,15-17). We are blessed because God has blessed our fathers (Deut. 10:14-18,20-21). There are no loner Christians, and the blessings of God are only fully realized in community. We would not be Christians today were it not for those who have lived, fought, and died for the faith before us. Interestingly enough, the reading from Genesis shows that the 318 bishops of Nicaea are analogous to the 318 servants of Abraham (Gen. 14:14-20).

The fathers of Nicaea have delivered us from error, sheltering us in the true faith of Christ. We should always remember them rightly and with honor, knowing that none of us would be Christians today — worshipping Christ as one of the Holy Trinity — without their efforts. We should ever be mindful of their continued intercessions for the Orthodox Church.

Therefore, let us rightly honor our fathers, knowing they have faithfully paved the royal pathway that sets out before us, so we can “guard our life unsullied in the faith.”

Let us praise today the mystical trumpets of the Spirit, the Godbearing Fathers, who sang a harmonious melody of theology in the midst of the Church: one Trinity, unchanging Essence and Godhead; the overthrowers of Arius, the champions of the Orthodox, who ever intercede with the Lord that he have mercy on our souls.