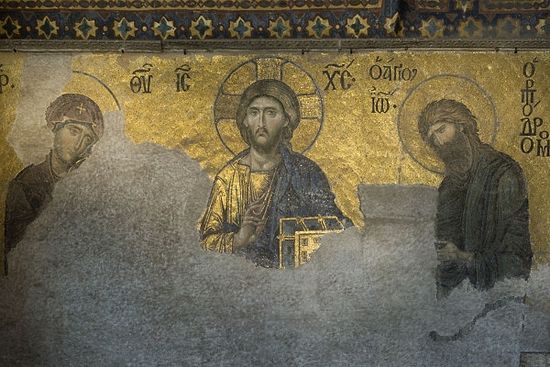 The Deësis mosaic at Hagia Sophia

What you got ain’t nothin’ new … You can’t stop what’s coming; it ain’t all waitin’ on you. That’s vanity.

No Country for Old Men

When a person is received into the Orthodox-Catholic Church, it can be a temptation to transition from enlightened one to enlightener; a delusion that nudges one from being a humble and unworthy recipient of Christ to that of the Teacher himself, ready to defend the Church and Her dogmas to the bitter end (and at any cost). In some instances, the high cost of this vanity is the loss of friends or even family, but, many more times than I’d care to recollect, this delusion leads to a loss of one’s soul as they scrutinize themselves out of the Body of Christ and into a fantasy-church of their own making.

Now, I fully admit that my zeal has outweighed my sense (or discernment) at many times in my life, as I’m often prone to obsession over particularities (suffering, as I do, from bouts of OCD). As such, this is not a “holier than thou” diatribe or an effort to “call out” or judge any one particular individual; such things are best left to Christ alone. Instead, this is my attempt at passing on some helpful truths that I have learned from the Scriptures, Fathers and other Orthodox people in my life, so as to hopefully benefit others.

That said, I have found that one of the best ways to combat this form of zealous delusion — that the entire Church is dependent upon you and your rallying cry of rebellion against “compromised” bishops and presbyters — is to both understand and experience more fully the Person of Jesus Christ. Not only should our personal relationships be modeled after the inter-communion of the all-Holy Trinity, but also our relationship with those in the Church is intimately dependent upon understanding who Christ is, since we are His Body. And the path of this experience is one that is marked by prayer, asceticism, and humility, and not merely knowledge, for “Knowledge makes arrogant, but love builds up. But anyone who thinks that he knows anything does not yet know as he should know” (1 Cor. 8:1-2).

I don’t know about anyone else, but I sometimes find myself losing sight of reality when it comes to “symbolism.” For example, we will say that the Church is the “Body of Christ” (Rom. 7:4; 1 Cor. 10:16; Eph. 4:12), and will simply use this for a variety of illustrations or moralistic precepts. However, this is not a mere metaphor, but is rather a true and significant reality. In the Church, we are actually — both individually and collectively (1 Cor. 12:27) — the Body of Christ. As a result, knowing the Person of Jesus Christ is essential if one can hope to truly “understand” the Church, since we, as the Church, are His very Body.

In the fifth century, there lived an archimandrite (the “head monk” of a monastic community) near the city of Constantinople named Eutyches. A fervent opponent of the condemned heresy of Nestorianism, Eutyches brought his denouncements of Nestorianism to an unfortunate and opposite extreme, claiming that our Lord Jesus Christ had only one Nature after the Incarnation.

In other words, he believed that Christ’s Human Nature was “merged” with that of his Divine, leaving both one Nature and one Person in Christ. Eutyches was condemned as a heretic and exiled from the Roman empire after the ecumenical Council of Chalcedon (AD 451) ruled against this quick-spreading heresy, now known as Monophysitism (meaning “single nature”). By claiming that Christ had but one Nature (or “Essence”), Eutyches and his followers were saying that the Incarnate Christ was “a fusion of human and divine elements.” As far as Christ’s Human Nature, Eutyches said that it ”dissolved like a drop of honey in the sea.” 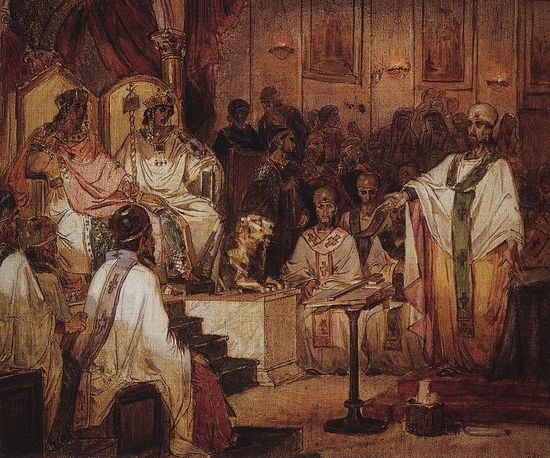 Were Eutyches correct in his teaching, this understanding of the Person of Christ would have had a significant impact on all other disciplines of theology; including, most especially, that of Ecclesiology. If Christ is a “fusion” or mixture of both the Divine and Human — a place where the two Natures intermingle with one another, leading to the dissolution of distinction, or confusion, between them both — then the Church, as the Body of Christ, would be the same also.

However, as Chalcedonian, Orthodox-Catholic Christians, we know that this is not the case.

Instead, the Church is a Divine-Human Mystery of Christ, just as Jesus Christ Himself is the true God-Man: a single Person with two Natures that are neither completely separate nor confused into one. Of this, the recent Saint of Serbia writes:

The flow of history confirms the reality of the Gospel: the Church is filled to overflowing with sinners. Does their presence in the Church reduce, violate, or destroy her sanctity? Not in the least! For her Head—the Lord Christ, and her Soul—the Holy Spirit, and her divine teaching, her mysteries, and her virtues, are indissolubly and immutably holy.

Here, St Justin is using the same terms we can find applied to Christ’s two Natures in ecumenical deliberations: indissoluble and immutable. The Church is a true, theanthropic (“Divine-Human”) Mystery of the God-Man Jesus Christ; but just as Christ’s Divine and Human natures are neither confused nor completely separate, the same can be said of the Church: The Church is the true Body of Christ, both Divine and Human, but the Divinity is not confused with the Humanity, nor are the two completely separate.

In the Scriptures and in the very life of the Church itself, we have a promise from Jesus Christ that he would never leave us (St. Matt. 28:18-20; Heb. 13:5), that the Spirit would lead us into all truth (St. John 16:13), that the gates of hades will never prevail against the Church (St. Matt. 16:18), that we will be a Bride that is spotless and without blemish (Eph. 5:27; Col. 1:22), and so on. The vanity that says the purity and salvation of the Church is wholly dependent upon me is not only delusional, it is a denial of the very promises of God; if anything, it is dependent upon all of us together, in cooperation with the Spirit. Alongside this, it denies Chalcedonian Orthodoxy, suggesting that there is a “fusion” between the Divine and Human, leading to a fear that one could eliminate the other; something that our Church declares to be an impossibility.

One example that I believe bears weight is the Arian controversy; a heresy that was dominant throughout many areas of the Roman empire (and the Christian Church as a whole) from the end of the 3rd century until the latter parts of the 6th century among the Visigoths. Here is an example of a prevailing heresy that plagued the Church for many generations, far longer than anyone reading this blog could ever dream of living. If we put the hope and surety of the Church on our individual shoulders, being deluded by both vanity and a sinful self-importance, can you imagine how such a person would’ve felt during these times? We could have lived under an Arian bishop for an entire lifetime, never knowing anything different.

Did this destroy the Orthodox-Catholic Church? Was this an insurmountable hurdle towards a pure and undefiled Faith? Or did the promise of Christ endure and the Orthodoxy of the apostles and their inheritance prevail?

While the preservation of the dogmas and canons of our faith is certainly dependent upon our bishops and presbyters (e.g. 2 Tim. 3:10-4:5) — and we as laypeople must carefully, and with all humility, hold each other accountable as preservers of true Orthodoxy — the sanctity and triumph of our Church and Her Faith of Jesus Christ is not entirely dependent upon any one individual. To put it another way, none of us are that important; we are all in this together, and a large part of the preservation of Orthodoxy begins with the virtues of prayer, asceticism, and humility; with great long-suffering and with sacrificial love for one another in the Body of Christ.

There is a way that we can live as if the purity of the Church depends on us individually, but the way we should do this is by focusing on ourselves, and not on others and their mistakes. We should be consumed with fixing ourselves and not the Church as a whole. If we can “acquire the Spirit of peace, a thousand souls around [us] will be saved” (Saint Seraphim of Sarov). I think that if one can truly do this, they will find that it is a far more incredible goal to save themselves than it is to save the entire Church; and if we’re all engaged in this task, the purity of the Church will ever remain inviolate, in fulfillment of the promises of Christ. 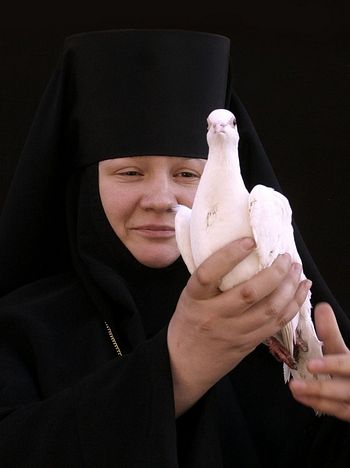 Michael Seraphim29 июля 2015, 21:00
But the Definitions of the Orthodox Faith do all of us good, and nobody has asked you, because it is not your private interpretation that matters, but the Doctrine of the God-Bearing Fathers and Saints.

Melania Martins27 июля 2015, 21:00
I truly find it tremendously sad there can be such differences between Christians of wording for the defining of the body of Christ. We should stand on what the Bible verses tell us, he is God's Son who came in the flesh so we may have God with us. Anytime there is a discussion among Christians, there is always an argument on this topic, it seems. Even the protestants find offense in the Orthodox words of defining Christ's body. Christ was born here of a virgin, and was risen from the dead. He is now in Heaven. Does it get any plainer than this? We should work on unifying our Churches rather than going down the slippery slope of putting Christ's body in our mind's microscopes and coming up with definitions that do no one any good, especially God's purposes. We should be one Church, and not divided. I have spoken with Coptic Orthodox members before, and it seems they believe Christ's body was fully human and fully God, too. This is nothing more than a misunderstanding between languages, if you ask me. I pray to God this endless arguing ceases, and we get on with the fullness of the faith, and showing the world we are True Christians.