The Exaltation of the Cross 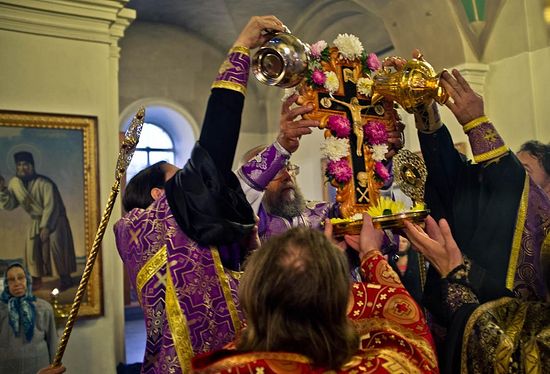 In the Holy Church we have twelve "master" feasts, which include Easter, Pentecost, Christmas, and Epiphany, so named because they are related to the Master, while the remaining feasts belong to the saints. The feast of the Exaltation of the Cross is an occasion where we reconfirm that we have inherited the victory of Christ — we became victors with Him. We express our faith in the Crucified in various manners. Liturgically, Wednesdays and Fridays are dedicated to the remembrance of the Cross. The Great Lent projects upon us the light of the Cross as the place where Jesus revealed His victory over death.

Jehovah's Witnesses try to mock us, saying that we carry the weapon that killed Jesus. They argue saying: "Does anyone keep the pistol that killed his dear friend?" We simply answer that the death-weapon that killed the Master is our way to life. The Cross is our Joy. Jehovah's Witnesses repeat the same errors of Jews and Gentiles in the past when Paul the Apostle opposed them using the concept of the Cross, saying: "For the message of the Cross is foolishness to those who are perishing, but to us who are being saved it is the power of God … But we preach Christ crucified, to the Jews a stumbling block and to the Greek foolishness, but to those who are called, both Jews and Greeks, Christ the power of God and the wisdom of God." (1 Cor 1:18-24)

The Cross is our pride, by which we accept the death of the Master as the way to Resurrection for deliverance from all sin. The baptism which we undertook was described by Paul as the participation with the Lord in His burial and in the Resurrection: "Knowing this, that our old man was crucified with Him, that the body of sin might be done away with, that we should no longer be slaves of sin." (Rom 6:6) This is the center of our faith. This is our vitality. 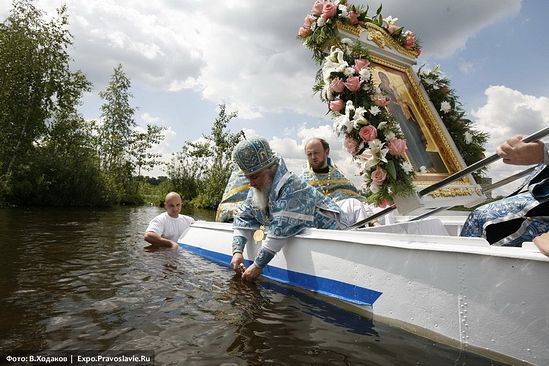 If we post the Cross on the top of the Iconostasis, we do so in order that the meaning of the New Life shall stand before us and elevate us to Jesus in heaven, that we may forget all earthly care. And if we make the sign of the Cross over the baptismal water, we do it in order that the power of Salvation may descend upon the baptized through the water he is being washed with. In our Church, every symbol has its own meaning. When we Cross ourselves, we ask the Lord to send down upon us the power of Salvation as pictured in this symbol.

Likewise, if we wear a Cross around our neck since baptism, we confirm our Christian faith and that we are attached to Jesus. Some may wear a golden Cross, which at times becomes fashionable. This could have a much deeper meaning if the wearer held fast to chastity. Let us move from visible decorations to internal decoration and have the Cross carved in our hearts too.

When we Cross ourselves over the face, chest and shoulders, let us feel the connection with the Crucified. We do this every time the name of the Trinity is mentioned or glorified in prayers because the Trinity decided to allow the death of the Son in our days from all eternity. The true Glory descends upon us through the death of the Savior and through our faith in Him.

This is our pride and power. This is what the martyrs have delivered to us. 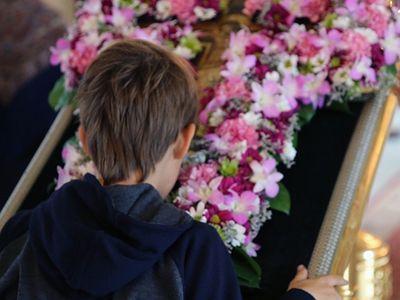 The Carrying of our Cross Means Acquiring the Holy Spirit
Leave-taking of the Exaltation of the Cross—September 21/October 4
Archbishop Meletiy of Chernovitsy
In 2009, His Grace Bishop Meletiy of Khotin, Ukraine, now Archbishop of Chernovitsy, visited the St. George Church (ROCOR) in Howell, NJ. At the Divine Liturgy for the Leave-taking of the Feast of the Exaltation of the Cross, His Grace gave a sermon. 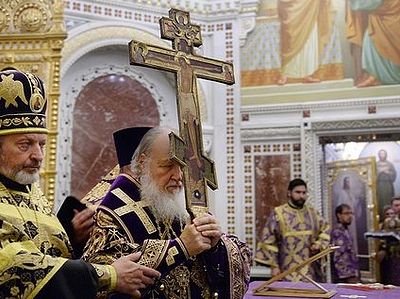 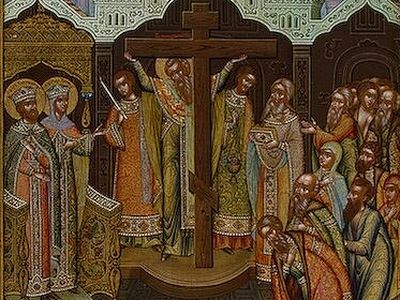 The Cross reveals God’s mercy and grace
At the very heart of the Gospel is the Cross of the Lord, and this is what Saint Paul is not ashamed of. Thus, whenever we commemorate the Cross, we are reminded of this and of the profound words we hear at every Liturgy after we commune with the Lord: “...for through the Cross, joy has come into the world.”