Saint Ninian of Whithorn, Apostle of the Southern Picts, Wonderworker 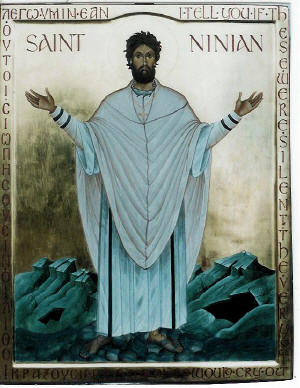 Saint Ninian (Ninia), a Briton by origin, is one of the most venerated saints of Scotland. He is commemorated as “Apostle of the Southern Picts.” Although few details of the life and activities of St. Ninian are known, in addition to ancient traditions several early written pieces of evidence about the saint have survived. Our great authority, the Venerable Bede mentions St. Ninian in his Ecclesiastical History of the English People (731). In the ninth century, an anonymous author wrote an account of St. Ninian’s miracles. Ailred of Rievaulx in the twelfth century and the Irish archbishop James Usher of Armagh early in the seventeenth century wrote about St. Ninian as well.

The future saint was most probably born in the second half of the fourth century—perhaps in about 360. He belonged to the so-called “Roman-British” tradition of early British Christianity. His native land was most likely Cumbria; at least it is nearly certain that he was born south of Hadrian’s Wall in today’s northern England. His father, according to some sources, was a local Christian ruler. While still very young, St. Ninian very clearly began to feel a calling to Christianize his native country. According to tradition, after the saint went to study in Rome, he then visited Gaul where at his monastery in Tours he met St. Martin—a great missionary and father of monasticism of Gaul. There is an opinion that St. Ninian was consecrated bishop either in Rome or Gaul (and, if the latter, the consecration was probably performed by St. Martin himself). 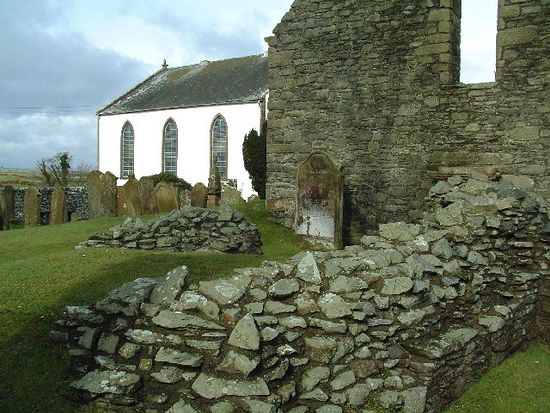 Inspired by St. Martin’s example, in about 394 St. Ninian returned to Scotland where he made the Whithorn peninsula in the present-day region of Dumfries and Galloway (south-western Scotland) the centre of his missionary activities. From here the hierarch successfully preached to the Southern Picts and converted many of them to Christ. He obviously preached to Irish settlers in Scotland as well and his work among them was fruitful. There is no doubt that St. Ninian established his see at Whithorn and also founded a church and a monastery dedicating it to St. Martin. Historians suppose that it was St. Martin who sent skilled masons from Gaul to help Ninian build the church at Whithorn. Whithorn derives its name from the main monastery church whose walls had been built of stone covered with lime plaster, which was a great rarity in Britain at that time. The very name “Whithorn” can be translated as “lime washed church”, or “white house”, and throughout the medieval period this splendid church together with the whole diocese was known as “Candida Casa” (“white house” in Latin). The church was built in a Roman fashion and according to the best standards of the time. 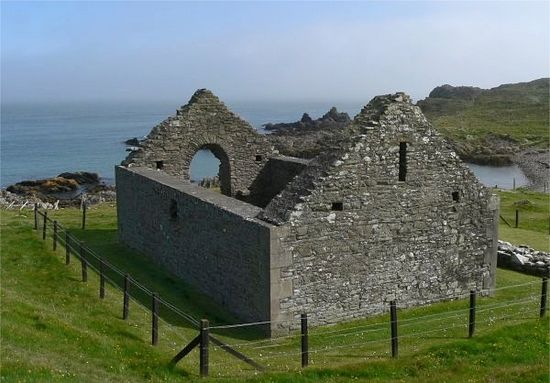 The monastery founded by St. Ninian became a famous missionary and monastic centre. He and his disciples evangelized the Southern Picts and Northern Britons. Some traditions say that St. Ninian’s disciples extended the mission to Scotland in general, which is testified by a large number of churches dedicated to him there and at least three in northern England. St. Ninian, a renowned ascetic and man of prayer, used to live alone in solitude in a cave for prayer; Whithorn indeed played an important role in the development of Orthodoxy in Britain, along with Iona and Lindisfarne. St. Ninian was probably the first Bishop of Galloway. During his life St. Ninian worked many miracles, which continued through his prayers after his death in the first half of the fifth century, probably in 432. 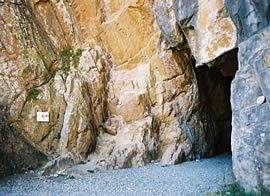 St. Ninian's cave on Whithorn.
Some believe that shortly before his repose St. Ninian may have moved from Scotland to Ireland and died there, though there is no evidence to confirm this. According to a legend, at the moment of St. Ninian’s repose, a bell began to ring by itself, announcing the death of the righteous man and calling everybody to his deathbed. St. Ninian was buried in a stone coffin near the altar of the church that he had built on Whithorn. Pilgrims flocked to his relics up to the sixteenth century Reformation. 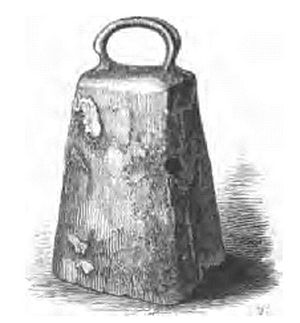 St. Ninian's bell.
The Whithorn monastery had close connections with Mediterranean countries. Its monks were famous for their learning and severity of ascetic life, adopted by them from the Christian East. It was Whithorn where there studied many future missionaries, now venerated in different parts of Scotland. Today Orthodox, Catholic and other Christian pilgrims visit Whithorn on a par with other important early Christian shrines in northern Britain. The cave where Ninian used to pray and (possibly) the saint’s personal bell have survived. The cave is located on the east side of the peninsula. It is a truly peaceful, quiet place in idyllic surroundings, and all Christians who visit it feel the holy bishop’s presence there to this day. A very ancient settlement, now a district within the city of Stirling in central Scotland, is called St Ninians in honour of the saint. 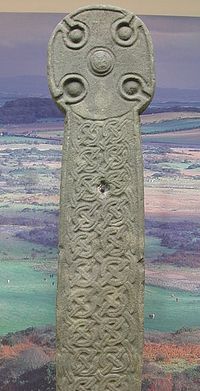 St. Ninian's cross.
Excavations carried out on Whithorn in recent times have confirmed the authenticity of the ancient traditions concerning St. Ninian (this is true for many other early Christian sites in the British Isles as well). Specifically, the remains of a very ancient circular church were discovered, and its walls had indeed been whitewashed. Ancient inscribed Christian gravestones as well as very small wattle houses were discovered near the church, which indicates that a monastic community had existed here in the Celtic period. Supposedly, the monastery had more than one church and it definitely had a school. Though it is impossible to ascertain whether this monastery was dedicated to St. Martin or not, it was believed that the monastery kept a portion of his relics. Later, such was the fame of St. Ninian that his veneration spread to Kent and to Denmark. Today he is even venerated in the Nova Scotia province of eastern Canada. 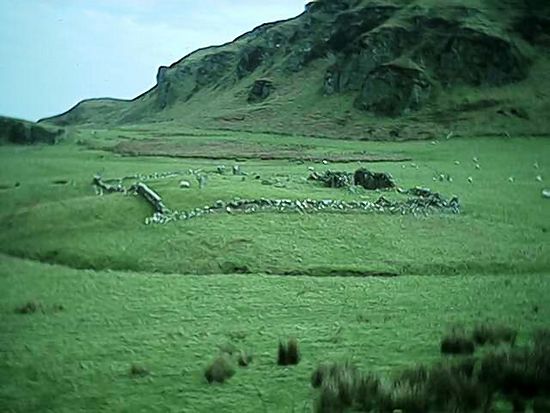 Chapel ruins and a cemetery on Sanda Island.

Numerous parish churches and chapels dedicated to St. Ninian or associated with him are scattered all over southern Scotland. Nearly all of them are more than 1000 years old. Some of them were founded by the saint himself and later partly rebuilt, others were founded by his disciples, who spread the Gospel to the north, west and other parts of the country. One of the greatest disciples of St. Ninian was St. Kentigern. Notably, most of the surviving medieval churches dedicated to St. Ninian are situated to the south of the Firth of Forth and the Firth of Clyde estuaries, on Orkney (where he is widely venerated), Shetland (of which he is a patron-saint) islands as well as on the Isle of Man, on the island of Bute and on the island of Sanda in the Faeroes. Ruins of the chapel built by St. Ninian as well as early crosses and a holy well have survived on this island. Local legends relate that the holy bishop is buried on Sanda and that his grave can still allegedly be found here—under an old alder tree. True, this is just a legend, but Sanda originally belonged to the Whithorn Monastery and had close links with its community. St. Ninian’s disciples also erected a chapel on the isle known as “St. Ninian’s Isle” after him; this is in Shetland, and the ruins of a twelfth century chapel survive there to this day. 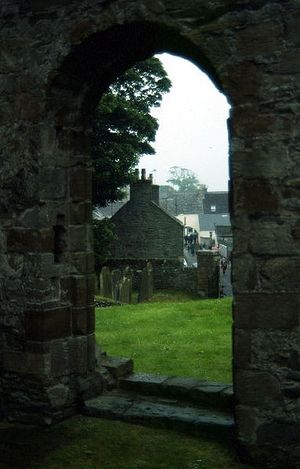 St. Ninian's priory ruins, Whithorn.
The Whithorn peninsula is considered to be the main site of the veneration of St. Ninian to this day. Here visitors today can see ruins of the late medieval Roman Catholic priory, including its nave, vault and the very site where the shrine with St. Ninian’s relics used to stand. The museum on Whithorn houses a large collection of interesting artefacts discovered here during the recent excavations. In addition to the priory ruins, the parish church, cave and other ancient monuments, the peninsula also has another museum which exhibits a considerable number of ancient Celtic crosses, the oldest of them dating back to the fifth century. A thirteenth century chapel dedicated to St. Ninian has partly survived not far away, though it is now roofless. 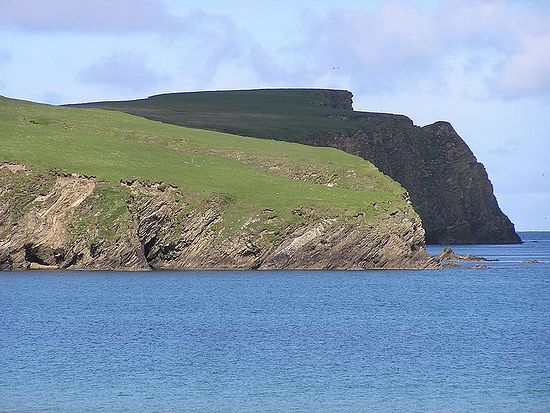 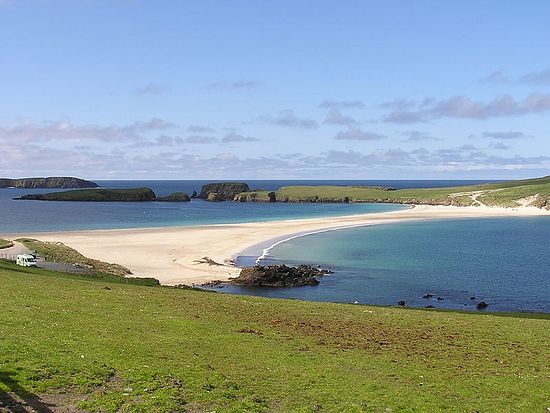 Nowadays Orthodox Christians call St. Ninian “Apostle of the Southern Picts” for his many years of fruitful work for the evangelization of Scotland.

Holy Father Ninian, Bishop of the Southern Picts, pray to God for us! 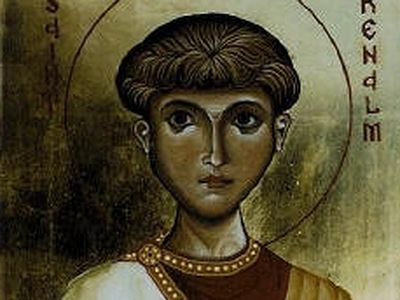 Saint Kenelm of Mercia, Prince and Passion-Bearer
Commemorated July17/30
Dmitry Lapa
The boy related his dream to his old and wise nanny Wolweline. The latter wept very bitterly, realizing that the boy was to be martyred very soon and that unrighteous people were to seize power in the kingdom. But at the same time she rejoiced as Kenelm was to dwell among the saints.

Holy Hierarch David, Patron Saint of Wales
Commemorated: March1/14
Dmitry Lapa
The abbot led the same simple life as his monks and worked as hard as any of them. All the community members wore simple clothes and all their belongings were held in common. Voluntary poverty and the refusal of all possessions were among the main rules of the monastery. St. David himself, like many other Celtic saints, used to retreat to the river to read the whole Psalter, standing in cold river water even in winter.

Holy Hierarch Kentigern (Mungo) of Strathclyde, Bishop of Glasgow, Wonderworker
Commemorated January 13/26
Dmitry Lapa
St. Kentigern was much loved and venerated by the people for his gift of working miracles. Once he brought back to life a tame robin of St. Serf, which had been killed by jealous monks. Another time he miraculously lit a fire in St. Serf's monastery, which had earlier gone out.
Комментарии

Laura remmy17 сентября 2016, 15:00
Thank you for this wonderful article about Saint ninian! I had ever heard of him before. Is there a historical novel about him or referring to him, do you know? Thank you and God bless you!