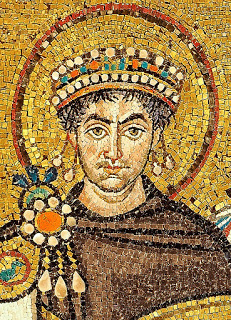 One of the most spectacular features of Justinian's reign was the recovery of large stretches of land around the Western Mediterranean basin that had slipped out of Imperial control in the 5th century. As a Christian Roman emperor, Justinian considered it his divine duty to restore the Roman Empire to its ancient boundaries. Although he never personally took part in military campaigns, he boasted of his successes in the prefaces to his laws and had them commemorated in art. The re-conquests were in large part carried out by his general Belisarius. 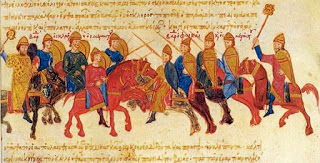 In 978 Bardas was delivered from his prison cell by the eunuch Basil Lekapenos, Basil II's uncle and de facto regent. He was dispatched in disguise to his native Cappadocia to stir up the local aristocracy against Skleros, who had revolted against imperial authorities and advanced to the Hellespont. Despite several initial setbacks, and with the assistance of a Georgian army led by Tornikios, Phokas eventually suppressed the revolt, gaining victory in single combat with Skleros. For his vital services to the crown, he was rewarded with a coveted office of Domestic of the Scholae and at once led the Byzantine armies to reconquer Aleppo from the Saracens. Later, to quote Psellos, "he was given the privilege of a triumph and took his place among the personal friends of his sovereign." 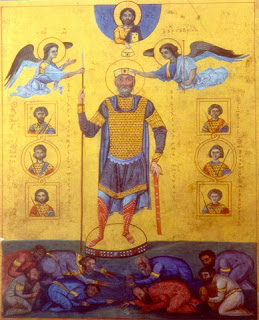 In 987/8, a seven-year truce was signed with the Fatimids, stipulating an exchange of prisoners, the recognition of the Byzantine emperor as protector of the Christians under Fatimid rule and of the Fatimid Caliph as protector of the Muslims under Byzantine control, and the replacement of the name of the Abbasid Caliph by that of the Fatimid Caliph in the Friday prayer in the mosque of Constantinople.[12][13] Nevertheless, in 991 the Fatimids launched a campaign against the Hamdanid Emirate of Aleppo, a Byzantine protectorate, perhaps in the belief that Byzantium would not interfere. Under the governor of Damascus, Manjutakin, the Fatimids scored a series of successes against the Hamdanids and their Byzantine allies, including a major victory at the Battle of the Orontes against the doux of Antioch, Michael Bourtzes, in September 994. Bourtzes' defeat forced Basil to intervene personally in the East: in a lightning campaign he rode with his army through Asia Minor in sixteen days and reached Aleppo in April 995, forcing the Fatimid army to retreat without giving battle. The Byzantines besieged Tripolis unsuccessfully and occupied Tartus, which they refortified and garrisoned with Armenian troops. The Fatimid caliph al-Aziz now prepared to take the field in person against the Byzantines and initiated large-scale preparations, but they were cut short upon his death. 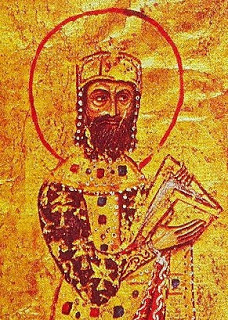 Alexios was Byzantine emperor from 1081 to 1118. Although he was not the founder of the Komnenian dynasty, it was during his reign that the Komnenos family came to full power. Inheriting a collapsing empire and faced with constant warfare during his reign against both the Seljuq Turks in Asia Minor and the Normans in the western Balkans, Alexios was able to curb the Byzantine decline and begin the military, financial, and territorial recovery known as the Komnenian restoration. The basis for this recovery were various reforms initiated by Alexios. His appeals to Western Europe for help against the Turks were also the catalyst that likely contributed to the convoking of the Crusades. 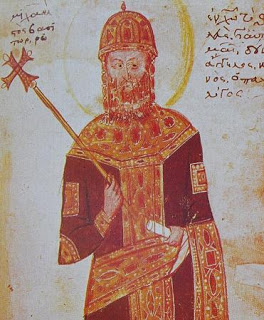