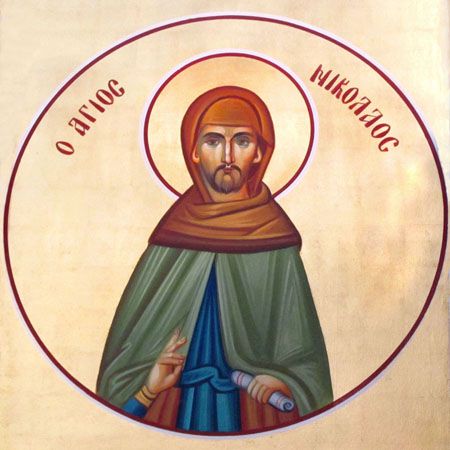 You received a trophy of victory Nicholas,
Contesting steadfastly for Christ all-blessed one.

Saint Nicholas born into the pious family of Petros and Stamato in the village of Karyes on the island of Chios. From childhood, he cultivated all the holy virtues. When he was twenty his parents died, and he set off with a companion to seek his fortune as a stone-mason in Magnesia. But an accident or illness there deprived him of his reason and transformed his natural simplicity and meekness into idiocy, so that he was incapable of answering for himself for what he did.

Local Turks saw the young man's vulnerable situation as a chance to convert him to Islam, so they brought him before the judge. But since Nicholas was unable to make a response on his own, they sent him unharmed to his sister in Chios where she looked after him. However, in Magnesia a rumor spread that he denied his faith, changed his name and embraced Islam. This was told to his sister, and instead of keeping silent she spread the news, which came to the Turkish authorities. For this reason they dressed him in Turkish clothing and called him Mehmed, though they did not circumcise him. Unable to earn a living as a Muslim, he resorted to tending sheep. While the poor young man was keeping watch over the flocks, he met a monk named Cyril, who took pity on him and decided to do his best to bring him back to his right mind.

One night, as Nicholas was asleep in an abandoned church, he saw a beautiful maiden in a dream who told him he was healed. With his reason completely restored, the monk Cyril instructed him in the faith. This inflamed the heart of Nicholas to repent, although he was innocent of the rumor ascribed to him. Renouncing all physical comforts, he attended only to prayer, fasting, vigils and countless prostrations, to the point that those around him became concerned for him. One day, as he venerated the icon of the Beheading of Saint John the Forerunner and Baptist, he was seized by the desire to emulate him and accomplish his repentance by martyrdom. He wept as he kissed the icon of the Holy Forerunner, begging him to make him worthy of following after him for the love of Christ. 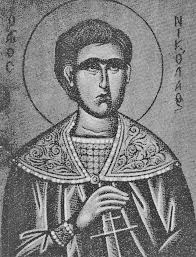 Some time later Nicholas entered a church, and he was driven out by the Christians, who felt no compassion for the dumb Turk everyone knew, so he went home and wept inconsolably. The villagers, specifically two men and a priest, soon seized him as one wanted by the Turks, so they brought him before the judge. When he was questioned he affirmed with complete confidence: "I was born a Christian, I was raised a Christian; I have never denied Christ for Islam and I never will deny Him, but I will die a Christian." This embarrassed the Turks, so he was tortured and the villagers were arrested, fearing for their lives. "How long are you going to make us put up with this misery?" the cowardly priest of the village shouted at the blood-soaked martyr. "Convert Turk and they'll let you go and us too. The Christian faith isn't going to be weakened because of one man!" These words filled Nicholas with contempt, so he struck the priest in the face and said: "You call yourself a priest of God and you urge me to deny my faith, instead of exhorting me to keep it until death!"

In the days that followed they used the most painful tortures they could devise in order to break the young man's resolve, but the grace of God was with him and enabled him to endure everything cheerfully. Covered in bruises he was thrown into the stables to be trampled by the horses; but, as with Daniel in the lion's den, the beasts showed themselves kinder than men and did Nicholas no harm. During all his torments, Nicholas kept a strict fast, in order to gain the reward of ascesis together with martyrdom.

After thirty days, Nicholas was sentenced to be beheaded, like his beloved Holy Forerunner. However, when brought to the place of execution, he was not immediately put to death, but they waited while he was on his knees with a dagger wounding his back, in order to either make him suffer more or to wait for a last minute conversion. Yet, this only increased his desire to die for Christ. Then the executioner slightly cut the back of his neck, but this did not weaken his resolve. After two attempts to behead him, the executioner was unable to accomplish the deed, so he took Nicholas by the hair and slit his throat like they do with animals.

A thick darkness fell upon Chios, that completely bewildered the inhabitants of the island. Only the countenance of the holy Martyr shone with a brilliance that could not be hid. It was then decided by the Turks to burn his body and thus dispose of the miracle, but this only allowed his body to give off a beautiful fragrance, revealing to all the eternal glory prepared for those who have fought the good fight, finished the course and kept the faith (2 Tim. 4:2). This took place on October 31, 1754. 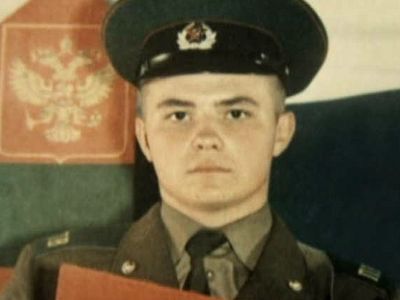 "Zhenya's cross has been in Syria, in Donbass, in Crimea ..."
Nikita Filatov, Lyubov Vasilievna Rodionova

"Zhenya's cross has been in Syria, in Donbass, in Crimea ..."
A conversation with Lyubov Vasilievna Rodionova—the mother of soldier-martyr Evgeny Rodionov
Nikita Filatov, Lyubov Vasilievna Rodionova
Twenty years ago a martyric death for the faith claimed a soldier of the Russian border guards, Evgeny Rodionov: he was killed on May 23, 1996 by militants near the village of Bamut in Chechnya for refusing to remove his cross and convert to Islam. And before that he endured a long captivity and cruel tortures … On the anniversary of the murder of Evgeny the Warrior, remembering him and his mother’s search for her son, we spoke with her about responsibility, the indifference of the local politicians, military honor, and remembrances of him. 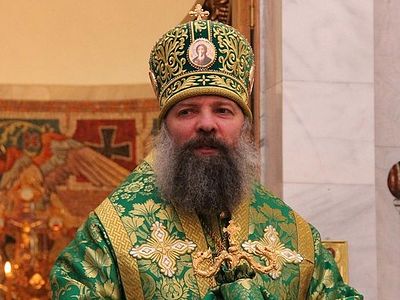 The Folly of Comfortable Christianity
A conversation with Bishop Pitirim of Dushanbe and Tadjikistan
On diluted Christianity, the rapid spread of Islamization, new “European values”, hatred for true Christianity, and where it all may lead. 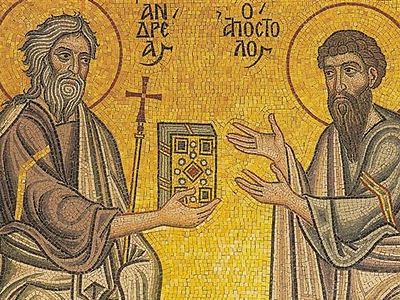 The Greek Orthodox Church under Ottoman rule
Huntington could have been writing about the churches today, for little has changed over the more than 90 years that have passed.
Комментарии