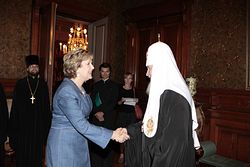 On 8 September 2010, His Holiness Patriarch Kirill of Moscow and All Russia met with the President of the Republic of Ireland, Her Excellency Mary McAleese. The meeting took place at the Patriarch’s working residence on Chisty side street.

The Russian Orthodox Church was represented by hegumen Philipp (Ryabykh), deputy chairman of the Moscow Patriarchate’s Department for External Church Relations (DECR); Rev. Sergiy Zvonarev, DECR secretary for far abroad countries; and a staff member of the same secretariat Miguel Palasio. Taking part in the meeting was H.E. Mikhail Ye. Timoshkin, Ambassador Extraordinary and Plenipotentiary of the Russian Federation to Ireland. Ireland was represented by the President’s husband Mr. Martin McAleese, H.E. Philip McDonagh, Ambassador Extraordinary and Plenipotentiary of Ireland to Russia; Mr.Adrian O’Neill, Secretary-General to the President; Mr. Michael Forbes, Director for Russia at the Department of Foreign Affairs in Dublin.

“Along with spiritual tradition we have acquired the system of values, which exists at present and is closely connected with moral orientation of human persons. However, I see the unfortunate dangerous tendencies in the development of human civilization. This danger is in neglecting the moral nature of a human person. Modern philosophy underscores the meaning of human freedom and law. It is supposed that a free man, who abides the law, is a good man. This is a deep misapprehension. Being free, one can abide the law and be an awful man. The neglecting by modern society of the notion of personal and social morality exposes the development of human civilization to a great danger.”

His Holiness Patriarch Kirill believes that one of the Church’s tasks is to preserve moral principles in human life, both private and public. He called tendencies to oust religious principles from public domain dangerous. “We consider a withdrawal of religious life into families or individuals as erroneous. Sometimes it is explained by multicultural and multireligious context: all religions should be removed from the public domain not to offend any of them. The ‘Lautsi v. Italy” case about removing crucifixes from schools is a vivid example.

“We also live in a multireligious society. For instance, there is a considerable Muslim community in Russia. When I discuss this subject with the Russian and West European Muslims, I asked them whether they feel offended to see crucifixions in schools in a country with Christian tradition, where the majority profess Christianity. I have never heard a negative answer. When I ask, “Do you feel hurt by the word Christmas? Should it be replaced with X-mas?”, they do not understand what it is all about. Therefore, when people say that crosses or the word Christmas should be removed not to offend, for instance, the Muslims, this is a false argument that could be called Christianophobia.”

His Holiness Patriarch Kirill of Moscow and All Russia expressed his concern over the necessity to defend moral tradition of modern society: “I consider it very important to defend the institute of family that is based on Christian moral tradition that upholds the integrity of family. A removal of such a notion as “sin” from people’s consciousness would be very dangerous for the integrity of individuals and families. I see the same danger in the promotion and legalization of prostitution and homosexualism.” His Holiness called Ireland a country with a strong Christian tradition and added; “I believe it to be a very good spiritual basis for the development of relations between Russian and Ireland, since our common Christian heritage gives us grounds for greater trust and liking of each other.”

His Holiness Patriarch Kirill told H. E. Mary McAleese about the parishes of the Russian Orthodox Church in Ireland. “Many our compatriots live in Ireland. They have found themselves in Western Europe after the tragic events of 1917. As a matter of fact, there were several waves of emigration from the Soviet Union to the West in the 20th century; people have settled in West European countries, Ireland including. Mentioning these people, I mean not only the citizens of the Russian Federation, since the Moscow Patriarchate is the Church both for Russia and Ukraine, Belarus and Moldova. Many former citizens of the Soviet Union are living in Ireland, where we have five parishes, some very active, for instance in Dublin. I express my gratitude to the authorities of Ireland for their benevolent attitude to the presence of the Russian Orthodox Church in your country.” His Holiness emphasized that the Russian Orthodox Church has maintained good relations with the Catholic and Anglican Churches in Ireland, saying, “This gives us an opportunity to enjoy hospitality of these Churches, using their places of worship in case do not have our own there.”

The President of Ireland thanked His Holiness for welcome and for the chance to meet, as it is “the first ever visit by Irish President to Russia,” saying that it was important to talk about political, economic, and social dimensions as well as about cultural and spiritual ones. “You were quite right to point out that among the things we share is a remarkable common tradition, and as we grow out our contemporary relations, we have to explore our past to find the points of connection between us.”

The President spoke about the dialogue among religions in Ireland and emphasized that Ireland was a leader in interreligious dialogue. Christian Churches play an important part in public and political discourse. H.E. McAleese expressed her support to Patriarch Kirill in upholding spiritual and moral values. She remarked that in accordance with provisions of the constitution the state defends the institute of family and expressed her concern with lax morals of the modern youth. She added that Ireland protested against the exclusion of an article on Christian roots of Europe from the Lisbon Treaty.

His Holiness Patriarch Kirill informed the President of Ireland of the initiatives of the Russian Orthodox Church in developing interreligious dialogue in the world and said, “Ireland has reached a good level of ecumenical and interreligious relations, this being an important factor for upholding civil peace.” He spoke about experience of the Russian Orthodox Church in witnessing the Gospel in modern society and about the forms of missionary activities that allow to bring the Gospel values to our contemporaries and, first of all, to the young generation.

In conclusion of the meeting, the President of Ireland said that the work of the Orthodox parishes in Ireland has been recognized in public and church circles. The status and situation of the parishes of the Russian Orthodox Church were discussed.

His Holiness presented an icon of the Mother of God to H.E. Mary McAleese and wished “peace and prosperity to the people of Ireland, and to the President – spiritual and physical health, strength and God’s help in her noble and responsible ministry to her nation.” The President of Ireland presented a crystal Celtic cross to the Primate of the Russian Orthodox Church. 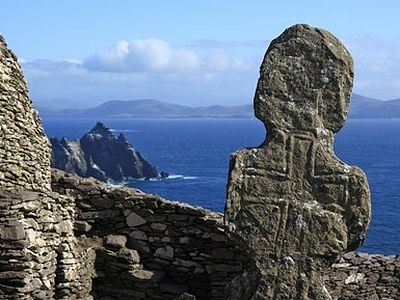 Orthodox Ireland Vladimir de Beer It is generally believed that St Patrick brought the Christian Faith to Ireland, his traditional title being Apostle of the Irish. Without wishing to diminish St Patrick’s importance in any way, it is relevant to point out that in 431 St Palladius was sent to Ireland by St Celestine I Pope of Rome, as the first bishop of the Emerald Isle, with the task of administering the sacraments ‘to the Irish who professed Christ’. There must therefore have been numbers of Christians in Ireland by the time St Patrick arrived in the following year. 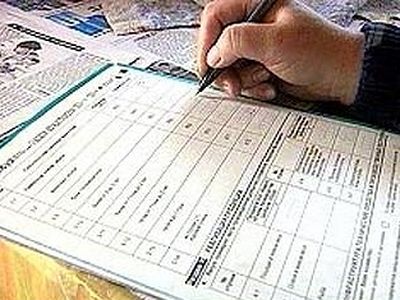 Number of Orthodox Christians in Ireland doubled over five years 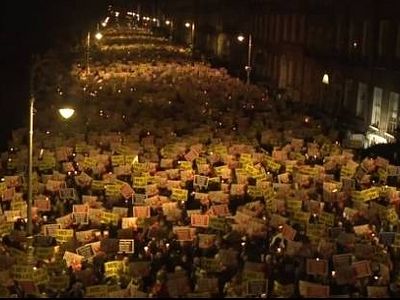