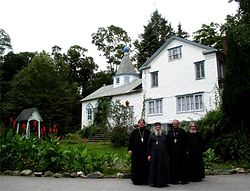 On December 2, 2010, the working group for the redevelopment of the New Kursk-Root Hermitage in Mahopac, NY, met, the official website of the Russian Orthodox Church Abroad reports. Efforts of the group are focused on the development of long-term plans for a spiritual/cultural/historical complex on the property of the Hermitage, currently under restoration.

The discussion acknowledged that work initiated during the summer of 2009 has served as a good base for this important project. In a spirit of cooperation, the group discussed a phased approach to broaden the effort initiated in the main building, to improve all structures, and to create architectural plans and drawings for further development. Addressing fundraising, the group spoke of a variety of approaches to donors and of identifying potential financial support.

The New Kursk Root Hermitage was founded on a rural property forty miles from New York, donated by the well known philanthropists, Prince and Princess Belosselsky-Belozersky for the purposes of sheltering the Kursk Root icon. The icon, now a symbol of the Russian Church Abroad, was brought in 1951 to the U.S.from Germany. The hermitage functioned at first as a Synodal podvorye, under the abbacy of Bishop Seraphim (Ivanov) of Chicago. The monastery housed a printing press, a bakery, and a hotel for pilgrims. On the lands are chapels, a pond, and a small Russian cemetery. The Kursk Root icon was later taken to the Synodal residence in New York City. The Hermitage did not endure as a monastery, and the property fell into disrepair. A fire in 1995 did further damage. In 2004 the property was re-established as a parish dedicated to the Nativity of the Mother of God. 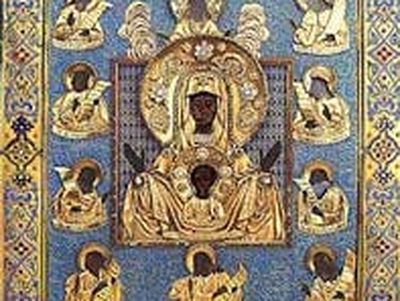 The Wonderworking Kursk Icon of the Mother of God "Of the Sign" Commemorated November 27/December 10 The frightened monastic brethren rushed immediately to the cathedral, where they beheld a scene of horrible devastation. The force of the blast had shattered the gilded canopy above the icon. The heavy marble base, constructed of several massive steps, had been jolted out of position and split into several pieces. A huge metal candlestick which stood before the icon and been blown to the opposite side of the cathedral. A door of cast iron located near the icon had been torn from its hinges and cast outside, where it smashed against a wall and caused a deep crack. All the windows in the cathedral and even those in the dome above were shattered. Amid the general devastation, the holy icon remained intact and even the glass within the frame remained whole. Thinking to destroy the icon, the anarchists had, on the contrary, become the cause of its greater glorification. 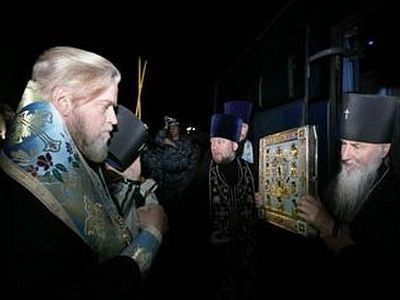 "The people opened up their souls!.." Interview by Zoya Gradov, Alamo, California.

"The people opened up their souls!.." Archbishop Kyrill (Dmitrieff), Zoya Gradov The icon had been subject to a safety inspection, photographed and registered with customs. But the customs officers were making the sign of the cross and venerating the icon - we were amazed by this. Those who grew up in the West couldn’t possibly imagine such a thing!
Комментарии
Войдите через FaceBook ВКонтакте Яндекс Mail.Ru Google или введите свои данные: