New Martyr Alexander Hotovitsky was in Portsmouth for 1905 treaty signing 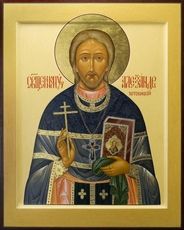 On Saturday, Dec. 4, the New England Language Center's International Gallery in Rochester unveiled a new icon of a Russian martyr, Father Alexander Hotovitsky, created by me, a local icon painter. The icon will be the featured piece at the center's annual Russian Christmas Bazaar with storytelling and background details about items on display and Russian folk traditions.

Father Hotovitsky has an interesting historical connection to the Seacoast of New Hampshire. On Sept. 5, 1905, in the jubilant aftermath of the signing in Portsmouth of the peace treaty ending the Russo-Japanese War, eight Russian Orthodox priests representing several U.S. cities had come to Portsmouth to participate in a service honoring the signing of the treaty. The group was led by Father Hotovitsky, the 33-year-old archpriest of St. Nicholas Church in New York.

In 1994, after the disintegration of the Soviet Union, the Holy Synod of the Church of Russia included Father Hotovitsky among the "new martyrs" of Russia and declared him a saint for his great service to the church, his outstanding missionary work spreading the faith in America, and his suffering and martyrdom at the hands of the Soviets. An official icon was created of Father Hotovitsky to honor his canonization.

On Sept. 5, 1905, in the jubilant aftermath of the signing of the peace treaty, the Russian delegation politely rejected all invitations to celebration parties and went directly to the Christ Episcopal Church for a unique ecumenical thanksgiving service arranged by the Reverend Brine. The entire Russian delegation attended. The Japanese were invited but did not attend. Every seat in the church was filled, and 2,000 others waited outside.

The service began at 5:30 with a solemn procession, including a 60-member choir, American clergy and the Russian priests carrying icons. Reverend Brine spoke first, followed by Father Hotovitsky who gave a brief sermon in English emphasizing the blessings of peace and stating his wish that the Russian and Japanese people could be of one mind regarding the issues of war and peace. He then issued prayers for the Russian soldiers captured by the Japanese and for all who had died in the conflict.

The Russian priests, wearing magnificent vestments and crucifixes and carrying sacred icons, gathered around Father Hotovitsky and began a liturgical chant in the Old Church Slavonic language. Their rich deep voices blended with the incense and the smoke of hundreds of candles to create a moment of great solemnity and reverence. Following Orthodox tradition, the Russian delegation had remained standing throughout the service. At one point, the Russian Ambassador to the United States, fell to his knees to embrace the crucifix held by Father Hotovitsky. The head of the Russian peace delegation to Portsmouth in 1905, Sergei Witte, then bowed to kiss the crucifix, weeping profusely. It was a deeply emotional experience for all who were present. Even the Americans on hand were touched by the beauty and grandeur of the moment. It was clear to all that, for the Russians, this service was not a "pro forma" appearance. It was a heartfelt expression of sincere devotion to their religious heritage.

In closing, Father Hotovitsky expressed his hope that Russians and Japanese could now draw closer together and comfort the sorrows of those who had lost loved ones during the war.

Alexander Hotovitsky had been ordained in 1896 at the age of 24 after his marriage to Maria Scherbuhina. Because of his decency, noble idealism, and charismatic leadership, he was selected for an important missionary post in America at St. Nicholas Church in New York City. For years, St. Nicholas had been holding services on the first floor of an apartment building. Father Hotovitsky immediately set about the task of raising funds to build a new church, visiting all the existing Russian churches in America and even returning to Russia to seek help directly from the tsar. The project was completed in 1902, and by 1903 St. Nicholas had become the principal Russian Orthodox Church in America.

Father Hotovitsky would be instrumental in the building of 12 Orthodox churches in America. He initiated the publication of the American Orthodox Messenger, developed Russian Orthodox charity institutions, and raised funds to help Russian troops in Manchuria and Russian POWs held by the Japanese. In all, he served in America for 18 years until 1914, when he was transferred to Finland. In August of 1917, on the eve of the Bolshevik Revolution, he was recalled to Moscow and appointed sacrist of the Church of Christ the Savior in Moscow.

In 1920, he was arrested for teaching religious principles in violation of new anti-religion policies set forth by the Bolsheviks. In 1921, he became active in raising funds to help Russians suffering from famine. The authorities disapproved of the church's involvement in such activities and demanded that all funds be turned over to the state. In 1922, Lenin used the famine to justify the expropriation of all church property and riches. On March 28, 1922, the Soviet newspaper Isvestia published the most recent list of "enemies of the people." The Orthodox Patriarch of all Russia was listed along with Hotovitsky and other leading Russian priests.

Churches were taken over by the state. Most were destroyed, and some were converted into storage facilities. In November 1922, Father Hotovitsky was arrested and accused of holding secret meetings in his apartment to develop plans to protect church possessions from the state, thereby working to "topple the Soviet regime through the resulting starvation." He was sentenced to 10 years in prison, and all of his possessions were confiscated. Over the next 15 years Father Hotovitsky would be arrested repeatedly. The Soviet authorities maintained an ample dossier on Hotovitsky, describing him as "a very active and decisive preacher with an advanced education who is anti-Soviet and capable of exercising great influence on the people."

In 1937, as part of a major purge of Russian priests, Father Hotovitsky was arrested one last time and executed. In 1994, after the disintegration of the Soviet Union, the Holy Synod of the Church of Russia included Father Alexander Hotovitsky among the "new martyrs" of Russia and declared him a saint. An official icon was created of Father Hotovitsky to honor his canonization. His church, Christ the Savior in Moscow, where he had served as sacrist and which had been destroyed in the early 1930s, was rebuilt with the active participation of President Boris Yeltsin. The project was finished in the year 2000, and the church is now the principal church of Russia, featuring Father Hotovitsky's icon prominently on the first tier of its iconostasis.

(My icon of Father Hotovitsky was created with wood, gesso, egg tempera with natural pigments, and 23k gold. )

For more information about Father Hotovitsky, Russian icons or the Russian Christmas Bazaar, contact Marina Forbes at 332-2255 or by e-mail at marina@anylanguage.org. 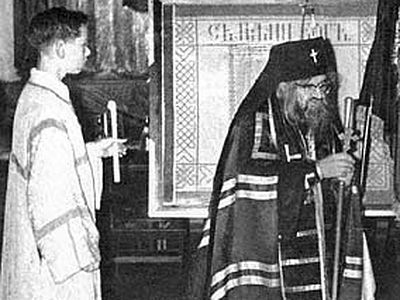 The Veneration of St. John of Shanghai and San Francisco: Recollections of a Spiritual Son Bishop Peter of Cleveland

The Veneration of St. John of Shanghai and San Francisco: Recollections of a Spiritual Son Bishop Peter of Cleveland The author of these recollections, Bishop Peter, was a spiritual son of St. John from his childhood. Bishop Peter was born Pavel Andreyevich Lukianov in San Francisco in 1948. He was tonsured a reader in 1965 by St. John of Shanghai and San Francisco. After studies at the Holy Trinity Seminary at Jordanville, New York, he worked at the headquarters of the Synod of Bishops of the Russian Orthodox Church Outside of Russia in New York City for six years. 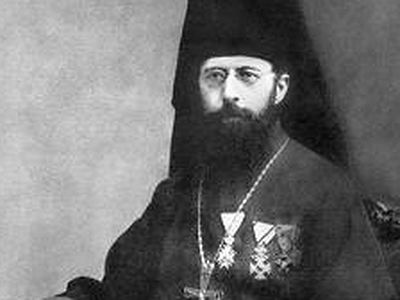 Source of the week: an interview with Fr. Sebastian Dabovich

Source of the week: an interview with Fr. Sebastian Dabovich Next to the Roman Catholics the Russian [Church] has the greatest number of communicants of any church in the civilized world. On the coast the two great strongholds of the Russian church are in Alaska and a section of California. Last year I made a trip of 6,000 miles in and along the Alaskan coast, inspecting our mission stations. 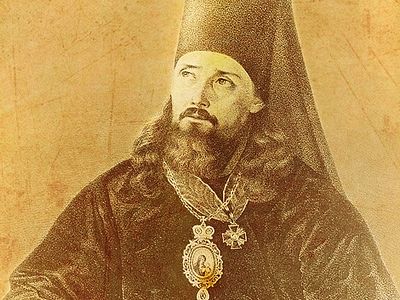 St. Juvenaly – First Martyr of America Commemorated July 2/15 The holy, glorious, right-victorious hieromartyr Juvenaly of Alaska, Protomartyr of America, was a member of the first group of Orthodox missionaries who came from the monastery of Valaam to preach the Word of God to the native inhabitants of Alaska. He was martyred while evangelizing among the Eskimos on the mainland of Alaska in 1796. His feast day is celebrated on July 2, and he is also commemorated with all the saints of Alaska (September 24), and with the first martyrs of the American land (December 12).
Комментарии
Войдите через FaceBook ВКонтакте Яндекс Mail.Ru Google или введите свои данные: