St. George Monastery in the Judean Desert, Accessible Once Again 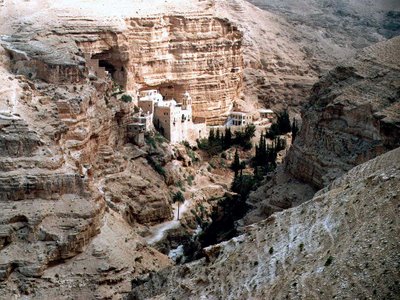 The stark beauty of the place is noticeable from the moment you get out of the car or bus. The Wadi Qelt area of the Judean desert forms an oasis of sheer beauty and certainly seems to have been a fitting place for Joachim and Anne to have stood and prayed to God for the Virgin Mary.

But for Manahem and Iguem, two pilgrims from Russia, the beauty of the area is a secondary concern. They made the trip to St. George's Monastery, in a remote part of the West Bank, not because of the scenery but because "we revere the saints," they explain to Travelujah. For them, it's all about visiting the holy places, places where biblical characters walked and lived, where they prayed and where their prayers were answered.

Asked to comment further on what they felt was so special about this place, why this place in particular when other churches or monasteries might be easier to visit, the priest and nun from central Russia simply smiled and said "it's a holy place, of course we want to come."

Their devotion and that of the thousands of other visitors to this remote sanctuary, named for Saint George, a 6th century Cypriot priest who came here around one hundred years after the place was initially built, had been severely tested over the past few years. That's because the ancient road leading to the monastery, dating from the time of the Ottoman Empire, had been severely damaged by an earthquake and winter storms in the area.

The road had provided an all important access point to the ancient monastery, which is carved into the side of a mountain and accessible even now only through a narrow, winding road followed by a long, winding foot path leading down (and up, when you leave) the side of a rather high mountain (at least 700 feet).

The area might have remained largely inaccessible, languishing between the government of Israel, which controls the area and the Palestinian Authority, who sees any encroachment on the West Bank by the Israelis as an affront, given that they want the same land to build their state. However, a special request by His Beatitude, the Greek Orthodox Patriarch Theopholis III to the Israeli Tourism Ministry spurred efforts along to find funds to rebuild the road.

"We are not in the business of building roads," Mr. Rafi Ben Hur, the Senior Deputy Director-General at the Israeli Tourism Ministry explains. "However, in this case, we felt we had to make an effort [to find the funds]." According to official reports, 1.76 million Israeli Shekels (around $480,000) was invested by the ministry to rebuild the road and to install new retaining walls and culverts to divert future rainstorm waters so that the monastery will continue to be accessible for tourists and pilgrims alike.

"The area has been rebuilt and is open for tourists, pilgrims and Palestinians alike," Mr. Ben Hur was careful to stress. "We want this place to be a bridge for peace and we hope that through this new effort, [the pilgrims who come will be] emissaries of peace."

Seeing the smiling faces of Manahem and Iguem as they soak in the atmosphere while Theopholis III and Archbishop Aristrachos, both of the Greek Orthodox Church, offer benedictions in the sanctuary, it certainly seems like Mr. Ben Hur's wish may come to fruition.

Eric Hammer is an author and journalist living in central Israel. His work has appeared in several regional newspapers. He writes frequently for Travelujah.