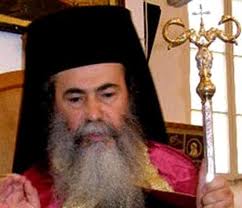 Patriarch Theophilos III of Jerusalem said Orthodox believers should settle the problem of schism in Ukraine without attracting arbiters from outside.

"You yourself should find common language," the Patriarch said in his interview with Ukrainian edition of the Kommersant daily.

Theophilos III arrived in Kiev where he participated in the conference World Religions and Civil Society United against Hatred and Extremism.