Arab Christians and their Rights 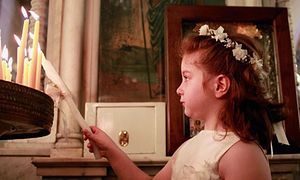 Photograph: Youssef Badawi/EPA (The Guardian)
Some writers and journalists criticize the positions of church leadership toward the uprisings, demonstrations, and protests that are occurring in our Arab countries under different names. Their criticisms might be true if we looked at them in an abstract, intellectual way that did not take into account how the situation will be when after the success or failure of these movements in achieving their stated goals. Arab Christians are anxious about their future. Yes, they are anxious. The reasons for their anxiety continue to be demonstrated to them and every day they become more convinced that the events and opinions that they are witnessing will either cause them to have virtually no influence over the course of events or will cause them to become second-class citizens. They are anxious about the fate that awaits them, if they are to become like their brothers in Iraq and in Palestine. They are anxious because for some extremists there is no reason for their existence.

Christians, like Muslims in these countries, long for freedom and equality for all the people of the same nation. They desire an end to the authoritarian regimes that for their own benefit made them hide behind them as a bulwark against movements of religious extremism. However, if they long for freedom, they long for a regime that respects freedoms, not only freedoms of religion and worship, but also political freedoms as well. They long for a civil state that does not deny the rights of any person just because he has a different religion from the majority of citizens.

Why are Christians and Muslims subjected to the inevitable choice between an authoritarian non-religious state and a religious state that is no less authoritarian and no less denies rights? Why must we choose between the custodianship of a party or of the security service and the custodianship of religious scholars who speak in the name of God who is free of all human reason and seeks to monopolize it? Why do some of them what a state that treats its Christians in a way that diminishes their citizenship leading to doubt about their national identity and their readiness to die for the nation and all its sons? Is there not a third solution based on respect for human rights without regard to religious affiliation?

We were very happy that the Egyptians rose up and were successful in what they struggled for. However, what we are witnessing now is completely different from the promises of reform for the entire regime that we had seen. The appointment of Emad Shehata Michael as governor of Qena stirred up a wave of demonstrations and protests against it. The protestors carried banners with slogans that are not fitting for a civil state that claims to have equality for all its citizens, such as "no authority for an unbeliever over believers", "no authority for a dhimmi over a Muslim", "there is no god but God, Michael is the enemy of God"... The worst is that the military regime in Egypt backed down in fear of the demonstrations and withdrew the appointment and froze it for three months.

It seems apparent that Salafist movements are growing in Egypt and that they declare all those who differ with them to be apostates. In the Friday sermon given by Ibrahim al-Khouly, a prominent member of the Salafist group, he stated that, "We shall absolutely not neglect Egypt's Islamic identity. Anyone who calls for secularism is outside the faith and the community." Likewise, thousands of Salafists protested in front of the Coptic Orthodox cathedral, accusing the church of kidnapping Christian women who "announced their conversion to Islam." All of this does not point to a promising future.

The situation in other countries that witness protests and demonstrations worries Christians. Uncertainty surrounds what current events will lead to. However, despite everything, Christians long for a state of freedom and equality, of rights and responsibilities.