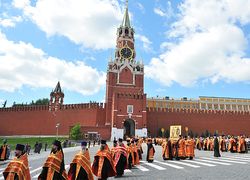 The celebration of the Day of Slavic Writing opened with the patriarch's liturgy in the Kremlin Uspensky Cathedral on Tuesday. The service was followed by a religious procession from Red Square to Vasilyevsky Spusk, where Patriarch Kirill officially opened the annual festival. A big festival was also held there.

In his address to the people present at the celebration, the Patriarch called on the Russian people to hold on to their Orthodox roots.

He recalled that St. Cyril and Methodius "created the root system of our nation." Unlike other missionaries, who spoke Greek and even Latin, "they realized that God's words should be preached to people in their language" and created the alphabet and translated the Gospels into Slavonic.

The Patriarch called on young people to stop thinking of the past as "something boring and non-modern" and remember that "there is no future without the past, which lives in the present."

The celebrations will end in a concert in the State Kremlin Palace.