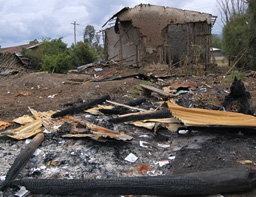 More than 500 Muslims have been given prison sentences in Ethiopia for violent attacks against Christians that left one dead, and 69 churches burned to the ground, reports International Christian Concern (ICC).

An Ethiopian court sentenced 579 Muslim extremists to between three and 18 months in prison for violence that lasted an entire week against Christians beginning on March 2, 2011.

ICC has also reported that 107 individuals stand accused under terrorism-related charges for their roles in the attacks, as well as eight gang leaders that authorities are still looking for.

In March this publication reported how thousands of Islamic extremists were attacking churches throughout Ethiopia. According to Compass Direct more than 4,000 Christians in and around Asendabo, in the Jimma Zone were displaced as a result of attacks after Muslims accused a Christian of desecrating the Quran.

A pastor based in the Ethiopian capital of Addis Ababa reported in March: “The church requested more police protection. The authorities sent security forces, but they were overwhelmed by the attackers.”

After the destruction began at Asendabo, it spread to Chiltie, Gilgel Gibe, Gibe, Nada, Dimtu, Uragay, Busa and Koticha, as Muslim mobs in the thousands rampaged throughout the area, Compass Direct reported.

Following the court judgments this week, an Ethiopian church leader told ICC: “I am glad that the rule of law prevailed and the church has finally got protection from the government. The judges who looked at these cases have delivered justice. We are happy that the truth has finally been revealed.”

Ethiopia is the second most populous country in the African continent, and has a Christian majority. According to the 2007 Ethiopian census the country is 62.8 percent Christian, and just 33.9 percent Muslim. However, ICC explain that in regions where Muslims do make up the majority Christians are known to face persecution.

Jonathan Racho, ICC’s Regional Manager for Africa has said, “We welcome the decision of Ethiopian courts. We hope that the decision sends a strong message to radical Muslims that violence against innocents will not go unpunished.”