Sunday of the Fathers of the First Six Councils 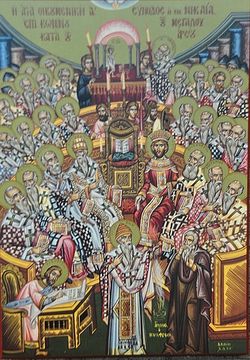 The Orthodox Church acknowledges Seven Holy Ecumenical Councils: The First Ecumenical Council (Nicea I) (May 29, and also on seventh Sunday after Pascha) was convened in the year 325 against the heresy of Arius, in the city of Nicea in Bithynia under StConstantine the Great, Equal of the Apostles.

The Second Ecumenical Council (Constantinople I) (May 22) was convened in the year 381 against the heresy of Macedonias, by the emperor Theodosius the Great.

The Third Ecumenical Council (Ephesus) (September 9) was convened in the year 431 against the heresy of Nestorius, in the city of Ephesus by the emperor Theodosius the Younger.

The Fourth Ecumenical Council (Chalcedon) (July 16) was convened in the year 451, against the Monophysite heresy, in the city of Chalcedon under the emperor Marcian.

The Fifth Ecumenical Council (Constnatinople II) (July 25) "Concerning the Three Chapters," was convened in the year 553, under the emperor Justinian the Great.

The Sixth Ecumenical Council (Constantinople III) (January 23) met during the years 680-681, to fight the Monothelite heresy, under the emperor Constantine Pogonatos.

The fact that the Seventh Ecumenical Council (Nicea II) is not commemorated today testifies to the antiquity of today's celebration. The Seventh Council, commemorated on the Sunday nearest to October 11, was convened at Nicea in the year 787 against the Iconoclast heresy, under the emperor Constantine and his mother Irene.

The Church venerates the Holy Fathers of the Ecumenical Councils because Christ has established them as "lights upon the earth," guiding us to the true Faith. "Adorned with the robe of truth," the doctrine of the Fathers, based upon the preaching of the Apostles, has established one faith for the Church. The Ecumenical Councils, are the highest authority in the Church. Such Councils, guided by the grace of the Holy Spirit, and accepted by the Church, are infallible.

The Orthodox Church's conciliar definitions of dogma have the highest authority, and such definitions always begin with the Apostolic formula: "It seemed good to the Holy Spirit and to us..." (Acts 15: 28).

The Ecumenical Councils were always convened for a specific reason: to combat false opinions and heresies, and to clarify the Orthodox Church's teaching. But the Holy Spirit has thus seen fit, that the dogmas, the truths of faith, immutable in their content and scope, constantly and consequently are revealed by the conciliar mind of the Church, and are given precision by the holy Fathers within theological concepts and terms in exactly such measure as is needed by the Church itself for its economy of salvation. The Church, in expounding its dogmas, is dealing with the concerns of a given historical moment, "not revealing everything in haste and thoughtlessly, nor indeed, ultimately hiding something" (St Gregory the Theologian).

A brief summary of the dogmatic theology of the First Six Ecumenical Councils is formulated and contained in the First Canon of the Council of Trullo (also known as Quinisext), held in the year 692. The 318 Holy Fathers of the First Ecumenical Council are spoken of in this Canon I of Trullo as having: "with unanimity of faith revealed and declared to us the consubstantiality of the three Persons of the Divine nature and, ... instructing the faithful to adore the Father, Son, and Holy Spirit with one worship, they cast down and dispelled the false teaching about different degrees of Divinity."

The 150 Holy Fathers of the Second Ecumenical Council left their mark on the theology of the Church concerning the Holy Spirit, "repudiating the teaching of Macedonius, as one who wished to divide the inseparable Unity, so that there might be no perfect mystery of our hope."

The 200 God-bearing Fathers of the Third Ecumenical Council expounded the teaching that "Christ, the Incarnate Son of God is One." They also confessed that "she who bore Him without seed was the spotless Ever-Virgin, glorifying her as truly the Mother of God.

The 630 Holy Fathers of the Fourth Ecumenical Council decreed that "the One Christ, the Son of God... must be glorified in two natures."

The 165 God-bearing Holy Fathers of the Fifth Ecumenical Council "in synod anathematized and repudiated Theodore of Mopsuestia (the teacher of Nestorius), and Origen, and Didymus, and Evagrius, renovators of the Hellenic teaching about the transmigration of souls and the transmutation of bodies and the impieties they raised against the resurrection of the dead."

The 170 Holy Fathers of the Sixth Ecumenical Council "taught that we ought to confess two natural volitions, or two wills [trans. note: one divine, and the other human], and two natural operations (energies) in Him Who was incarnate for our salvation, Jesus Christ, our true God."

In decisive moments of Church history, the holy Ecumenical Councils promulgated their dogmatic definitions, as trustworthy delimitations in the spiritual battle for the purity of Orthodoxy, which will last until such time, as "all shall come into the unity of faith, and of the knowledge of the Son of God" (Eph. 4: 13). In the struggle with new heresies, the Church does not abandon its former dogmatic concepts nor replace them with some sort of new formulations. The dogmatic formulae of the Holy Ecumenical Councils need never be superseded, they remain always contemporary to the living Tradition of the Church. Therefore the Church proclaims:

"The faith of all in the Church of God hath been glorified by men, which were luminaries in the world, cleaving to the Word of Life, so that it be observed firmly, and that it dwell unshakably until the end of the ages, conjointly with their God-bestown writings and dogmas. We reject and we anathematize all whom they have rejected and anathematized, as being enemies of Truth. And if anyone does not cleave to nor admit the aforementioned pious dogmas, and does not teach or preach accordingly, let him be anathema" (Canon I of the Council of Trullo).

In addition to their dogmatic definitions, the Holy Fathers of the Ecumenical Councils exerted great efforts towards the strengthening of church discipline. Local Councils promulgated their disciplinary canons according to the circumstances of the time and place, frequently differing among themselves in various particulars.

The universal unity of the Orthodox Church required unity also in canonical practice, i.e. a conciliar deliberation and affirmation of the most important canonical norms by the Fathers of the Ecumenical Councils. Thus, according to conciliar judgment, the Church has accepted: 20 Canons from the First, 7 Canons from the Second, 8 Canons from the Third, and 30 Canons from the Fourth Ecumenical Synods. The Fifth and the Sixth Councils concerned themselves only with resolving dogmatic questions, and did not leave behind any disciplinary canons.

The need to establish in codified form the customary practices during the years 451-680, and ultimately to compile a canonical codex for the Orthodox Church, occasioned the convening of a special Council, which was wholly devoted to the general application of churchly rules. This was convened in the year 692. The Council "in the Imperial Palace" or "Under the Arches" (in Greek "en trullo"), came to be called the Council in Trullo. It is also called the "Quinisext" [meaning the "fifth and sixth"], because it is considered to have completed the activities of the Fifth and Sixth Councils, or rather that it was simply a direct continuation of the Sixth Ecumenical Council itself, separated by just a few years.

The Council in Trullo, with its 102 Canons (more than of all the Ecumenical Synods combined), had a tremendous significance in the history of the canonical theology of the Orthodox Church. It might be said that the Fathers of this Council produced a complete compilation of the basic codex from the relevant sources for the Orthodox Church's canons. Listing through in chronological order, and having been accepted by the Church the Canons of the Holy Apostles, and the Canons of the Holy Ecumenical and the Local Councils and of the holy Fathers, the Trullo Council declared: "Let no one be permitted to alter or to annul the aforementioned canons, nor in place of these put forth, or to accept others, made of spurious inscription" (2nd Canon of the Council in Trullo).

Church canons, sanctified by the authority of the first Six Ecumenical Councils (including the rules of the Seventh Ecumenical Council in 787, and the Constantinople Councils of 861 and 879, which were added later under the holy Patriarch Photius), form the basis of THE RUDDER, or KORMCHAYA KNIGA (a canon law codex known as "Syntagma" or "Nomokanon" in 14 titles). In its repository of grace is expressed a canonical norm, a connection to every era, and a guide for all the local Orthodox Churches in churchly practice.

New historical conditions can lead to the change of some particular external aspect of the life of the Church. This makes creative canonical activity necessary in the conciliar reasoning of the Church, in order to reconcile the external norms of churchly life with historical circumstances. The details of canonical regulation are not fully developed for the various eras of churchly organization at all once. With every push to either forsake the literal meaning of a canon, or to fulfill and develop it, the Church again and again turns for reasoning and guidance to the eternal legacy of the Holy Ecumenical Councils, to the inexhaustable treasury of dogmatic and canonical truths.

Terry Finley 7 августа 2016, 06:00
Why doesn't the church still handle heresies in that same fashion? Thanks.