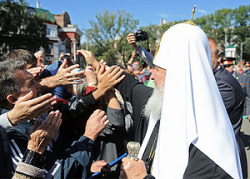 Patriarch Kirill of Moscow and All Russia consecrated the biggest in the Far East Orthodox church - Trinity Cathedral in Magadan.

"Kolyma is the Russian Calvary and perhaps those who tormented people on this earth, pronounced terrible words during transporting convicts "step to the right, step to the left - shooting without warning," couldn't imagine that a grand cathedral will be erected here," the Patriarch said after the prayer.

He called the cathedral "a great sign showing that God's truth is alive and none even most powerful human forces can destroy this truth" and called it a symbol of victory over evil, "faith in Christ, as for confessing Him many people were exiled here to Kolyma to become martyrs."

Patriarch Kirill said that his father on the eve of his wedding was arrested only for chanting in amateur choir in one of St. Petersburg churches though he worked in secular job and was getting higher education.

The Primate reminded "how many human lives, means, resources were spent in vain" in atheistic years.

"And now we are terrified to see that we lack the most necessary things - good roads, high quality cars, durable houses. Where are those innumerable goods and resources? They vanished. Why? Because we built the life of our nation, our society and state without God and opposing God," he stressed.

According to him, today there appear people, including those coming to politics, who say that "we need to return to that past - life without God."

"We answer to all these people: come to Kolyma and you'll see what means to build life without God and, moreover, on bones of those who confessed their faith in God," the Patriarch said.

Kolyma is the land of Stalin's notorious prison camps.

The service lasted several hours, followed by the presentation of Russian Orthodox Church orders to regional officials and to the cathedral's architects.

Reports had said that the cathedral's construction started about ten years ago. Close to 900 million rubles have been spent on its construction since then. This money has been provided by the regional government and private donors.