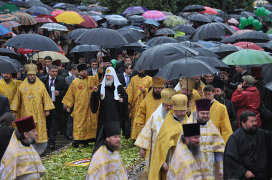 Patriarch Kirill of Moscow and All Russia visits Moldova. © RIA Novosti. Sergey Pyatakov
I have a confession to make. Twenty years ago, when the Soviet Union was falling apart, I did not believe that Moldova - a small predominantly Romanian-speaking Soviet republic between Romania and Ukraine - would survive as an independent state. I thought it would merge with Romania, where it had belonged between the World Wars. Time went by, and the common explanation for Moldova to remain independent was the desire of the local post-Soviet elite to remain the big fish in a small pond.

Last week, I went to Chisinau for the first time in my life, and I realized that this country would probably remain weak and messy, but sovereign. Moreover, despite the language and a substantial shared history with Romania, Moldovan identity, surprisingly, goes much deeper than the Soviet Union. It is certainly associated with being part of the Russian Empire since around the turn of the 18th and 19th century, but also offers an interesting case study of the complex relationship between the church and nationhood in this part of the world.

I was in Moldova for a visit by the leader of the Russian Orthodox Church, Patriarch Kirill of Moscow and All Russia, who considers Moldova part of his jurisdiction and disputes it with the Patriarch of Romania – a country that shares Orthodox Christianity with Russia, but its church is totally independent administratively. It was Kirill’s first visit to Moldova in his capacity as Patriarch, and it took place amidst a prolonged and deep political crisis in the country, which has been unable to elect a president for more than two years. Many here believed the patriarch’s visit was political.

Moldova is widely considered “Europe’s poorest country” – something that was evident in a nearly empty village adjacent to the beautifully rebuilt monastery 50 kilometers north of Chisinau that Patriarch Kirill visited. While hundreds of enthusiastic clergy and laity met the patriarch in the monastery, only a handful of elderly women and small children said good buy to him in the village below the hill. The young people have most left, to work in Russia, Italy, Portugal and other countries far away from home. Up to a quarter of Moldova’s population of between three and four million work abroad.

Special Place on the Map

Given its weak economy, Moldova’s place on the religious and political map of Europe is far more important.

The country’s Western border is a result of a 200-year-old compromise between two empires that no longer exist – Russian and Ottoman. It divided the historical Moldovan district, whose cultural center, Jassy, is on the Romanian side of the border. The Greater Romania concept always considered Moldova to be its part, and de facto the Romanian state controlled this territory from 1918 to 1940 and during World War II when it occupied it again.

For the Moscow Patriarchate – as some say, the only post-Imperial Russian body – Moldova is its only major non-Slavic speaking part, which thus reinforces its supranational character. The Metropolis of Moldova, led by Metropolitan Vladimir Cantarean, numbers about 1300 parishes and about 50 monasteries. In most of them, service is celebrated in the local Romance language.

It is a rural country, with a powerful popular piety, which escaped the cruelest phase of Soviet atheist persecution that took place in the 1920s and 30s, since it was not part of the Soviet Union at the time. Today, it has the highest density of churches and priest per capita on the entire territory of the Moscow Patriarchate, which claims all post-Soviet states except Armenia and Georgia plus Japan and China where small Orthodox Churches had been founded by Russian missionaries largely in the 19th century. But Moldova is the borderland, which is disputed by the Romanian Orthodox Church.

For Moldova, the Patriarch of Moscow is the living symbol of its spiritual unity with Russia and as such, he is important both for the Russian-speaking minority and for a large share of Moldova’s population, which sees ties with Moscow as a guarantee of the country’s independence from Romania. At the same time, there is a vocal minority here that leans toward reunification with Romania.

Under Both Moscow and Bucharest

Back in 1992, one of the Moscow Patriarchate bishops here defected to the Romanian Orthodox Church, thus recreating the Metropolis of Bessarabia, which had existed here in the interwar period. Today, it has about 150 parishes – about one-tenth the size of the Russian Church’s Metropolis of Moldova. According to a Moldovan expert, this is roughly the same ratio of Moldovans dreaming of a reunification with Romania and those who want to live in an independent Moldovan state.

“We have 95 percent of Moldovans who consider themselves Moldovans, and 5 percent, who consider themselves Romanians,” said Nicolae Chirtoaca, former ambassador of Moldova to the United States, who today heads an independent Institute of Political Studies. According to him, the resonance from pro-Romanian groups is disproportionate with their size in Moldovan society. “People in Bucharest and in Moscow believe much more in the possibility of the unification of Moldova and Romania than do people here,” he said. The Metropolis of Bessarabia, in his words, is a “failed project.”

The church conflict in Moldova stems from the fact the two biggest, “fraternal” Orthodox Churches, who recognize each other as canonical, simultaneously consider Moldova to be their territory. It is a blatant violation of the canonical order. But it is also a conflict that has largely lost its steam.

Metropolitan Petru Paduraru of Bessarabia refused to support the protests against the visit of the Patriarch of Moscow, except to say it was “political.” Patriarch Kirill said at the meeting with Acting President Marian Lupu that the conflict is up to the churches to resolve, not the state. “I very much hope that, through God’s Grace, we, two brotherly Orthodox Churches – Russian and Romanian – will find the common points and resolve these conflicting situations,” the Patriarch said. “It is not easy, because we, religious people, live in concrete political contexts, but we can achieve much by rising above these contexts.”

Former Moldovan envoy to the United Nations Alexei Tulbure, who works as an independent political consultant today, said that the acute period of the church conflict in Moldova is far behind, and Moldova, both secular and religious, is fated to build its future balancing out Moscow and Bucharest or, more broadly, Moscow and the EU.

“The question is not who will be above us,” Tulbure said, “it will be both. Most people don’t play an active role in church life. For them it is the cultural and ritualistic belonging that matters. I know people who are married in the Romanian Church and baptize their children in the Moldovan, or vice-versa. There are people who don’t accept anything Russian. For them, whether it is business, politics or church, whatever comes from Moscow is evil. And there are those who think that all evil comes from Bucharest. And there is a middle, which is presently watered down because of instability.

In this peculiar situation Kirill has abandoned his “Russian world” rhetoric about the spiritual unity of the nations that had once been part of the Russian Empire – a theory that had generated a lot of criticism in Ukraine and Moldova. He presented diocese and parishes with Gospels in Moldovan and Church Slavonic depending on the language in which they worship, and emphasized his respect for the Moldovan state.

Moldova has been at a political dead-end for two years, with parliament unable to elect a president. Over that period, there have been four election campaigns.

More than any other country, Russia plays a huge role in the local political life and system of symbols. “Russia has always been a serious and even defining factor here, no matter what it does,” Tulbure said. “We belong to this world as a culture and civilization.”

Local media reported that the Patriarch was supposed to travel not only to Chisinau, but also to the self-proclaimed Transdnestr Republic, where presidential elections are coming up, and the Turkic speaking region Gagauzia. But the visit was cut down to two days, officially for health reasons.

During these two days, the patriarch celebrated the Liturgy in the city square under pouring rain, preached, met with the leading politicians, who belong to the opposing parties, accepted a top national award, visited a cancer center for children and the newly rebuilt monastery and granted a 45-minute interview to Moldovan, Russian and Romanian television channels.

But for the local media, political questions overshadowed everything else. A demonstration by several dozen people demonstrated against “Moscow’s intervention” and the postponement of the flower-laying ceremony at the monument to a local medieval prince, Stephan the Great, was the top news here.

“Everything gets politicized here,” said Chirtoake. In his view, the church, on the one hand, enjoys the highest trust rating in the Moldovan society and, on the other hand, does not represent a serious political force.

But to a large extent, and perhaps more here than in other post-Soviet countries, the Orthodox Church is perceived as a crucial element of the country’s identity. Political scientists here – and the people who greeted the patriarch – all testify to the fact that Moldovan identity is much deeper than just Soviet heritage or the survival vehicle for local elites.

“Belonging to the world that does not necessarily speak Russian but feels Russian is a major element of our identity,” Tulbure said. “Moldova is a symbiosis of the Romance and Slavic worlds.”