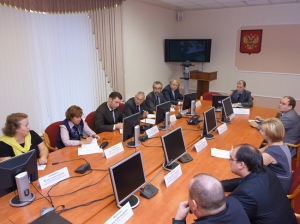 The first meeting of a working group for counteraction against destructive religious cults took place on October 20, 2011 in Archangelsk. Participants included representatives of the diocese of Archangelsk and Kholmogory, local government and law enforcement officials, and the Northern (Arctic) Federal University. Presiding at the meeting was the deputy governor of Archangelsk province, Roman Balashov.

Archangelsk province is one of the first regions where, within the framework of countermeasures against extremism, an important question has been raised regarding the activities of destructive religious cults. Increasingly more often, religious sects are taking the position that they are one of the existing confessions, spread the propaganda of their illegal activities in educational institutions, agitate in marketing spheres, and masquerade as service industries.

“The activities of these organizations have already exceeded boundaries, causing serious psychological and physical harm to people. Today, destructive religious cults have created a threat of another scale to the public safety,” noted the deputy governor.

In recent years, a number of sects that can be confidently categorized as destructive totalitarian cults have been freely conducting their events in Archangelsk province, with the aim of recruiting followers. Using municipal establishments for recruitment creates an illusion of legitimacy. The followers of these sects give particular attention to the field of education and healthcare. Under the guise of religious activity, the followers of totalitarian cults (many of whom come from Western countries, and are not local people) often pursue political aims, and a number of the sectarian organizations have an anti-government character. In all the major cities and villages of Archangelsk province, meeting halls of destructive cults are being built. The main activities of these pro-American sects take place in the city of Plesesk, where the only Russian cosmodrome, is located, in Severodvinsk, the center of military industry, in the economically developed southern regions (Velsk, Kotlas, Koryazhma, and Octyabrsky), and in the territories along the Arctic sea (Mezersky and Primorsky regions).

One of the key areas of the working group is to raise the education level of the local inhabitants on this subject. This would require giving the people information about the cults which have appeared in their towns and villages, showing the dangerous results of their presence and practices. Help would be needed from the media, and a cycle of television programs is to be created. The government authorities, with the assistance of the Archangelsk diocese of the Russian Orthodox Church, plans to organize explanatory programs in institutions such as educational collectives, reports the press agency of the Archangelsk diocese.