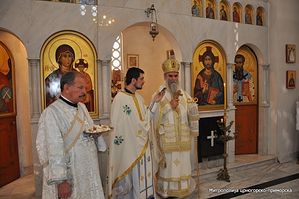 According to the decision of the Holy Assembly of Bishops of the Serbian Orthodox Church at this year's session in May on creating of a new Diocese of Buenos Aires and South-Central America, with a seat in Buenos Aires, and on placing His Eminence Amfilohije Archbishop of Cetinje and Metropolitan of Montenegro and the Littoral for the administrator of the newly-founded diocese, Metropolitan Amfilohije arrived in Argentina on October 22, 2011, the feast of the Apostle James and St. Stephen the Blind, despot of Serbia, to organize a new Diocese and serve until the election and the enthronement of a Diocesan bishop, reports theofficical website of the Serbian Orthodox Church, which cites the website of Metropolitanate of Montenegro and the Littoral.

Parishes of the Serbian Orthodox Church in South America, until May of this year, were under the pastoral care of His Grace Bishop Mitrophan of East America, but in recent years the need has arisen for the creation of a new Diocese for South America, which the Assembly instituted this spring.

There are four churches of the Serbian Orthodox Church in Argentina: the Cathedral of the Nativity of the Most Holy Theotokos in Buenos Aires, a church of St. Sava in the same city, a church of St. Michael the Archangel in Venado Tuerto, Chaco, province. In the planning stage is a church in Madariaga in the province of Buenos Aires.

In Chile, there is an Orthodox mission in the capital Santiago, and in Brazil there are a few parishes and missions, mostly of Orthodox Brazilians, in the city of Recife and ne. In Sao Paolo (Brazil) a mission is planned to open, as well as in Caracas, (Venezuela).

Serbs began arriving in Argentina at end of the 19th century and up until the 1950s and 60s (at first for economic reasons, and later after the Second World War, mainly as a political emigration). In Chile there are mostly younger people, who came in last fifteen years, and it's similar in Brazil and Venezuela.

Besides these states in which the Orthodox mission will develop further, the Diocese includes all South and Central America except Mexico, which remains under the jurisdiction of Bishop of West America.

Metropolitan Amfilohije, along with our community in Argentina, will work on securing necessary conditions for a permanent residence of the diocesan bishop in Buenos Aires, and to that aim an extensive restoration of the building near the Cathedral church of Theotokos is being carried out.

The Metropolitan served the Divine Liturgy in the Cathedral church as early as Sunday October 23, and on October 24 he visited the Embassy of the Republic of Serbia, where he met Mrs. Gordana Vidovic, the ambassador of the Republic of Serbia in Argentina. On the feast day of St. Parascheva- Petka, on October 27, he served in the church of St. Sava, also in Buenos Aires, where he informed the faithful about the decision of the Holy Assembly of Bishops.