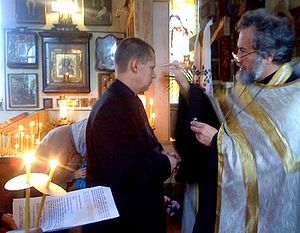 Finnish Lutheran Church pastor Juha Molari converted to the Orthodox faith at a ceremony conducted by Archpriest Nikolay Voskoboinikov at Helsinki's St. Nicholas Church, which belongs to the Russian Orthodox Church, on October 30.

"It is a very important decision in my life, but it cannot be called difficult. The Russian Church is not some sect, but a multi-million community of worshippers living in different countries," Molari told Interfax-Religion.

Molari said that his wife and children are Russian citizens and belong to the Moscow Patriarchate.

"That is why it is quite normal for me to belong to the same Church," Molari said, adding that he was supported by Orthodox priests.

"I realized that it is easy to be within the Church where you are loved," he said.

The Lutheran Church earlier defrocked Pastor Molari for openly criticizing the Kavkaz-Center website, which was recognized by Russia as extremist.

"Molari has been punished because he demanded Finnish law enforcement agencies' reaction to the activities of Kavkaz-Center, organized a picket against this website and spoke out against this mouthpiece of Chechen terrorists led by Doku Umarov," Finland's Antifascist Committee head Johan Backman told Interfax.

Molari has been campaigning for the website's shutdown for spreading propaganda supporting terrorism. He turned to the police in October 2010 and complained he had been threatened by Chechen terrorists and separatists.

The police, however, dismissed the priest's demands as groundless and refused to launch a criminal investigation into these threats.

Molari also advocated the interests of Russian national Rimma Salonen, criticized the Pro Karelia anti-Russian organization, which demands a review of the post-World War II border and the return of Karelia's territory to Finland, as well as protested against the public demonstration of the Soviet Stori anti-Russian film in Finland organized by Pro Karelia.

In April, the Human Rights Center of the World Russian People's Assembly called on Molari to convert to the Orthodox faith.

"Orthodox people really need such brave people like you today," it said.