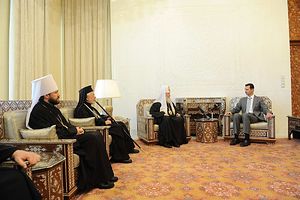 On 13 November 2011, His Holiness Patriarch Kirill of Moscow and All Russia met with the President of Syria Bashar al-Assad at the Presidential Palace in Damascus. They were joined in the meting by His Beatitude Ignatius IV, Patriarch of the Great Antioch and All the East, Metropolitan Hilarion of Volokolamsk, Bishop Sergiy of Solnechnogorsk, archpriest Nikolai Balashov, Metropolitan Antonio of Mexico, and Metropolitan Damaskinos of São Paulo and Brazil.

Attending the meeting were Archbishop Nifon of Philippopolis and archimandrite Alexander (Yelisov).

President al-Assad greeted His Holiness Patriarch Kirill, reminded all those present that it was from Damascus that Christianity began to spread all over the through the labours of St. Paul, and said: ‘Syria gives a wonderful example of peaceful coexistence of various religious communities consisting of people of different nationalities.”

His Holiness Kirill noted that he had visited Syria many times. ‘I know your country and your people well. Syria is a country with powerful and profound culture. Both Orthodox Christianity and Islam have taken part in its shaping, and we highly appreciate dialogue and cooperation and the example of peaceful life given by Syria.

‘The Church of Antioch led by His Beatitude Patriarch Ignatius IV and the Russian Church have maintained good relations for many centuries. I have known Patriarch Ignatius for over forty-three years, and after I have become Patriarch I decided to visit Syria and my beloved brother by all means. Today we have concelebrated the Divine Liturgy, and I was deeply moved by the atmosphere in the cathedral as so many people gathered there have shown strong and sincere liking for Russia and the Russian Orthodox Church.”

It was noted during the talk that mixed marriages are a significant factor in bilateral relations between Russia and Syria. These families live in both countries. There is the Representation Office of the Russian Orthodox Church in Damascus that takes care for the Russian-speaking staff of embassies and other foreign institutions in the country, representatives of the Russian and other companies, and those who have arrived in Syria being married to its residents. The Representation of the Church of Antioch lead by Archbishop Nifon functions in Moscow.

His Holiness added: ‘We pray for the Church of Antioch, for Orthodox Christians and all people in Syria. We wish them peace and prosperity.’

The President of Syria drew attention to the special importance of relations maintained by the authorities of the country with the Orthodox Church of Antioch, which plays a very important part in the spiritual life here, and expressed his deep concern about the persecution of Christians in certain parts of the Arab world, noting that the exodus of the Arab population from the Middle East leads to the reinforcing of religious extremism.

H.E. Bashar al-Assad is confident that His Holiness Patriarch Kirill’s visit will be highly appreciated by Christians in Syria and in the entire Middle East. ‘I welcome in advance all agreements that you will reach with His Beatitude Patriarch Ignatius,” he said.

The President of Syria believes that contacts with Christians from other countries are very important for Christians in the Middle East. He noted the importance of friendly relations and contacts between the Syrian and Russian Orthodox young people and appraised the level of mutual understanding and cooperation between Christians and Muslims in Russia.

As to the situation in the Middle East, Bashar al-Assad gave a high appraisal to the position of Russia adopted on the events in the region and at the same time expressed his concern over the growing extremist interpretations of Islam in the Middle East. He noted his anxiety about current attempts to use confessional differences in the political crisis in Syria.

His Holiness noted that crisis in the Middle East had an adverse effect primarily on the minorities, including Christian communities, and emphasized that the events in Iraq and Egypt give rise to concern.

Patriarch Kirill expressed appreciation of the nature of Christian-Muslim relations in Syria and Lebanon and said that he shares concern about the spread of religious radicalism that threatens the integrity of the Arab world.

The President of Syria stated his views on the events in Syria and in the Arab world, noting the necessity of reforms and expressing his profound concern for the actions of terrorist groups in his country.

His Holiness Patriarch Kirill believes that objective information about events in Syria is extremely important at present as many world mass media give a one-sided interpretation of these events.

The Primate of the Russian Orthodox Church highly appraised the role of the Orthodox Church of Antioch in maintaining relations between the people of Syria and Russia, noting that last year the Russian President Dmitry Medvedev awarded His beatitude Ignatius IV with the Order of Friendship. His Holiness hopes that the Church of Antioch will continue to bring a considerable contribution to the life of society in Syria and that nothing will prevent her from doing it.

Bashar al-Assad expressed his hope for considerable achievements in cooperation between the Primates of the two Orthodox Churches.

Patriarch Ignatius affirms good brotherly relations between the Patriarchs and between the Orthodox Churches of Russia and Antioch.

His Holiness Patriarch Kirill presented President al-Assad with a chalice made by the skilled craftsmen from the Urals.