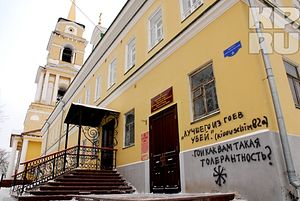 On what was celebrated in Russia as "Tolerance Day", unknown criminals covered the Archbishopric house in Perm with insulting anti-Russian inscriptions reports Interfax - Religion.

The Ministry of Interior and the Federal Security Service are investigating the case, the local edition of the Kommersant daily writes.

The criminals also depicted a pagan swastika, a pentagram and the star of David on the wall. All inscriptions are made with black and blue paint balloons.

The diocesan officials do not exclude the possibility that the goal of the action is to foment conflict among religious groups and insult the sensibilities of Orthodox believers.

"It was either done by [demonically] possessed people, or it is an carefully planned provocation based on precise political calculations," editor-in-chief of the newspaper Pravoslavnaya Perm priest Vyacheslav Zuyev believes.

“My opinion is that this is a provocation,” said Fr. Vyacheslav Zuyev. “It was done by politicized pragmatists with no relation to any religion whatsoever. Orthodox Christians do not draw crosses on mosques, and Muslims do not draw crescents on churches. Some one here is trying to achieve his own aims. We aspire to become a cultural capital, but we have certain people like this who could write such things. I believe the investigation calls not for police or prosecutors, but for the special services, reports Komsomolskaya Pravda.