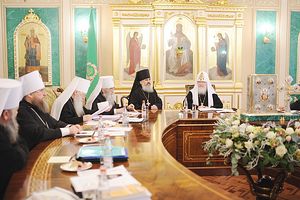 The final of 2011 session of the Holy Synod of the Russian Orthodox Church, Moscow Patriarchate was held at the Patriarch’s residence in St. Daniel’s Monastery on December 28.

The new Novgorod metropolia was established in the Novgorod region. It includes the dioceses of Borovichi and Novgorod. Archimandrite Yefrem (Barbiniagra), a cleric of the Novgorod diocese, was elected (nominated) Bishop of Borovici and Pestovo.

The Synod released archpriest Alexander Abramov from his duties of vice-chairman of the Synodal Department for Religious Education and Catechization in compliance with his request.

Summoned to the spring and summer sessions of the Holy Synod in 2012 were: Metropolitan Nifont of Lutsk and Volyn, Metropolitan Pavel of Ryazan and Mikhailov, Archbishop Nikon of Ufa and Sterlitamak, Bishop Tikhon of Maikop and Adygeya, Bishop Aristarkh of Kemerovo and Novokuznetsk.