The Law of God for Thailand 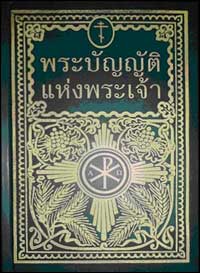 In January, 2012, an almost three-year-long effort came to a successful conclusion. Protopriest Seraphim Slobodskoy’s The Law of God was translated into the Thai language. This was done by Priest Danai (Daniel) Vanna, the first Thai Orthodox priest, a graduate of St Petersburg Theological Seminary; Mrs Naparta Aphichataphong, former official translator of English for the Parliament of Thailand, now studying at SPTS; and Mr Yingsak Samsen, a specialist in the Russian language. The editor-in-chief was Archimandrite Oleg (Cherepanin), representative of the Russian Orthodox Church in Thailand. Mrs Aphichataphong discussed this project with us:

—Tell us about the Orthodox Church in Thailand today.

—In 2000, Archimandrite Oleg (Cherepanin) came to Thailand to establish the Orthodox Church in the country. When the Soviet Union collapsed, many Russians left to live in Thailand. Patriarch Alexy of blessed memory then turned his attention to his flock there, and blessed Fr Oleg to go there to build a church.

When Fr Oleg arrived, he did not speak Thai at all, but spoke English. Since then, Fr Oleg has greatly increased the membership in the Church, he has built several churches and is even building a monastery. This is remarkable, this is astounding and incredible that he achieved this in such little time. I know one thing; he did not come alone. God came with him.

—Who first thought of doing a translation of The Law of God and not a catechism or anything else?

—When I came to the Orthodox Church, Fr Oleg immediately proposed that I translate this book specifically, since he had nothing else. Fr Danai (Daniel) Vanna could also have done this, but he is a very busy man, he ministers to many churches and conducts frequent divine services. He did not have the time to do the translation, so Fr Oleg turned to me to do it.

The fact of the matter is that I come from a Catholic family and know church life very well, the way that the church does things, I am familiar with theological books. I converted to Orthodoxy from Catholicism. I worked as a translator for the Thai government, so I had plenty of experience.

The biggest problem in translating The Law of God from English is having familiarity with theological terminology. I hope my English was not too terrible to complete this task.

—Was it difficult to translate such a thick volume-890 pages?

—I did not work alone, Fr Danai helped. He did a part of the translation.

—What was most difficult in this task, which theological terms were the most troublesome?

—The most difficult were translating liturgical texts. For instance, bell-ringing is very rare in Thai tradition. Thais have no rules in bell ringing, it is never done. Here we had to indicate when bells should be rung during Liturgy.

Now, as my Russian is improving, I want to continue translating, but from Russian, not English.

—Who is this translation for-we might call it the vulgate-for common folk, or is it intended for educational institutions of Thailand?

—This book will mainly be used by the Church itself, this is the material that people will study. Until now, Thai parishes use Church Slavonic, but the people don’t understand the language. In order to come to know the Church, and study divine services, we must translate liturgical texts into Thai. That is our most urgent need.

—That is, The Law of God is only the beginning?

—Yes, this is the first step.

Translation from the website of the Russian Orthodox Church Abroad