What is the Spiritual Significance of the Feast of the Meeting of the Lord? 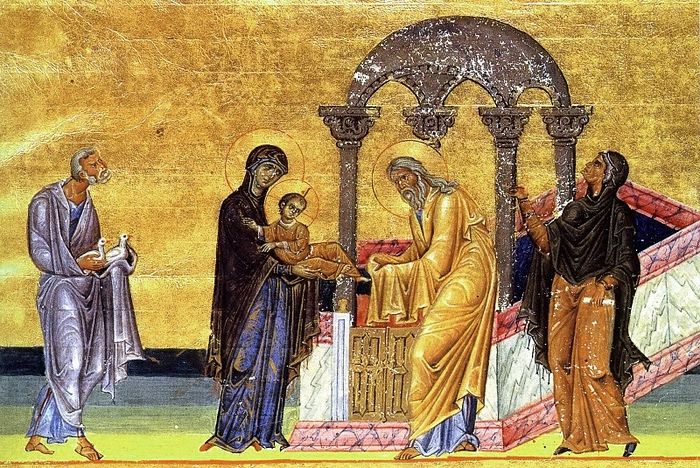 The Meeting of the Lord. Miniature from the Menalogion of Basil II, early 11th c., Vatican library (Vat. gr. 1613)

The events which gave rise to one of the twelve major feasts of the Lord, the feast of the Meeting, is, in the spiritual sense, multidimensional. The word “meeting” does not convey the full meaning of the Church Slavonic word, sretenie. Those who meet are usually equals. “But here,” as Metropolitan Benjamin (Fedchenkov) notes, “the Slavonic word, sretenie, is more appropriate, because it speaks of the lesser going out to meet the greater; people, meeting God”[1] The events in the Jerusalem temple are of particular significance. The Divine Law-Giver Himself, as one Who is the image of the invisible God, the firstborn of every creature (Col. 1:15), and as the first-born of a Virgin (Mt. 1:25) is brought as a gift to God. This symbolic act is as a beginning of the service which will end on earth by a great event: The incarnate Son of God brings Himself entirely to the Father unto the redemption of mankind—who He met earlier in the person of holy righteous Simeon. For mine eyes have seen thy salvation, which thou hast prepared before the face of all people; a light to lighten the Gentiles, and the glory of thy people Israel (Lk. 2:30–32). By its thought and expression, this song of thanksgiving originates from portions of the book of the Prophet Isaiah: And in that day there shall be a root of Jesse, and he that shall arise to rule over the Gentiles; in him shall the Gentiles trust, and his rest shall be glorious (Is. 11:10). Jesse was the father of King David. Therefore, the root of Jesse, the Messiah-Christ whom people awaited, the Son of David (cf. Mt. 1:1), Who, as two thousand years of history has shown, would become a sign of contention. This sign divides people into the believing and the unbelieving, those who love the light, and those who love darkness. “What is this sign of contention? It is the sign of the cross, which the Church confesses as being salvific for the whole world” (St. John Chrysostom). The meeting of God and man, which first took place in the Jerusalem Temple, must become a personal event for every individual. The path of salvation must begin for each person by a meeting with Jesus Christ as his personal Savior. Until this meeting takes place, one remains sitting in darkness … and the shadow of death (cf. Mt. 4:16).

On the fortieth day after the Nativity of the Infant God, another meeting also occurred—the Old Testament church and the Church of the New Testament. All the Gospel stories are penetrated with the motif of the precise fulfillment of the Law of Moses: the forty-day period of purification prescribed by Leviticus (cf. 12:2–4), the dedication of the first-born son to God (cf. Num. 3:13), and His symbolic ransom (cf. Ex. 13:13). Nevertheless, it is easy to see that the spiritual center of the events described is carried over into New Testament history. Now (Lk. 2:20) means that the time awaited by many generations for the Messiah has come. Holy righteous Simeon speaks of his departure from this world (the phrase, lettest Thou Thy servant depart is shown in both Greek and Slavonic as a present tense verb). Elder Simeon’s inspired speech is filled with praise and thanksgiving to God for fulfilling the time of the promise. According to patristic tradition, the holy Prophet Zachariah, father of St. John the Forerunner, placed the Most Holy Virgin—who came according to the law to fulfill the ritual— not in the place for women who come for purification, but in the place of virgins (married women were not allowed to stand there). When the scribes and Pharisees began expressing their displeasure, Zachariah announced that this Mother remains a Virgin and pure, even after giving birth: “Therefore I have not removed this Mother from this place appointed for virgins, because She is higher than all virgins.”

The third meeting has an ultimately personal character. For Elder Simeon, the day had come for which he had waited unusually long. It was promised to him that he would see the Savior of the world, born of an Ever-Virgin. Righteous Simeon, distinguished by his extraordinary honesty, a wise man who knew the Divine Scriptures well, labored together with seventy-two translators on the island of Pharos off Alexandria in the 380’s BC, translating the Old Testament from Hebrew into Greek. As he was translating the book of the Prophet Isaiah, he came to the words, behold, a virgin shall conceive in the womb, and shall bring forth a son (Is. 7:14). Reading this, he doubted, supposing that it is impossible for a woman to give birth without a husband. Simeon took a knife and wanted to scrape these words from the scroll, to change the word “virgin” into “woman”. But at that moment an angel of the Lord appeared to him, took his hand, and said, “Have faith in the words written, and you yourself will see their fulfillment, for you shall not see death before you shall see Christ the Lord, born of a pure Virgin.” Believing the angel’s words, Elder Simeon impatiently waited for Christ’s coming into the world, and he led a righteous and pure life. According to tradition, Elder Simeon was vouchsafed a blessed repose in the 360th year of his life. His holy relics were translated during the reign of Emperor Justinian the Younger (565–578) to Constantinople and placed in the altar of the Holy Apostle James, in the church of the Agiosoritissa.

The prayer of St. Simeon the God-Receiver (Now lettest Thou Thy servant depart in peace, O Master) in sung (on feast days) or read (during simple services) at each Vespers service, so that at the close of each day, every believer would remember the meeting of his life, which will end in departure from this temporal life. We must live in peace with God and fulfill the Gospel commandments, so that—like Simeon—we might meet that bright and never-ending day in the Kingdom of Heaven.